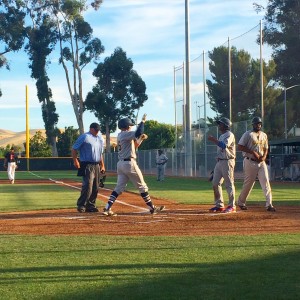 Demetrius Banks turned in another solid start, working his way out of jams and keeping the Diamonds offense at bay over six solid innings on the way to the victory. Michael Cerda and Josh Wong provided the thump, chipping in a home run each, and combining to drive in four of the Admirals five runs on the night.

The Admirals jumped on Pittsburg starter James Trebus early. Jaylen Harris walked to lead off the contest, and quickly stole second and third base. PJ Phillips followed with another walk, setting up runners at the corners for Cerda. The third baseman put a charge into the first pitch he saw, sending a towering shot over the left field wall for a three run shot.

“I’ve been struggling a little lately,” explained Cerda, “so I was really just trying to do less. Less is more. And I’ve been taking some outrageous hacks and not sticking to the plan, so today my approach was just to wait for something that I could handle. He threw me a first pitch fastball that I was ready to hit, and I got lucky and hit a bomb. That’s the way baseball goes.”

The Diamonds got one back in the third inning. After having Cerda’s home run sail over his head, the formal Admiral, Brandon Williams, notched one of his own. On a 3-2 count he sent a liner that got out of the park in a hurry for a solo home run, cutting Vallejo’s lead to 3-1.

In the fifth, however, the Admirals made it a three-run game once again.

Tony Uyeno led off the inning with a single down the right field line. Another single and a double play ball later put Uyeno at third base with two outs. Up stepped Phillips, who worked a full count before sending a liner that dropped in front of the centerfielder, driving in Uyeno to make it 4-1.

In their half of the fifth, Pittsburg put together a rally, but as he did every time he ran into some trouble, Banks pitched his way out of it unscathed.

Two walks and a bloop single loaded the bases for the Diamonds with just one out. Banks then struck out the always-dangerous Mike Taylor, and got Rich Mejia to ground into a fielders choice to end the inning.

“With runners on I bear down a little bit more, and I and try to be a little finer with my location,” said Banks. “But for the most part I keep the same mind set, just trying to throw a lot of strikes and force contact, and if I’m up 0-2 then go for the strikeout, and it all worked out.”

“He made big pitches when he had to,” added manager Garry Templeton II. “He battled and got out of some sticky situations, and that’s what you have to be able to do as a pitcher sometimes, just try to minimize the damage. And luckily he got out of it without allowing any damage.”

Wong added to the Vallejo lead in the sixth. With one down in the inning, and on a 1-2 count, Wong sent the delivery over the wall for a solo home run that would prove to be the game winner. The shot extended the Admirals lead to 5-1.

“He was coming in hard fastball,” said Wong. “That’s why I had popped up to first base in my previous at bat, he was jamming me inside. Then he got to two strikes, and he hung a slider that I got extended on.”

“I hope it’s a turning point,” said Templeton on his previously slumping sluggers Cerda and Wong. “They’ve settled down and are working on just hitting line drives. When pitchers make mistakes they’re capable of hitting the ball over the fence, but just focusing on putting the ball in play and hitting it hard to all fields.”

After a strong final inning, Banks handed the ball to the bullpen to begin the seventh.

Steve Thompson entered, who was working on a streak of six consecutive scoreless appearances. In his second inning of work, the Diamonds ended his streak, but Thompson minimized the damage.

In what was a near mirror image of Williams’ solo home run five innings prior, Mejia led off the eighth with a low liner that just snuck over the wall for a home run, making it a 5-2 ballgame.

Finally, in the ninth, Pittsburg wouldn’t go down without a fight, in what would be a very odd final frame.

The reliable Bryan Escanio was called on to close it out, but uncharacteristically ran into some trouble.

After a quick first out, Williams reached with a single. Escanio was then bizarrely called for two balks on consecutive deliveries, the second of which Scott David swung at, and the home plate umpire allowed to play out. David would reach on an infield single, putting runners at first and third. Tyler Nordgren came up huge, throwing out David trying to steal for the second out of the inning.

After a Nick Oddo walk, Taylor put a charge into one, sending it to deep center field. Jaylen Harris appeared to be fooled on the trajectory a bit, taking an odd route, allowing the ball to fall on the warning track for a double, scoring both Williams and Oddo to make it 5-4.

With the tying run sitting at second base, Escanio got Mejia to hit a routine fly ball to right field that Uyeno easily pocketed to seal the win.

The victory gives Vallejo two in a row, putting their seven game losing streak in the rear view mirror.

“The vibe is definitely better,” said Cerda after the win. “You can tell that people are buying in now, people believe in what coach is preaching. This was a big win for us, we still have a lot of games to play, but this helps get us back in the motions and back where we need to be.

“I think we’ve relaxed a little bit,” added Templeton. “We’ve gotten back to playing the type of baseball that we need to play in order to win, and we just needed to get that feeling back. And we were able to get that feeling back, to make plays, to be in a clutch situation and come through, so hopefully that will continue to carry over to the next few games.”

The Admirals will look to make it three in a row, as they send ace David Dinelli to the mound tonight, in game two of this series in Pittsburg. The action gets underway at 7:00 PM.