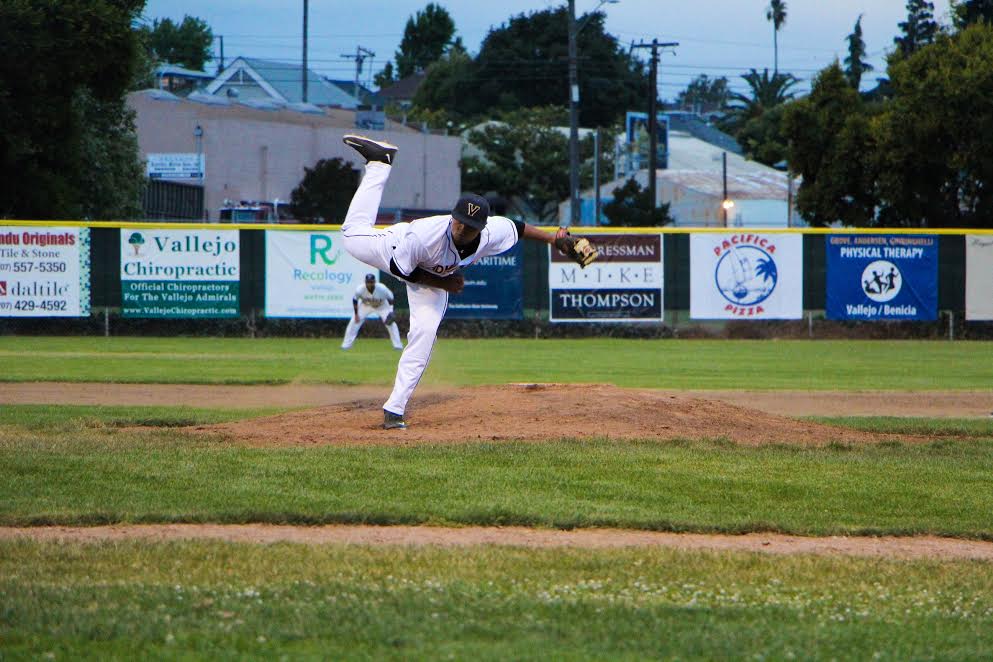 VALLEJO, Calif. – When the Sonoma Stompers played the Vallejo Admirals on Wednesday night they didn’t have a crowbar. They didn’t know a combination to a safe, they weren’t wearing ski masks and they didn’t have John Dillinger by their sides.

But they did seem to steal a game.

Although the Stompers had just as many hits as the Admirals (5), Sonoma did steal eight bases and constantly had runners in scoring position in an eventual 4-1 win.

The Stompers stole one base in each of the first five innings, while also stealing two bases in the sixth and one more in the ninth in their win. It was the second of a three-game Pacific Association series between the two teams. The Admirals will look to avoid the sweep on Thursday.

“We need to hold runners on better and change our looks so we can give our catchers a chance,” Admirals manager P.J. Phillips said. “We walked too many people and we were striking out too many times. We can’t do both and expect to win.”

The Stompers (5-0) scored first in the top of the second inning when Marcus Bradley walked, stole second and later scored on a sacrifice fly to center by Yuki Yasuda to make it 1-0.

The Stompers added to the lead in the top of the fifth when Matt Hibbert was hit by a pitch and then scored when Matt LoCoco tripled off the wall in right field to make it 2-0.

Vallejo starter Joe Watson continued to have trouble in the fifth, as he walked two more of his seven batters in the inning. Benicia High and San Francisco State graduate Peter Reyes replaced Watson with the bases loaded and nobody out and got Brennan Metzger, Kevin Farley and Daniel Comstock to strike out and limit the damage to just one run.

“My fastball was working well and that has been my primary pitch,” Reyes said. “I had four days off so that kept my arm fresh and things were able to work out in that inning.”

Reyes (pictured) struck out the first batter of the sixth, but the Admirals defense faltered just moments later. Yasuda reached base on an error by Pedro Perez and then Reyes threw the ball away on a pickoff attempt. Admiral right fielder Chevy Clarke then threw the ball away and Yasuda was standing on third with one out. The Stompers made the errors hurt even more when Hibbert chopped a high grounder to short that Perez handled, but with the infield in, it fell for a hit and Yasuda scored to make it 3-0.

Meanwhile, Sonoma starter TyRelle Harris was on cruise control during the first six innings. He struck out eight during that span and only allowed two hits. At one point he retired 10 batters in a row from the third to the sixth inning.

“I don’t know what he did,” Phillips said. “He threw a lot of strikes that’s for sure. He was able to get in a rhythm in the third and fourth inning by just throwing a lot of strikes.”

In the bottom of the seventh, however, the Admirals (2-3) finally got to Harris. Nick Akins and Andrew Rubalcava led of the inning with back-to-back singles. With one out Graylin Derke then drove home Akins with a single to center to make it 3-1.

“I’ve been struggling recently at the plate so I just wanted to put something in play,” Derke said. “I wanted to get my foot down, stay in the middle of the field and try not to get too big.”

The Admirals had runners on first and third with one out, but Harris settled down to strikeout Shawn Payne and then induced Manny DeLeon to line out to short to end the threat.

Whatever momentum the Admirals gained in the seventh, however, was soon lost as the Stompers had their first two runners reach via a walk by Farley and then a double off the wall by Comstock. Farley scored with one out when Hibbert had a sacrifice fly to right to make it 4-1.

Despite the loss, the Admirals are confident they can bounce back.

“It’s still early,” Phillips said. “We need to keep grinding in our at bats. We’ll figure it out, trust me.”