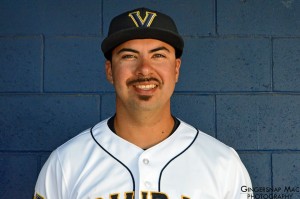 Vallejo, CA – The Vallejo Admirals Professional Baseball Club has announced some shuffling to their roster. Outfielder Jordan Hinshaw has been traded to the Pittsburg Diamonds in return for infielder Aaron Brill. They have also re-acquired pitcher Tony Guerra from the San Rafael Pacifics for a player to be named later. Finally, the Admirals have signed infielder Gadiel Baez, and released infielder Danny Martinez.

Brill is a Felician College product, graduating in 2014. In his senior season he hit .363, and was named the Daktronics NCAA Division II East Region Player of the Year, as well as the Central Atlantic Collegiate Conference Player of the Year. He made his professional baseball debut with Quebec Capitales of the Canadian American Association, before joining the Diamonds for the 2015 season.

The slick fielding Brill gives the Admirals a sure handed defender, a weak point for Vallejo at times this season, and flexibility with his ability to play second base, third base, and shortstop.

“This year he has struggled with the bat a little,” said manager Garry Tempelton II, “but you can see how good his glove is. And that’s something that we’ve been struggling with up the middle, having a consistent glove out there. So pitchers can throw the ball and know that it’s going to get caught behind them, and not even have to worry about it. So they’re more confident in throwing those strikes and knowing they’re going to be outs.”

Brill’s bat has come to life with the Admirals though, going two for three in his first game, and sparking a four-run rally with two-outs in his second game.

Guerra is a familiar face for the Admirals, having spent the 2014 season with the team. The Cal State San Bernardino graduate sported a 3.52 ERA over 26 appearances, including five starts and nine saves for the navy blue and gold last season. After a brief stint with the Saraperos de Saltillo of the Mexican League this year, he returned to the Pacific Association with the Pacifics. In two appearances, one start, he tossed seven innings, allowing eight hits and two runs, while walking four and striking out four.

“I like what he did for us last year,” said Templeton, “so San Rafael offered him up and I jumped at the chance to get him back and strengthen our bullpen. Our bullpen has been doing a good job, but he definitely makes it stronger.”

Baez is a making his professional baseball debut with Vallejo, after having recently graduated from Tabor College. During his senior season with the Tabor Bluejays, Baez hit .317 with six home runs and 36 RBI, to go along with an impressive .422 OBP and a team leading 27 stolen bases. Baez helped the Bluejays go 54-12, and earn a NAIA World Series berth.

“He’s a smaller guy, but has a lot of energy,” explains Templeton. “That’s the scouting report I got. He’s a guy who likes to move around, and he’s solid defensively. But that’s what I’m looking for from him, to just give it that college try, to go after it hard and get dirty and give it all he’s got.”

With the second half quickly approaching, Templeton continues to tweak his roster in an effort to best prepare for a run at a second half title. Last week, Vallejo native Tony Uyeno was activated, followed by these three additions. With some fresh faces in the fold, and the potential for more coming, the Admirals will look to put their first half struggles behind them.