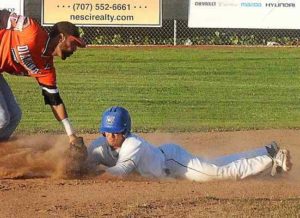 While Jose Canseco has been trying to re-invent himself as a knuckleball pitcher, David Dinelli (4-7) fired seven excellent innings on Wednesday and the Vallejo Admirals beat the Canseco-led Pittsburg Diamonds 9-2 to even up the series at Wilson Park.

The right-hander from Folsom allowed just three hits and two runs, one earned. He struck out six and walked two while following up a strong outing last week in San Rafael.

“I’ve just been able to locate multiple pitches,” Dinelli said. “Earlier in the year I was going out there with pretty much just a fastball. My secondary pitches just weren’t sharp. In my past few games now, my curve ball and my slider have had a nice, good snap to them and I’m able to keep guys off balance a little better.”

Canseco, the former Bash Brother and Oakland A’s slugger, made his first appearance playing in Vallejo. He went five innings, allowing nine runs while walking six and hitting two others. The 52-year-old last pitched against the Admirals last year in the season finale in Pittsburg.

The top of the Admirals’ order was especially potent as Gadiel Baez and Darian Sandford reached base eight times in 10 plate appearances.

“It’s sort of like batting practice where you just see the ball and try to drive the ball up the middle,” Sandford said about hitting a knuckleballer like Canseco. “Today, I was able to hit the ball hard a couple of times. I started off with a bunt and got my rhythm down. I felt pretty good in the box seeing the knuckleball.”

“Sometimes our infield isn’t the greatest,” Sandford said. “Sometimes you can hit the ball on the ground and get a nice bad hop. I’ve seen it a few times. Luckily, it was on my side today.”

The Admirals scored three more times in the fourth to lead 7-2. Canseco hit two batters in the inning, balked in a run and a misplay from Kiriokos that was called a Sandford hit by the Admirals contributed to the rally.

Vallejo added two more in the fifth against Canseco to lead 9-2. Player-manager P.J. Phillips homered over the center field fence and Silva added an RBI single.

That was plenty for Dinelli, who retired nine in a row at one point and surrendered just one hit after the first inning. The first could have been disastrous as Perez made two errors and Dinelli allowed a long two-run home run to Nick Oddo as the Diamonds (27-35, 8-15) led 2-0.

Dinelli and Canseco faced each other in 2011 in the North American Baseball League, with Dinelli pitching for Maui and Canseco hitting for Yuma.

“They were interesting,” Dinelli said about those matchups. “He actually charged the mound against me one time so that was exciting but we had a few good battles out there.”

Notes: The Admirals were missing two of their best hitters in Tim Williams and Gerald Bautista, who were both banged up. … Brill, the right fielder, made a spectacular catch in the fourth inning, sliding into the fence to rob Tyler Nordgren. … Pitcher Josh Evans made a rare hitting appearance, grounding out to end the eighth. … The two teams will conclude the series on Thursday with a home run derby at 5:30 p.m. featuring two Admirals, two Diamonds (including Canseco) and two local high school baseball players.