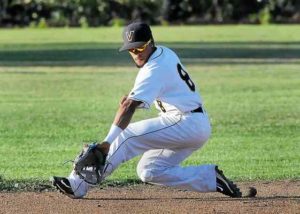 The Vallejo Admirals looked like they enjoyed erasing the chalkboard on Friday evening after skidding into last place in the first-half standings in the Pacific Association.

The Admirals probably wanted to throw out the chalk and erasers away too after finishing nine games under .500 and eight games out of first place.

Starting the second-half slate with a bang, Vallejo used strong pitching and timely hitting to beat the Sonoma Stompers 8-3 to start a three-game series at Wilson Park.

The Stompers clinched the first-half title and will play the winner of the second half for the Pacific Association crown after the end of the regular season.

“Starting brand new always feels good,” said player-manager P.J. Phillips, who was 3-for-3 and reached base four times. “It’s a long season. We’re going to try and win the second-half. We’re trying to start off fast and get some W’s.”

The Admirals (16-24) got a better-than-usual crowd on Friday, some of the fans checking out Sonoma’s female starting pitcher Stacy Piagno.

Piagno fared well in her first two innings but the Admirals chased the 2016 Team USA pitcher with a four-run third inning.

Leading 1-0, Gadiel Baez reached on an infield single as first baseman Daniel Baptista was late covering first base. Piagno balked Baez to second and Darian Sandford reached on a bunt single and Sandford stole second to put runners at second and third.

Third baseman Gerald Bautista roped a single to left to score both runners and make it 3-0. That ended Piagno’s evening as reliever Gregory Paulino entered the game.

Phillips greeted Paulino with an opposite-field, two-run homer to right to make it 5-0. Phillips had singled to right field to open the second inning and scored on Lydell Moseby’s RBI single as well.

“That’s my game plan,” Phillips said. “I’m trying to stay on the ball a little longer so it helps me stay closed and see the ball.”

Moseby had good things to say about Piagno, one of two females on the Stompers’ roster although her teammate, Kelsey Whitmore, was away attending a Team USA event.

“She is a solid pitcher,” Moseby said. “She spots up well and throws her off-speed extremely well. She’s very good. I hope she sticks with it.”

The Admirals made it 6-0 in the fourth against Paulino when Baez walked and eventually scored on a wild pitch.
The Stompers (23-17), however, didn’t go away. Slugger Joel Carranza broke up the shutout with a long solo homer against starting and winning pitcher Roman Gomez (3-2) in the sixth.

That ended a string of 12 in a row for Gomez, who pitched brilliantly for six innings, allowing just four hits and one walk while striking out three against a loaded Sonoma lineup.

“He was throwing first-pitch strikes,” Phillips said. “He had a good fastball and he was painting his spots and the changeup was working well for him too.”

The Stompers made it 6-3 in the seventh against reliever Robert Brown as Caleb Bryson was hit with a pitch to begin the inning and eventually scored on a wild pitch. With one out, Mason Morioka homered over the left-field wall.

That was all the Stompers would get as Pedro Perez and Joe Watson combined to pitch the final 2 1/3 innings.

Meanwhile, Vallejo added two more runs in the bottom half of the seventh when Phillips singled and scored on Wilfredo Petit’s long double to center and Petit scored on Aaron Brill’s sacrifice fly.

Brill, the Admirals right fielder, made the play of the game in the third, robbing Carranza of extra bases with a diving catch in right-center.

Notes: With Piagno’s outing, the Vallejo Hurricanes fastpitch softball team was in attendance and helped take part in pregame festivities and between-inning games. … Piagno’s most impressive inning was the first when she registered a 1-2-3 inning, including a strikeout of Baez to start the frame. … Even with the win, the Admirals are 5-11 against the Stompers this season. … Sandford stole two more bases and has a league-leading 28.