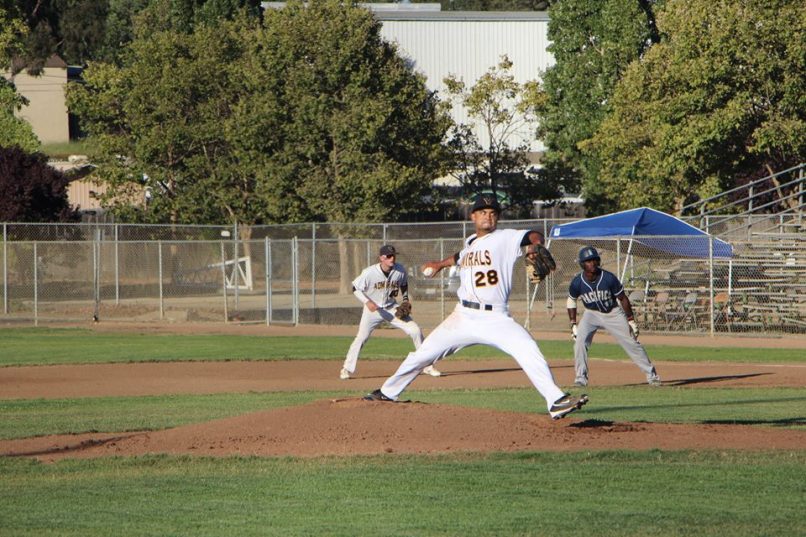 VALLEJO, Calif. – The Admirals wiped away the first half of Pacific Association play with a 5-4, comeback victory over the Pittsburg Diamonds on Tuesday night at Wilson Park. Vallejo fell behind 2-0 early, but manufactured three runs in the third inning to grab its first lead and held on for the win with two runs in the fifth.

Admirals starter Peter Reyes (pictured) picked up his second victory of the season after going 5.2 innings and allowing three earned runs with five walks and three strikeouts. Vallejo improved to 12-25 overall and 1-0 in the second half of Pacific Association action.

After Pittsburg scored single runs in both the second and third innings, the Admirals found the answer against Diamonds starter Travis Blackley and scored three times in the third after an RBI triple by Vladimir Gomez, run-scoring single by Tillman Pugh and a sacrifice fly from David Kiriakos.

Blackley, the former major leaguer, struck out the side in both the first and second innings and seven of the first eight Admirals hitters that he faced, finishing with a season-best 11 strikeouts in his eight innings.

Leading 3-2 in the fifth, Vallejo scratched two more runs across after a bunt single by Tillman Pugh and an error by Pittsburg second baseman Ordomar Valdez pushed home Deybi Garcia and an RBI fielder’s choice from Mike Blanke plated Pugh.

Pittsburg scored once in the sixth after an RBI double by Wes Wallace brought in BJ Guinn. The Diamonds rallied for a run in the ninth inning against Admirals closer Sammy Gervacio, after an RBI sacrifice fly from Javier Marticorona brought home Jose Garcia. Gervacio got Guinn to fly out to center and preserve the victory for the Admirals.

For Gervacio, it was his seventh save of the season, which ties him for the Pacific Association lead heading into Wednesday’s second game of the series.

Admirals reliever Mahlik Jones continued his impressive beginning to his professional career with 1.1 innings of scoreless relief with a pair of strikeouts. Jones got Garcia to fly out to center in the sixth inning, as Pittsburg stranded the bases loaded.

The Admirals host Pittsburg for the second game of the series at 6:35 p.m. PT Wednesday from Wilson Park in Vallejo. The Admirals pregame show begins at 6:15 p.m. with Dave Grant on the Admirals Baseball Network.

NOTES: Pugh has now hit safely in three consecutive games and has reached base in six straight … Chevy Clarke extended his on-base streak to seven games after a double in the fourth inning … Vallejo improved to 5-2 this season in one-run games … the Admirals are now 10-1 when taking a lead into the ninth inning … Gomez scored twice on Tuesday and has now scored six runs in his last eight games overall … Tuesday’s game was the 100th between Vallejo and Pittsburg, with the overall series tied, 50-50.