Admirals Bring Back Reigning Rookie of the Year Hutchinson

VALLEJO, Calif. – Six-game winner and 2016 Pacific Association Rookie of the Year Marquis Hutchinson has re-signed with the Admirals for the upcoming 2017 season. The right-hander went 6-5 with a 3.61 ERA a season ago, while becoming the second Admirals player to win the prestigious award.

“I’m very excited and thankful that the Admirals want me back,” Hutchinson said.

He made 19 appearances a season ago with 11 coming as a starter. His 89.1 innings worked were the sixth-most by any pitcher in the four-team Pacific Association, and his ERA was good for the eighth-lowest total in the league.

The young hurler is looking forward to taking the next step in his maturation on the mound. “This season I want to discipline myself more on the field and work on my location,” Hutchinson commented. “I want to stay more behind on the ball and follow through on my pitches.”

From June 26 until the end of the regular season a year ago, Hutchinson won five times and 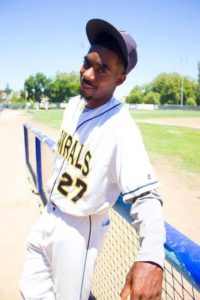 recorded four outings with at least five strikeouts. During a 6-2 road victory over Sonoma on July 10, Hutchinson delivered a season-best nine strikeouts while allowing only one run in six innings.

Hutchinson joined veteran David Dinelli (99.1 innings) and Roman Gomez (93.2) as Admirals pitchers who tossed at least 89 innings – the only Pacific Association team to have three arms in the Top-6 in the statistical category.

“Hutch” as his teammates refer to him, is excited to return for his second season with the Admirals, and looks to build off the success that the team enjoyed during the second half of Pacific Association play. He also is looking forward to Phillips being the team manager from the get-go this year.

“I expect him to already have a game plan and get any bad seeds out before they get planted. He did a great job last year even though he hadn’t done it before.” Hutchinson noted. “He knows baseball, he’s been there and done that, and I see him passing his knowledge down to others.”

The Admirals open the 2017 season at 6:35 p.m. June 2 at Wilson Park versus the San Rafael Pacifics. Tickets are still available and can be purchased at the gate before the game or online by visiting vallejoadmirals.com.