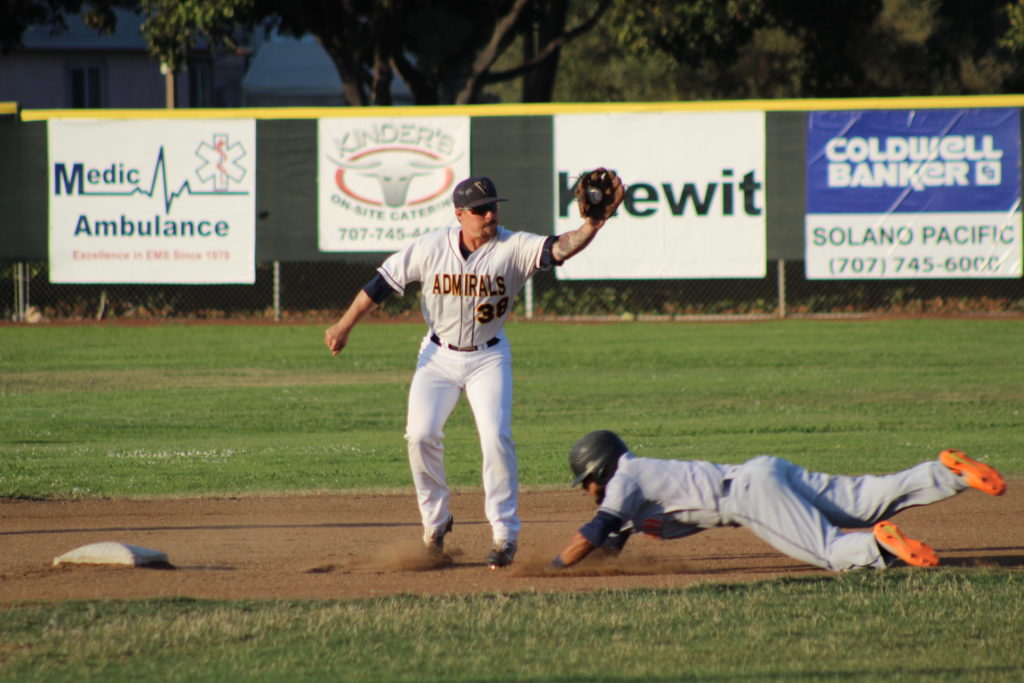 The Sonoma Stompers needed ex-Admiral Erik Gonsalves to help end their skid against their Pacific Association rivals on Thursday at Wilson Park.

Gonsalves pitched five-plus innings to quiet a streaking Admirals team, and the Stompers salvaged the final game of a Pacific Association series with a tense and sometimes chippy 4-3 win.

Both teams are again tied for first place in the second-half standings and Sonoma (44-22, 16-11) ended a seven-game skid to Vallejo (28-38, 16-11) in the process. The two teams play one another six more times, including three in Sonoma starting on Friday.

Gonsalves, who played for the Admirals in their inaugural season of 2013 and hails from nearby Fairfield, gave his team a badly needed shot in the arm. He allowed six hits and two runs (and just one hit through four innings).

Just as importantly, the right-hander did not allow Vallejo to score in the first inning. The Admirals put up four in the series opener on Tuesday and 10 more in the second game on Wednesday.

“He kept the ball down,” Admirals manager P.J. Phillips said. “In hitter’s counts, he was mixing it up a little bit. He pitched well and kept them in the game.”

The Admirals stranded 12 runners in the contest, seven in scoring position, including runners at first and third to end the game as Stompers closer Jacob Cox induced a ground ball from Graylin Derke to end it.

Bethel High grad Ignacio Diaz had the first two hits against Gonsalves with doubles to left in the second and fifth innings.

“I was just trying to see it and try and go up the middle,” Diaz said. “Fortunately, I was able to hit it left-center.”

Sonoma went up 2-0 in the first inning against Admirals starter David Dinelli.

Matt Hibbert was hit with a pitch to begin the inning and Scott David bounced a single to right. A wild pitch from Dinelli moved the runners to second and third and that was crucial as Joel Carranza’s ground ball scored Hibbert. Daniel Baptista followed with an RBI double to right-center to score David.

The Stompers went up 3-0 in the fourth when Yuki Yasuda fisted a single to center to score Baptista, who had singled to lead off the inning. Admirals center fielder Tillman Pugh, however, threw out Brennan Metzger, who tried to sneak home on the single as well. Sonoma made it 4-0 in the fifth when Baptista’s RBI single scored David.

Dinelli went six innings and allowed the four runs but was much more effective in innings two through six.

“After that first inning, I think I hit my rhythm, I hit my stride,” Dinelli said. “I did what I had to do to keep us in the game, keep us right there to try and get that comeback.”

The Admirals cut the lead to 4-2 in the fifth as Diaz crushed a double to left. Chris Fornaci doubled to right to score Diaz and make it 4-1. After one was out, David Kiriakos singled home Fornaci to cut the lead in half.

The Admirals had a chance for more but Gonsalves induced a 6-4-3 double play from Pugh to end the inning.

The Admirals had numerous threats against the Stompers’ bullpen in the late innings. They finally came through in the ninth against Cox as Pugh singled to score Chevy Clarke to make it 4-3.

Despite the loss, Vallejo has gone 15-5 over its last 20 games to make it a race in the second half.

Notes: Admirals reliever Alex Fishberg struck out five of the seven batters he faced after coming in for Dinelli. … Tim Holmes pitched a 1-2-3 ninth inning to keep the deficit 4-2. Pugh extended his hitting streak to 17 games with the single in the ninth. … The Admirals came out of their dugout and words were exchanged after reliever Logan Gillaspie struck out Fornaci to end the sixth but order was quickly restored.