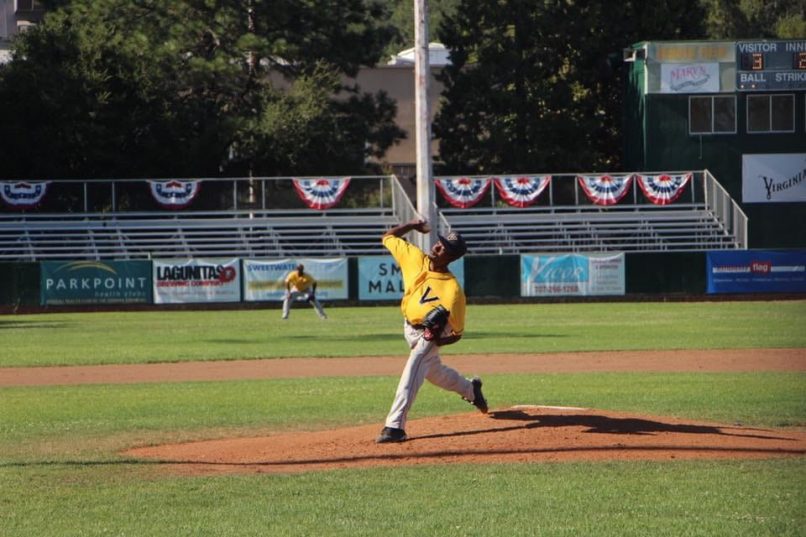 SONOMA, Calif. – The Admirals took advantage of an error by the Stompers and grabbed an early lead behind Marquis Hutchinson, who shut out the Stompers through 6.1 innings as Vallejo won the series opener 4-0 over Sonoma at People’s Home Equity Ballpark at Arnold Field.

The Admirals won for the ninth time in 12 games overall and improved to 10-9 in the second half of Pacific Association play – just two behind front-running Sonoma – and 22-36 overall, while the Stompers are 12-7 in the second half and 40-18 overall.

Hutchinson (pictured) allowed his first hit with one out in the fifth and struck out six to improve to 5-5 this season and moved into third place in Admirals franchise history with 11 career victories. The right-hander allowed only four runners (one on an error) and allowed just two hits in his second win over Sonoma this season.

Vallejo struck first in the second after a groundout from Chris Fornaci brought in Shawn Payne and a sacrifice fly from Quintin Rohrbaugh plated Ryan Rodriguez for a 2-0 lead. An error by second baseman Yuki Yasuda enabled Rodriguez to reach after Payne had led off with a single.

The Admirals added to their lead in the sixth after three consecutive hits – all with two outs – a double from Vladimir Gomez, an RBI double by Fornaci and Rohrbaugh drove in Fornaci with a single.

Leading 4-0, Hutchinson worked into the seventh and lefty Andin Diaz relieved him with one out and struck out Isaac Wenrich with Joel Carranza at first. Diaz got Brennan Metzger to strike out swinging and strand Carranza at first.

In the eighth, Rodriguez reached on an error by Sonoma shortstop Derrick Fox and Fornaci doubled down the left field line to give the Admirals runners at second and third. Rohrbaugh struck out looking to end the threat by Vallejo.

Diaz walked Marcus Bradley and pinch-hitter Eddie Mora-Loera to open the bottom of the eighth and got Fox to ground out to first. With runners at second and third, Yuki Yasuda grounded out to short, scoring Bradly from third. Diaz made a tough play on a chopping ground ball back to him from Matt Hibbert to strand Mora-Loera at third.

In the ninth, Tillman Pugh singled with two outs against Mike Jackson, Jr. but Mike Blanke grounded out to third. The Admirals’ Sammy Gervacio got the call in the ninth inning and got two quick outs before walking Isaac Wenrich and giving up a two-out single to Metzger. With the tying run at the plate, Gervacio struck out Bradley for his franchise single-season record 12th save of 2017.

Sonoma starter Juan Espinosa worked six innings and allowed six hits and four runs (three earned) with seven strikeouts and no walks. Espinosa hit a pair of batters and fell to 5-3 this season.

The Admirals and Stompers are scheduled to play the second game of the series at 6 p.m. PT Wednesday from People’s Home Equity Ballpark at Arnold Field in Sonoma. The Team Superstores Pregame Show begins at 5:45 p.m. with Dave Grant and Tim Fitzgerald.

NOTES: Pugh extended his hit streak to 10 games with a single in the first … Fornaci drove in a pair of runs and was hit by his Pacific Association single season high 20th pitch in the fourth inning … Rohrbaugh drove in a pair of runs in the victory and collected two more hits, giving him 16 hits and seven RBI through his first 13 games as an Admiral.