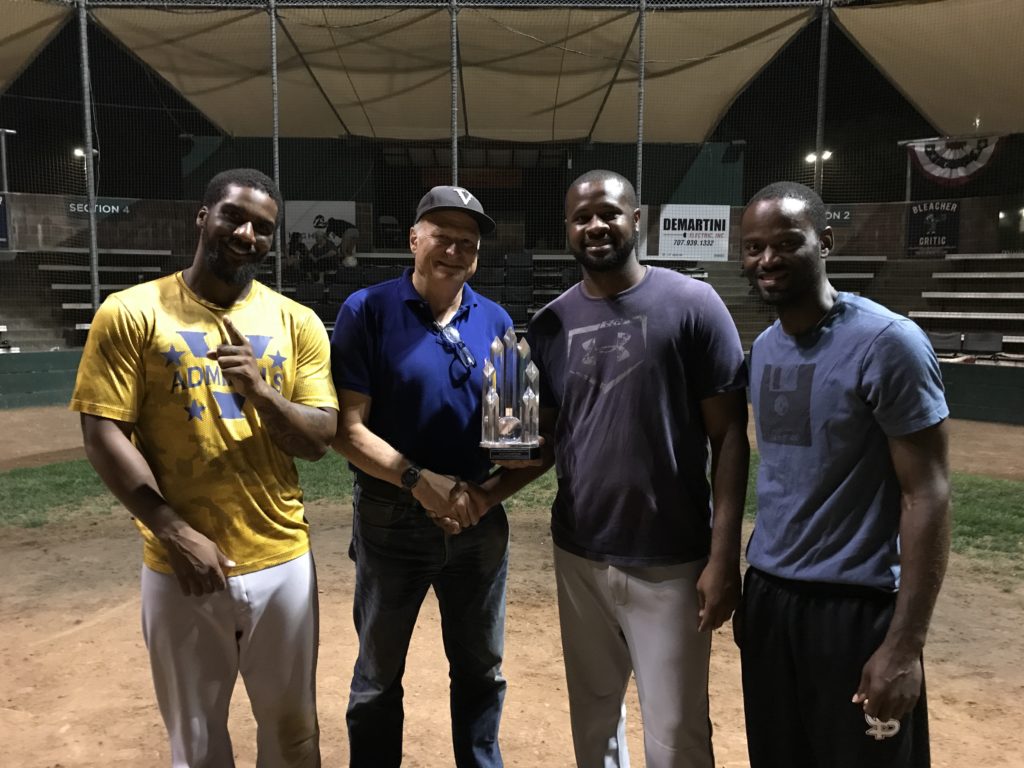 SONOMA, Calif. – The Admirals took a 9-1 lead after four innings and held on to beat the Stompers, 11-8 as Vallejo captured its first Pacific Association championship in franchise history on Friday at Peoples Home Equity Ballpark at Arnold Field. Vallejo completed an improbable 25-game turnaround and finished 25-15 in the second half after going 12-27 in the first half.

The Admirals scored five runs in the fourth inning, got a solo home run from Chris Fornaci in the eighth and managed to hold off Sonoma, which was seeking its second straight title.

Andin Diaz took over for Alex Fishberg in the seventh and worked 2.2 scoreless innings for the Admirals. With the tying run at second base for Sonoma in the seventh, he struck out Scott David and Brennan Metzger and retired the Stompers in order in the eighth. He got the final three outs in the ninth to preserve the championship victory for Vallejo and collect his first save of the season.

Fishberg (5-2) allowed an earned run in 1.1 innings with two walks and a strikeout to pick up his fifth win of the season.

Vallejo scored twice more in the third inning after Chevy Clarke and Quintin Rohrbaugh scored to give the Admirals a 4-1 lead.

In the fourth, the Admirals took a 9-1 advantage after Sonoma starter TyRelle Harris gave up a leadoff single to Blanke and walked Graylin Derke. Chris Fornaci bunted to third and pushed Blanke to third and Derke to second. Rohrbaugh drew a walk off Harris and Clarke was hit by a pitch to force in the fifth run of the game for the Admirals.

Logan Gillaspie took over for Harris and walked David Kiriakos, which scored Derke and gave the Admirals a 6-1 lead. Tillman Pugh (pictured above) doubled and plated both Rohrbaugh and Clarke, as Vallejo took an 8-1 advantage. Shawn Payne singled and scored Pugh, as Vallejo grabbed a 9-1 lead.

Sonoma scored once in the bottom of the fourth after Marcus Bradley singled home Isaac Wenrich.

With Vallejo leading 9-2, Sonoma scored four times in the fifth – a solo home run by Joel Carranza and single from Masa Miyadera brought in a run – as the Stompers began their massive comeback and inched closer at 9-6.

In the sixth, Carranza walked to lead off for the Stompers and was brought in on a bases loaded walk drawn by Yuki Yasuda against Tim Holmes. Sonoma left the bases loaded in the sixth after Bradley flew out to left to end the threat.

Matt Hibbert led off the bottom of the seventh with an infield single to shortstop and Derrick Fox brought him home with a single to center field. Diaz took over for Fishberg with one out and Fox at first and struck out Scott David swinging. Fox stole second and moved into scoring position for Sonoma, but Diaz got Brennan Metzger swinging to end the inning.

Chris Fornaci hit his ninth home run of the season with one out in the eighth to give the Admirals a 10-8 lead after Sonoma had scored seven unanswered runs. DJ Sharabi took over for Gillaspie and struck out Rohrbaugh and Clarke swinging.

Diaz retired the Stompers in order in the eighth, getting Miyadera to ground out to first, Wenrich to line out to third and Yasuda to fly out to center.

In the ninth against Sharabi, Akins Sr. drove in Kiriakos with a sacrifice fly to give the Admirals an 11-8 lead.

NOTES: Pugh extended his career-best and season-high on-base streak to 34 games after his double in the fourth … in what could be the final appearance in his professional career, Banks left with a 9-4 lead in the fifth inning … Blanke finishes the season with a seven-game hit streak after his homer in the second … Pugh ended his season with 96 hits, 18 home runs, 30 stolen bases, 72 runs scored and 61 RBI … Kiriakos has now won three Pacific Association titles (San Rafael in 2014 and 2015) and one with Vallejo.