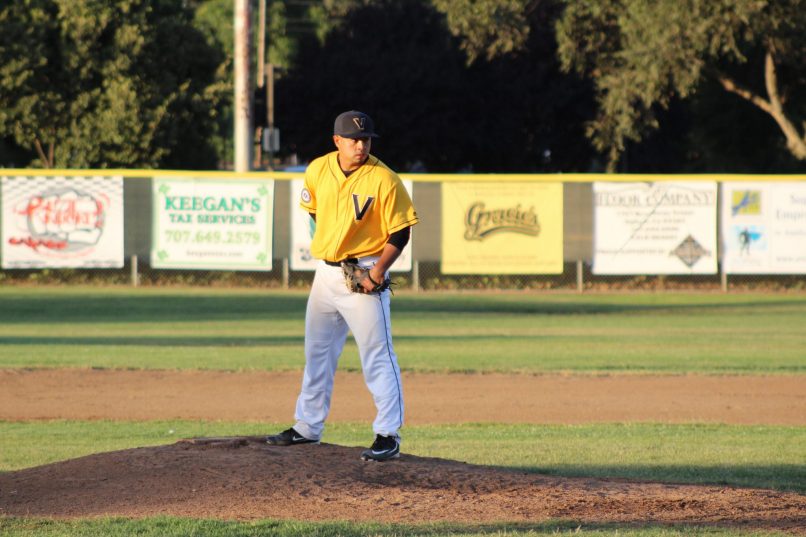 SAN RAFAEL, Calif. – Behind a career-high seven strikeouts from starter Peter Reyes and a two-run home run from Nick Akins Sr., the Admirals captured the Pacific Association second half title with a 12-5 victory over the Pacifics at Albert Park. Vallejo advanced to Friday’s championship game versus Sonoma and for the first time in franchise history will play for a Pacific Association title.

The Admirals completed an improbable 24-game turnaround from the first half, finishing 24-15 in the second half after going 12-27 to open the season. For the first time in franchise history, the Admirals won a Pacific Association half title after getting within one game in 2014.

Friday’s championship game will be played at Peoples Home Equity Ballpark at Arnold Field at 7 p.m. PT. The Admirals captured the second half title after Sonoma beat Pittsburg, 5-3. With both teams concluding the final half with a 24-15 record, Vallejo held the tiebreaker by beating the Stompers in seven of the 12 second-half meetings.

Vallejo finished the regular season with a 36-42 overall, while San Rafael had their season end at 32-46.

Reyes (4-1) collected his fourth victory of the season and allowed only three earned runs and six hits allowed in six innings.

The Pacifics took an early lead after Mark Lindsay and Cameron Monger singled to open up the bottom of the first. After Juan Herrera struck out, Jake Taylor singled home Lindsay to give San Rafael a 1-0 lead.

San Rafael starter Brandon Erickson shut out the Admirals for three innings with only one hit allowed, but in the fourth, Vallejo was the recipient of six walks from reliever Harry Shapiro and took a 4-1 lead after a walk forced in a run, a wild pitch scored Chevy Clarke and Graylin Derke drove in a pair with a double down the right field line.

Nick Akins Sr. provided the Admirals more breathing room in the fifth inning with a two-run home run – his 15th of the season – providing Vallejo a 6-1 advantage.

San Rafael trimmed the deficit to four after Michael Rizzitello was hit by a pitch to lead off the bottom of the fifth and came in to score after a single by Phildrick Llewellyn.

In the sixth, Vallejo extended their lead to 9-2 after San Rafael reliever Michael Holback walked four batters – including a bases loaded walk to Chevy Clarke that scored Rohrbaugh. A single by Mike Blanke scored Akins Sr. in the three-run sixth for the Admirals.

San Rafael answered back in the sixth with a run of their own after pinch-runner James McReynolds scored on a two-out single by Ricky Gingras.

With Vallejo leading 9-3 in the seventh, Andin Diaz took over for Reyes and walked Demetrius Moorer who stole second and third and came in to score on a ground out by Zach Goldstein.

Chris Fornaci hit his second home run in as many days – a towering three-run homer that scored Akins Sr. and Ryan Rodriguez – to give the Admirals a 12-4 lead. It was Fornaci’s eighth home run of the season and it knocked San Rafael reliever Michael Holback from the game.

Grayson Weber needed just four pitches to dispose of the Pacifics in the eighth inning on three infield pop-outs.

For the second night in a row, Admirals manager PJ Phillips had an at-bat, and after making an out last night, singled down the right field line in the ninth.

With Weber on the mound in the ninth, Rizzitello doubled to deep center for the Pacifics. Brent Adheen took over for Weber and Moorer singled to center with Rizzitello scoring after Pugh was charged with an error. Nick DeBarr struck out swinging and Adheen got Goldstein to fly out to deep center. Adheen struck out Lindsay for the final out of the ninth.

The Admirals and Stompers will play for the 2017 Pacific Association championship with Dave Grant and Tim Fitzgerald calling the action, starting with the Team Superstores Pregame Show at 6:45 p.m. PT on 89.5 FM KZCT Ozcat Radio in Vallejo. The championship is a winner-take-all, single game that begins at 7 p.m. PT from Peoples Home Equity Ballpark in Sonoma.

NOTES: Pugh extended his on-base streak to a career-best 33 games after a walk in the fourth … Blanke collected three more hits and now had a pair of three-hit games in the series sweep of San Rafael … Pugh and Akins Sr. each scored three times on Thursday … Derke finished 3-for-4 with a double and two singles … Sonoma won both halves last season and captured the 2016 Pacific Association championship with a 47-31 overall record.