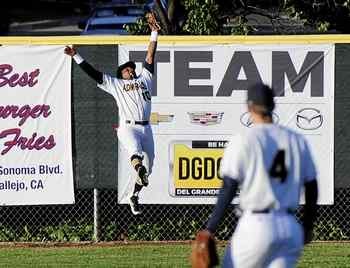 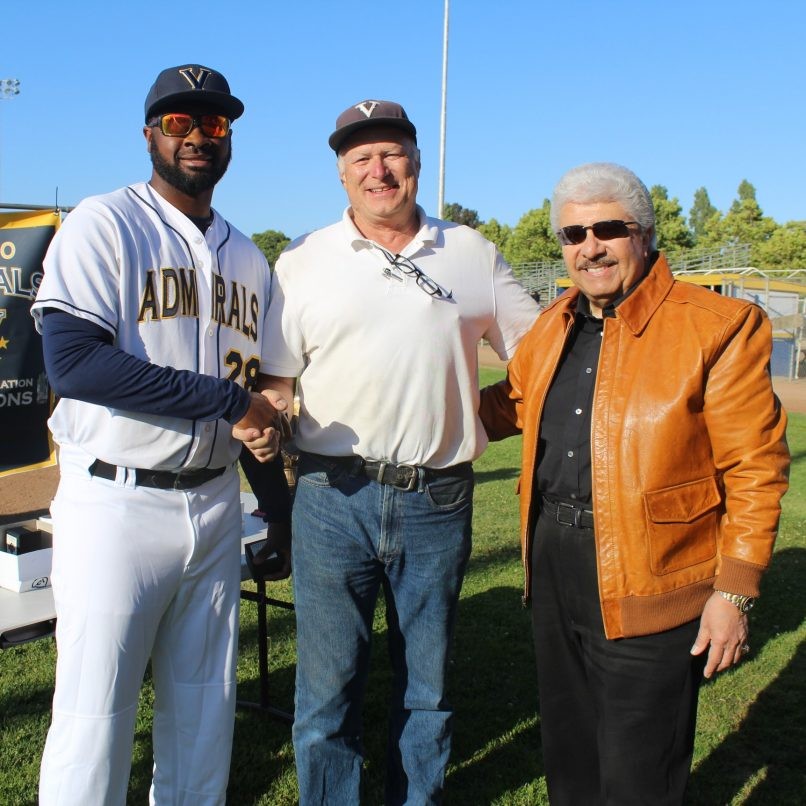 It was Game 1 of the NBA Finals between the Warriors and Cavaliers on Thursday but the Vallejo Admirals had their minds on another kind of ring.

One of those returning players to receive that bling was first baseman Graylin Derke, who was 4-for-4 with three runs scored and two RBIs. It was part of a 13-hit attack by Vallejo.

“I’ve never had a ring before,” Derke said. “I’ve won some championships but they really didn’t mean as much as the first pro one. It’s pretty awesome.”

His first reaction to seeing the custom-made ring with a large “V” in the center?

“Pretty shiny. A few guys were peeking early and they had to put their sunglasses on,” Derke quipped.

The 2018 Admirals squad features 10 returning players who were part of a team that went 24-15 in the second half and then edged the Sonoma Stompers 11-8 in the league championship game.

That actually did not include starting pitcher Martin Cronin, who worked five effective innings, striking out five and allowing one unearned run while scattering five hits and one walk.

Cronin last played for the Stompers in 2016 but elected to take last season off.

The right-hander said he had never started an opening day before but was excited when manager P.J. Phillips told him on Tuesday. Cronin allowed six base runners in the first two innings but settled down and retired seven in a row at one point.

“I came out here and emotions were high and I had some jitters going,” said Cronin, who lives in Texas but was born in Petaluma. “I just told myself to settle down and then I kind of got into a groove.”

The Admirals led for good after two in the bottom of the first. After Diamonds starter Corey Macdonald walked Rian Kiniry and J.J. Wagner misplayed David Kiriakos’ ground ball, the Admirals got a sacrifice fly from Tillman Pugh and an RBI single from Nick Akins to grab the lead right back.

Akins, who will double as the hitting coach again, was 3-for-5 and knocked in two runs and Pugh, the defending league MVP, reached base three times.

The game stayed that way until the fourth when Derke singled and Macdonald hit dAundray Van Slyke with a pitch. Vladimir Gomez bunted but Macdonald threw to second, which was vacated as the ball sailed into center field and Derke scored. Cyle Figueroa added an RBI groundout and Chris Fornaci hit a sac fly to make it 5-1.

The Admirals broke it open with four more in the fifth to lead 9-1. Kiriakos started the rally with a long home run to left and Vallejo chased Macdonald after a walk to Pugh and a single to Akins. It got worse for Pittsburg as Derke greeted Ridge Ackerman with an RBI single, Van Slyke had a run-scoring double and Gomez added a ground ball to score the ninth run.

Pittsburg made it 9-3 in the sixth but the Admirals sent 11 batters to the plate and scored six more in the bottom half of the inning to lead 15-3. Kiriakos had a booming, one-out triple to start the rally, Figueroa knocked in two with a single to right-center and Derke ripped his fourth hit of the game in the inning.

Derke acknowledged he was seeing the ball well.

“I’m kind of lucky living in Washington up by Seattle,” he said. “I get to hit off live guys at this place called Driveline. There weren’t any of their guys today that threw but one of (Pittsburg’s) other starters throws there. The best guys go over there to throw so I’m able to see some live arms and be a little ahead of the curve. As far as the rest of the team, we came ready to play today. I think we took spring training seriously. We took the offseason seriously.”

Notes: Even though it was Game 1 of the NBA Finals, the Admirals featured a healthy crowd for the opener. … Rings were given to the returning players along with coaches and staff. Former owner Buck Kamphausen, a local business man who helped save the team from going bankrupt during the inaugural season, was given a ring as well. … Pitcher Marquis Hutchinson, who is not on this year’s roster, was in attendance to receive his ring. … While Pittsburg threw the ball around, Vallejo made a handful of nice plays, including a leaping catch by Gomez in right field in the third inning as he robbed Jordan Van Atta of extra bases. … The Admirals improved to 5-1 in season openers. … Vallejo pitchers combined to strike out nine but walked 12 batters.