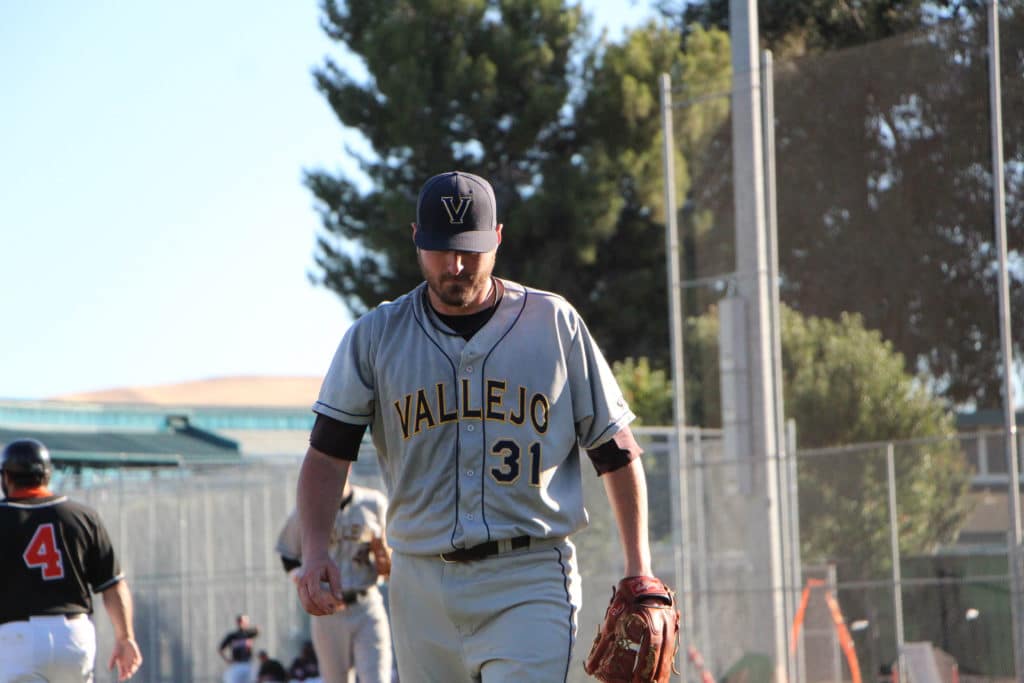 PITTSBURG, Calif. – The Admirals fell behind 12-2 after four innings, battled back to within 12-9, but were unable to recover, falling 14-10 to the Diamonds at Winter Chevrolet Stadium. After Pittsburg used a six-run fourth inning to take control, the Admirals scored six times in the fifth to cut the lead, 12-8. Pittsburg tallied two more runs in the seventh to pull away and win for the 11th time in 16 meetings this season against the Admirals.

Pittsburg improved to 3-4 during the second half of Pacific Association play and 24-22 overall, while Vallejo slipped to 13-33 overall and 1-6. For the first time this season, the Admirals lost six consecutive games after being swept by San Rafael last weekend and losing the final two games of the series versus Pittsburg at Wilson Park.

Pittsburg opened the scoring on Tuesday with a two-run first inning after an RBI double by Vinny Guglietti and a run-scoring single from Wes Wallace. A solo home run by Gerald Bautista gave the Diamonds a 3-0 lead through three innings.

Pittsburg added to their lead in the fourth with three runs after a bases loaded walk to Javier Marticorona forced in B.J. Guinn and an RBI groundout plated Wallace.

Vallejo scored twice in the fourth inning after David Kiriakos and Tillman Pugh cut the Pittsburg lead to 6-2.

Pittsburg extended the lead in the fourth after a six-run, eight-hit frame that saw David Dinelli allow eight consecutive hits including a three-run home run by Calderon and a two-run double by Jose Garcia.

Down 12-2, the Admirals used a six-run inning of their own in the fifth highlighted by a run scoring single from Chevy Clarke and a three-run home run by Shawn Payne.

Vallejo added a single run in the seventh after an RBI single from Mike Blanke brought in Clarke to get the Admirals within 12-9. Vallejo left the bases loaded after Quintin Rohrbaugh grounded to third to force out Blanke.

Admirals starter David Dinelli suffered the loss and had his shortest outing since July 7 after allowing 14 hits and 12 runs, while striking out one and walking one. Dinelli fell to 1-4 this season.

Pittsburg starter Michael Gunn didn’t fare much better, but was the recipient of a large early lead, going five innings and allowing eight hits and eight runs with two strikeouts and one walk. Gunn improved to 3-1 after the Pittsburg offense gave him plenty of runs to work with.

Vallejo reliever Eli Garcia struck out the side in the fifth inning and hit a batter in the sixth before being tagged for two runs in the seventh after a wild pitch scored Jose Garcia and a single by Guinn plated Ordomar Valdez.

Demetrius Banks relieved Garcia with no outs in the seventh and navigated through the three hitters he faced – including a pair of strikeouts – to put an end to the Diamonds rally.

A two-out double by Kiriakos in the eighth brought in Clarke from second base to trim the Pittsburg advantage to 14-10.

Banks struck out four of the six Diamonds hitters that he faced, including three in a row from the seventh into the eighth.

In the ninth, the Admirals went quietly against Pittsburg reliever Skylar Shaw-Fuss after Blanke and Payne struck out swinging and Chris Fornaci drew a two-out walk. Rohrbaugh struck out looking as Vallejo stranded Fornaci at first.

The Admirals and Diamonds will play the second game of the series at 6:30 p.m. PT Wednesday from Winter Chevrolet Stadium in Pittsburg. Mahlik Jones (1-1, 2.18) is scheduled to make his first professional start for the Admirals and will be opposed by Pittsburg right-hander Tyler Stirewalt (5-3, 3.15).

The pregame show presented by Team Superstores begins at 6:15 p.m. with Dave Grant and Tim Fitzgerald on the Admirals Baseball Network. Be sure to follow the Admirals on social media including Twitter (@VallejoAdmirals).

NOTES: The Diamonds are now 10-3 at Winter Chevrolet Stadium versus Vallejo this season … the 24 combined runs by the Admirals and Diamonds is the most since the two combined to score 29 (15-14 Diamonds) on Sunday, June 25 … Vallejo has been outscored 108-72 by Pittsburg … Fornaci extended his on-base streak to nine games after he was hit by his 14th pitch of the season in the second inning … Kiriakos two hits gives him six multi-hit games through his first 18 games this season … Pugh moved into sole possession of the Admirals stolen base lead (17) after he stole second in the fifth.