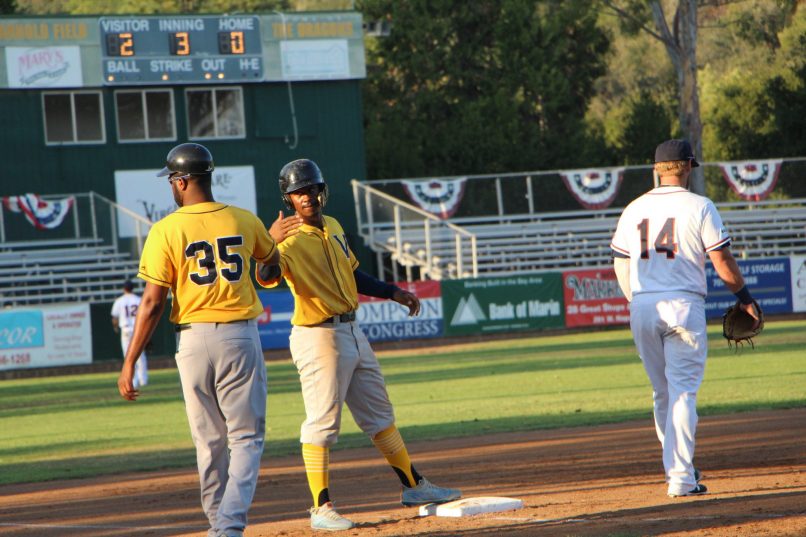 SONOMA, Calif. – With sole possession of first place in the second half of Pacific Association play up for grabs, the Admirals went down early and tied the game in the seventh only to have Sonoma score the game-winning run on a wild pitch strikeout as Vallejo fell, 4-3 on Sunday night at Peoples Home Equity Ballpark at Arnold Field. Sonoma (46-23 overall) now has a one-game lead in the second half at 18-12 with nine games left in the regular season, while Vallejo (29-40) slips to 17-13.

Sonoma grabbed an early lead after Daniel Baptista scored on an error by Admirals shortstop David Kiriakos and Yuki Yasuda scored on a single from Derrick Fox. The Stompers added to their lead in the third after a two out, two-run single from Brennan Metzger that plated both Scott David and Baptista.

Vallejo answered back in the fourth after Tillman Pugh (pictured above) smacked his team-high tying 14th home run of the season to lead off the inning and Shawn Payne hit his fifth of the season two batters later to bring the Admirals to within 4-2.

Alex Fishberg took over for Reyes in the fifth and struck out five hitters in his two scoreless innings of relief.

In the seventh, Quintin Rohrbaugh walked to lead off the inning and Chevy Clarke doubled to right-center. Kiriakos lined out to second but Pugh reached on an error by Sonoma third baseman David that scored Rohrbaugh from third. With two outs, Payne walked to load the bases and Vallejo native and UC Davis graduate Ignacio Diaz pinch-hit for Mike Blanke. Diaz drew a bases loaded walk to bring home Clarke and tied the game at four.

Zach Wendorf took over for Logan Gillaspie and facing Graylin Derke with the bases loaded in the seventh, got Derke to ground out to first and strand the bases loaded. Vallejo left nine runners on base through the first seven innings.

Holmes took over for Fishberg in the seventh for Vallejo and stranded a pair of runners after getting Isaac Wenrich to fly out to center.

With one out in the eighth, Rohrbaugh was hit by a pitch and Clarke drew a four-pitch walk. Kiriakos grounded to third and David forced out Rohrbaugh at third and threw wildly to first, which enabled Kiriakos to reach but was thrown out trying to take second after first baseman Daniel Baptista recovered the wild throw and threw him out at second.

After Holmes walked Fox, Marcus Bradley and Matt Hibbert with one out in the eighth, Andin Diaz took over for Holmes and got David to strike out swinging but a wild pitch scored Fox from third to give Sonoma a 4-3 lead.

Pugh hit his second home run of the game – which gave him the Admirals single season home run record of 15 – to bring the Admirals to within 6-5. Akins, Sr. singled to right-center and Vladimir Gomez, facing Sonoma closer Cox, struck out swinging. Diaz grounded into a double-play to end the game.

Vallejo opens its final home stand of the season when welcoming Pittsburg to Wilson Park at 6:35 p.m. PT Tuesday. The Team Superstores Pregame Show begins at 6:20 p.m. on the Admirals Baseball Network with Dave Grant calling the play-by-play.

NOTES: Pugh’s home run in the fourth give him a season long 24-game on-base streak and has now hit safely in 20 consecutive games … Rohrbaugh has now reached base safely in 16 straight games after his leadoff walk in the seventh … with a single in the second, Nick Akins, Sr. has hit safely in 11 games in a row and reached base in 15 straight … Clarke’s double in the seventh gave him a nine game hit streak … Fishberg now has 37 strikeouts in 15.2 innings this season and has 14 over his past 5.2 innings of relief.