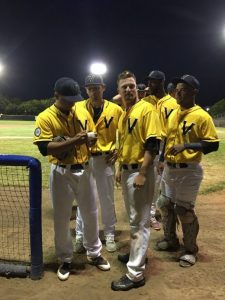 On the night the Golden State Warriors defended their NBA title successfully, the Vallejo Admirals also showed they have the potential to win back-to-back crowns.

The defending Pacific Association champs defeated the San Rafael Pacifics 9-4 at Wilson Park and with the victory, moved into first place by themselves as the Admirals’ record stands at 6-2 after eight games. The Sonoma Stompers and San Rafael are both a game back in second place with 5-3 records.

To get the Friday night win, Vallejo bounced back on offense to collect 10 hits and nine runs a night after it was shut out. The Admirals also had solid pitching after the third inning as well as stellar defense.

For Admirals leadoff batter Rian Kiniry the game was just another walk in the park.

Vallejo’s second baseman took a stroll to first base twice due to bases on balls and then twice more took a jog around all the bases with solo home runs in the second and seventh innings. The homers were his team-leading fourth and fifth of the year.

“I’m just seeing the ball really well and putting a good swing on pitches I can hit,” Kiniry said. “We’re doing a good job of playing hard, having fun and enjoying the game.”

Despite the win, it was the Pacifics who got on the scoreboard in the first inning off Vallejo starter Dalton Bernardi when Brent Gillespie drove home Rando Moreno on a single that dropped just inside the left-field foul line to make it 1-0. After a double by Javion Randle, two more runs scored on a single by Michael Staudinger to make it 3-0 and San Rafael seemed in complete control.

The lead didn’t last long, however, as the Admirals scored three runs of their own in the bottom half of the frame off Pacifics starter Fernando Baez. Thanks to a Kiniry walk, a David Kiriakos single and Tillman Pugh getting hit by the pitch, the Admirals loaded the bases with nobody out. Nick Akins Sr. hit a sacrifice fly to left to make it 3-1, and then dAundray Van Slyke tied the game 3-3 with a single to left.

San Rafael took the lead back in the top of the second when Jake Taylor had a sacrifice fly to left to score Zach Files, but the pendulum swung back in Vallejo’s favor in the bottom half of the fame on Kiniry’s first homer. The drive was such a no-doubt shot that Pacifics’ right fielder Randle was as still as a statue as the ball flew over him and left the yard.

“That was a 12-pitch at bat and I fouled off a lot of pitches,” Kiniry said. “I battled back from being down 0-2 to working a full count. I knew he was going to throw something in the zone because he didn’t want to walk me and I put a good swing on it.”

The Admirals took a 6-4 lead in the bottom of the third when Cyle Figueroa and Chris Fornaci each had two-out RBI singles. The two runs chased Baez from the game.

The Admirals scored another two runs in the fifth on an RBI single by Figueroa and a hit by pitch on Kiriakos with the bases loaded to make it 8-4. Figueroa, the catcher, finished with three hits.

“I just knew I had to stay in my approach. I let all these other guys (nods back to locker room) hit the home runs,” Figueroa said with a laugh. “I just stay with my little singles like I always do.”

Bernardi left the game after five innings having given up two earned runs on four hits while walking four. In fact, Vallejo pitchers settled down completely after the third inning as Bernardi along with relievers Brett Schneider, Jalen Miller and Luis Ramirez only allowed one hit from the fourth through the ninth.

“I thought all the pitchers threw well tonight,” Figueroa said. “Bernardi had a little bit of nerves early on because it was his first home start, but once he settled down he was going good. Schneider then came in and pitched well, and Miller came in and also pitched well. Then Ramirez did a good job finishing the game.”

The Admirals added to their lead in the bottom of the seventh when Kiniry added his second solo home run of the game to make it 9-4. His second homer was more to the gap in right-center field and cleared the fence by a few feet.

Vallejo travels to Martinez Saturday and Sunday for a two-game series against the Clippers.

“We’ve just got to keep doing the same thing we’re doing now,” Figueroa said. “We’ve got a good mix of old guys and new guys and the old guys are telling the new ones how to win a championship. We’ve got to keep grinding though, because we’re far, far away from the finish line.”