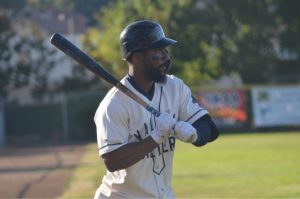 From the Vallejo Times-Herald

Akins launched his league leading 17th and 18th homers and he now leads the circuit in RBIs with 42. Tillman Pugh also hit two homers, his third and fourth, and Ryan Kiniry hit his 12th homer.

Benicia High grad Peter Reyes (3-1) picked up the win in relief as he went 1 2/3 innings, allowing one hit and no runs. Brett Schneider earned his second save with 1 1/3 innings of relief. He did not allow a hit or run. Luis Ramirez started the game and went 4 1/3 innings, allowing three hits and four runs. He walked six.

Brennan Fisher was tagged with the loss for Napa (14-20).

Vallejo (20-14) scored three in the first inning as Akins knocked in Pugh and a Chevy Clarke double drove in Kiniry and Akins.

The Admirals scored five more in the second to make it 8-4 as Pugh had a two-run blast and Kiniry and Akins also homered in the inning. Akins hit another homer, a solo shot, in the eighth.

Akins was 3-for-4 and drove in three. He is now tied with Pugh for the single-season Admirals’ record for home runs.

Nick Kern was 2-for-3 and homered for the Silverados.

Vallejo is at Martinez on Tuesday to start a two-game series at Joe DiMaggio Field.