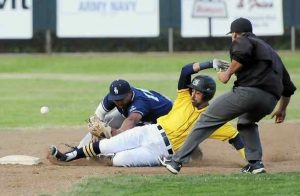 After losing a six-run lead the Vallejo Admirals needed some clutch hits late in a game against the San Rafael Pacifics if they wanted to pull out a much-need win at Wilson Park.

They got them, just in the “Nick” of time.

Trailing 9-8 after losing an 8-2 lead in the top of the eighth, the Admirals got a solo home run from Nick Akins Sr. to tie the game at 9-9 leading off the bottom of the frame. Moments later Vallejo newcomer and catcher Nick Crouse drove in Vladimir Gomez with the eventual winning run with an RBI single up the middle that gave Vallejo a 10-9 victory.

The win ended San Rafael’s 13-game winning streak and kept its magic number to clinching the first half of the Pacific Association first-half title at four.

The game-winning hit for Crouse was his first hit of the year with Vallejo and deflected off relief pitcher Chris Mazza’s glove before Rando Moreno dove for it in shallow center field.

“I was watching the pitcher (Mazza) throw to the guy before me and I noticed he was throwing a lot of cutters and some sinkers, so I was trying to look for a ball up a little bit,” Crouse said. “I knew I had to get to first base quick. I thought when I hit it that it was going to get up the middle and thankfully it did and it all worked out.”

Despite losing a late lead in the top of the eighth, Vallejo manager P.J. Phillips said the team did not get down on itself when it headed back to the dugout to begin the bottom of the eighth.

“We have a lot of veteran guys on the team, so we don’t get down,” Phillips said. “I think we have one of the best hitting teams in the league, so there was no worries from us in that spot.”

Early in the contest the Admirals had complete control. They took a 1-0 lead in the bottom of the second when David Kiriakos doubled just inside the left field line and then scored on a Brandon Fisher sacrifice fly to right.

Vallejo added two more runs in the bottom of the third. Fischer took a walk to force home Akins, who had walked earlier in the inning. The Admirals continued to make Pacifics’ starter Jared Koenig work as Vallejo newcomer Crouse walked a few moments later to force home Kiriakos, who singled earlier in the frame.

Vallejo starter Frank Valentino seemed to get in a groove after the first inning, as he retired seven batters in a row at one point.

Valentino would get a no-decision but he gave up eight hits and two earned runs while striking out six. The Pacifics finally got to Valentino to close the gap to 3-1 in the top of the fourth when Zach Files had an RBI sacrifice fly to right to drive home Javion Randle, who had led off the inning with a walk.

Vallejo struck right back, however, adding four runs in the fourth. With one out Akins had a broken bat RBI double to right to drive home Tillman Pugh, who later in the game was hurt trying to catch a fly ball in center and had to be carted off the field. He had a hit and two walks.

The Admirals were doing a good job taking pitches, but Kiriakos saw something he liked on the first pitch to him from Koenig as he drove it over the left field fence for a two-run homer that made it 6-1. Not only did Kiriakos drive the pitch over the wall for his third hit of the game, but the hit sent Koenig out of the game.

“I was just trying to be aggressive,” Kiriakos said. “We had runners in scoring position and my job is to get them in and I got a good pitch to hit and it went out. I was looking for a fastball up and in and that’s what I got. The last time I faced him he busted me in on all of my at bat’s so I was waiting for it today.”

Brandon Warner replaced Koenig, but Chevy Clarke didn’t seem to mind the change as he drove Warner’s first pitch over the fence in left for a solo homer and 7-1 lead.

In fact all the rust came off the Chevy on Friday as in the bottom half of the inning Clarke hit his second home run of the game, this one another solo shot but to center field to make it 8-2. The two homers were Clarke’s first two hits since rejoining the team on Thursday.

The Pacifics wouldn’t go away, however, as they scored a run in the eighth on an RBI single by Mark Lindsay to cut the gap to 8-3. The gap was closed even more a few moments later when Corey Dempster hit a three-run homer to left field off reliever Eli Garcia that made the score 8-6.

Garcia left the game, but the Pacifics continued to make some noise off reliever Alex Fishburg as Brent Gillespie hit a 3-run homer to right to give San Rafael its first lead at 9-8.

After Akins homered for the 16th time this season to tie the game at 9-9, Gomez reached on a throwing error by Files with two outs. Files had previously made two stunning plays at third in the seventh to prevent Vallejo from scoring more, but his throwing error on a high chopper went down the right field line in the eighth. After Fischer was hit by a pitch, Crouse singled home Gomez with the go-ahead run. Gomez had three hits on the night.