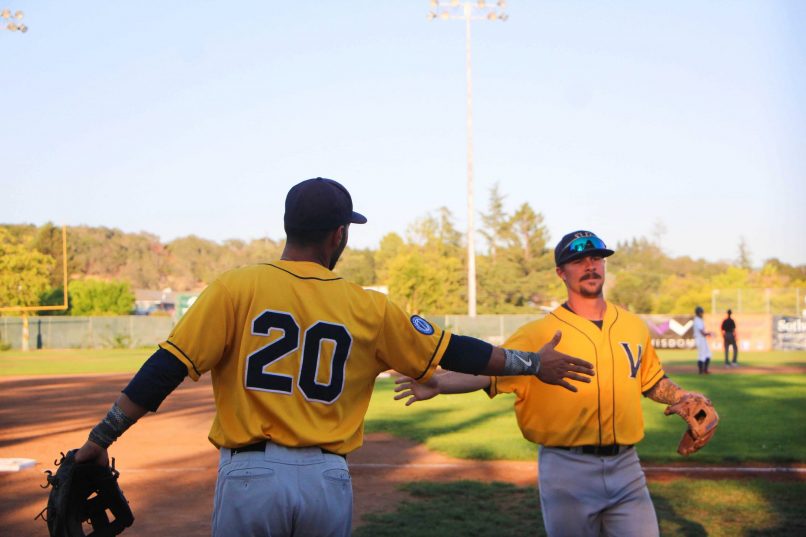 SONOMA, Calif. – The Admirals scored early for the second consecutive night and got two-run home runs from Mike Blanke and Quintin Rohrbaugh and won 7-2 on Wednesday night over the Stompers at Peoples Home Equity Ballpark. Vallejo captured their second series in a row over the Stompers after winning last night’s opener, 4-1.

With the victory, Vallejo moved to within one game of the Stompers in the second half of Pacific Association play, improving to 11-9 and 23-36 overall. Sonoma slipped to 12-8 and 40-19 overall.

Admirals reliever Demetrius Banks (3-2) worked two innings and allowed one earned run with four strikeouts to collect his third win of the season.

The Admirals grabbed the early momentum after Tillman Pugh walked with two outs in the first, Mike Blanke delivered a two-run home run to left that gave Vallejo a 2-0 lead.

Derrick Fox hit a solo home run in the third off Reyes to trim the Admirals advantage to 2-1.

Vallejo answered back with a three-run fifth inning after Chris Fornaci led off with a solo home run to left-center.  The Admirals pushed across two more runs – both unearned – after Sonoma starter Scott Plaza threw wide of the bag at first, scoring Quintin Rohrbaugh (pictured at right) from second. Chevy Clarke came in to score on a single from Tillman Pugh to give Vallejo a 5-1 lead.

In the sixth, Sonoma collected three hits off Admirals reliever Demetrius Banks – Yuki Yasuda led off with a single and scored on a misplayed line drive from right-fielder Vladimir Gomez after Isaac Wenrich singled.

Sonoma left five runners on base in the fourth and fifth innings combined, including the bases loaded in the fourth.

In the seventh, the Stompers got consecutive singles from Marcus Bradley and Brennan Metzger to open the frame, but reliever Alex Fishberg got Daniel Baptista, Yuki Yasuda and Scott David to strike out swinging to end the threat.

The duo of Banks and Fishberg out of the Admirals bullpen struck out seven in three relief innings. Tim Holmes took over for Fishberg in the eighth and induced a fly-out, soft lineout and struck out Eddie Mora-Loera.

Rohrbaugh collected his first professional home run with one out in the ninth to plate Graylin Derke, who had walked to open the inning. With the Admirals leading 7-2, Clarke and David Kiriakos singled off Sonoma reliever Mike Jackson, Jr., but Blanke struck out looking to end the frame.

In the bottom of the ninth, Brent Adheen gave up a leadoff double to Matt Hibbert and a single to Marcus Bradley that pushed Hibbert to third. Metzger reached on a fielder’s choice to third, scoring Hibbert. Yasuda grounded out to shortstop to end the game and secure the Admrials’ series victory.

Vallejo and Sonoma will contest the third and final game of the series at 6 p.m. PT Thursday from Peoples Home Equity Ballpark at Arnold Field in Sonoma. The Team Superstores Pregame Show begins at 5:45 p.m. with Dave Grant and Tim Fitzgerald on the Admirals Baseball Network.

NOTES: Pugh reached base for the 15th consecutive game with a walk in the first inning and extended his hit streak to 11 games after an RBI single in the fifth … Rohrbaugh has now hit safely in six straight after a double in the fifth … Vallejo has now won the last two series against Sonoma dating back to July 7-9 … Rohrbaugh is 9-for-his-last-18 overall dating back to last weekend’s series at Pittsburg … Fornaci hit his fifth home run of the season and has collected four hits in the series versus Sonoma.