Admirals get walkoff win in extra innings over San Rafael 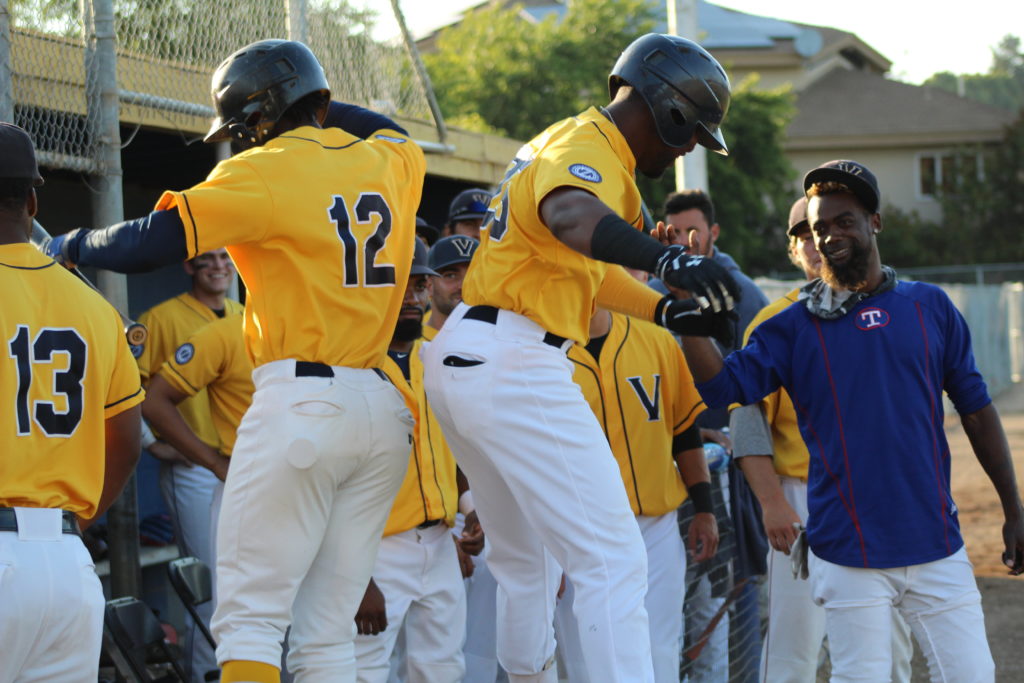 The Vallejo Admirals lost a late lead to the San Rafael Pacifics on Tuesday night, but if anyone had uttered to the Admirals dugout the possibility of a loss, they might have received a “Blanke” stare.

Michael Blanke, who had singled twice earlier in the contest, came up clutch in the 10th inning for Vallejo as his sacrifice fly was deep enough near the foul line in right field to send home Chevy Clarke with the winning run of a 4-3 victory.

The win, Vallejo’s second in a row, gave the Admirals the series against the San Rafael Pacifics and gave them their sixth win of the second half (18-35, 6-8), good enough to tie them for third place in the Pacific Association standings.

Blanke, who had popped the previous pitch from Ryan Harper just foul behind home plate, came through with two strikes on him.

“At that point I was looking for something up in the zone, something I could get in the air to the outfield,” Blanke said. “I hadn’t faced the pitcher before, so with two strikes I was just trying to put something in play. Chevy (Clarke) did a great job of tagging up at third on a ball that wasn’t in fair ground. Overall, we needed a good win like that. It definitely gives us momentum.”

The game was played with international tiebreaker rules starting in the 10th inning. This season the Admirals are 2-0 in those conditions, as they won 13-12 earlier this year in a crazy game at Pittsburg.

For seven innings, it didn’t look like their would be much drama against the Pacifics (23-30, 6-8) as Vallejo starter Marquis Hutchinson was in complete control. For the first seven innings he allowed just three hits and no runs.

“My change-up was really working well tonight,” Hutchinson said. “Basically every time I threw it was working.”

The Admirals gave Hutchinson a lead in the bottom of the third when Clarke collected his second single of the game and later scored after David Kiriakos doubled, Tillman Pugh walked and Blanke drove in a run with a single to left to make it 1-0. The Admirals made it 2-0 when Nick Akins walked with the bases loaded.

In the top of the eighth, however, San Rafael finally got to Hutchinson. Demetrius Moorer reached on an infield single and then Jake Taylor deposited the first pitch to him over the fence in left/center for a home run to tie the game at 2-2. Hutchinson left the game and Demetrius Banks came on in relief. After the game Hutchinson talked about the pitch that was basically his only mistake of the game.

“He (Taylor) kept his balance, I missed with a fastball and he made a great adjustment,” the Admirals starter said.

Banks didn’t allow a run in the eighth or ninth innings. He got some help from his defense in the eighth as Rohrbaugh made a spectacular diving catch on a line drive nearly over his head to keep the game tied at 2-2.

“Man, that was a great play,” Hutchinson said with a big grin. “It’s a good thing to know players are willing to put their body on the line like that when we need it.”

The Admirals had a chance to take the lead in the bottom of the eighth as Akins hit a towering drive to right field with two outs, but Miles Williams made a leaping catch at the wall to keep the game tied at 2-2.

While Hutchinson pitched well for Vallejo, James McReynolds was just as solid in his starting effort for San Rafael. He allowed just the two runs in the third inning and only eight hits for the game.

Garrett Granitz pitched a scoreless ninth for San Rafael and the game went into extra innings.

In the top of the 10th Taylor came through again, this time with a bases-loaded walk that plated Williams. Taylor finished with all three RBIs for San Rafael.

Down but not out, Vallejo came back in the bottom of the frame. With Fornaci on second and Rohrbaugh on first with nobody out, Clarke decided to try and bunt and move the runners over, despite having three hits in the game and lining out to third in his fourth at bat. Despite the failed bunt attempt, Clarke didn’t mind following manager P.J. Phillips’ orders to square around rather than swing away.

“That call came from the coach, but getting that run was crucial and I’ll do anything the team needs me to do,” Clarke said.

With runners on first and second and one out, Vallejo caught a break when Harper threw a wild pitch to move runners over to second and third. David Kiriakos then hit a chopper to third that scored Rohrbaugh with the tying run to make it 3-3. With runners on second and third and one out after a Pacifics’ error, San Rafael decided to walk Pugh, who had two hits in the game, to load the bases. Moments later, Blanke brought home Clarke with the winning run as Williams’ throw from right field wasn’t in time.

“A win like this helps brings us closer together,” Hutchinson said. “We’re at the point where we just move on from this one and look to win the next game.”

Clarke also admitted the team has more confidence in the second half of the season and it’s rubbing off on the whole team.

“We have a lot of confidence now to the point where we come to the park now expecting to win rather than hoping to win,” Clarke said.

Notes … Fornaci was hit by the pitch for the 19th time, a new Pacific Association single season record … Vallejo is now 15-3 this season when holding a lead after the seventh inning.