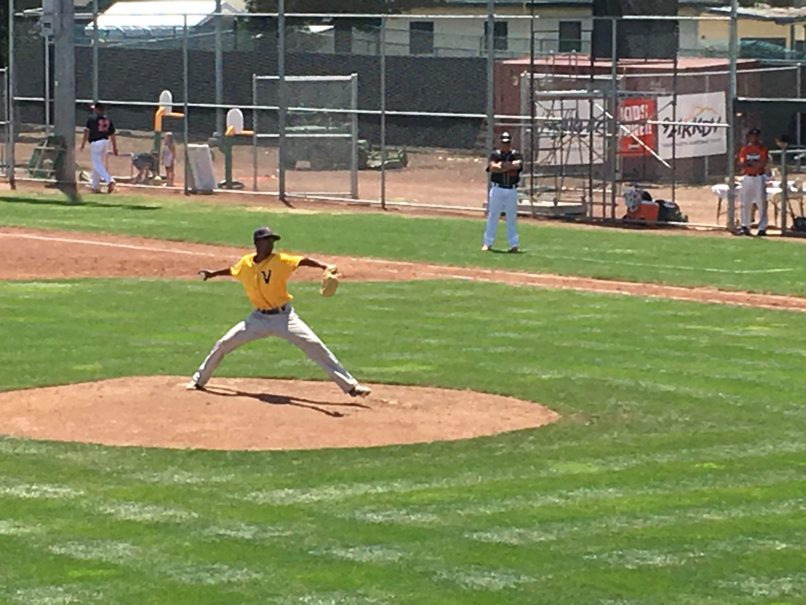 PITTSBURG, Calif. – The Admirals carried momentum over from last night’s victory by taking a 7-0 lead through two innings during a 10-4 win over the Diamonds at Winter Chevrolet Stadium. Vallejo took a series from Pittsburg for the first time this season in winning its second consecutive game and improving to 15-33 overall and 3-6 in the second half of Pacific Association play. Pittsburg slips to 24-24 overall and 3-6.

Admirals starter Marquis Hutchinson (pictured) worked into the eighth inning, striking out three and allowing eight hits to collect his fourth win of the season.

Chevy Clarke led off the game with a solo home run to left field to get the scoring started for the Admirals. After Tillman Pugh reached on a fielder’s choice, Mike Blanke drove him home with a double to give the Admirals a 2-0 lead.

In the second, the Admirals sent 10 batters to the plate and knocked Pittsburg starter Dennis Neal from the game after he allowed seven runs (six earned) on seven hits. Clarke, David Kiriakos, Pugh, Chris Fornaci and Quintin Rohrbaugh all scored for the Admirals in the second, providing Vallejo a 7-0 advantage. Neal suffered the loss and fell to 2-4 this season.

Pittsburg third baseman B.J. Guinn smacked his second home run of the season in the fourth inning and drove in Ordomar Valdez with a two-run shot.

Leading 7-2, Vallejo added three runs in the sixth inning after a wild pitch from Pittsburg reliever Brett Solano scored Pugh and a two-run single from Vladimir Gomez brought in Blanke and Fornaci.

Pittsburg cut into the lead after consecutive singles from Alex McKeon and Jose Garcia to begin the eighth for the Diamonds, and McKeon was brought in after a fielder’s choice ground ball from Guinn. With the bases loaded in the eighth, Wes Wallace struck out and Yiecok Calderon walked to force in Jose Garcia. Brent Adheen took over for Hutchinson with the bases loaded and got Javier Marticorona to fly out.

In the ninth against Adheen, Pittsburg’s Gerald Bautista struck out, McKeon singled through the left side but Garcia struck out looking and Guinn popped out to third. The series win is the first for the Admirals since July 7-9 when Vallejo took two of three from Sonoma.

The Admirals welcome the Diamonds to Wilson Park at 6:35 p.m. Friday as the series shifts to Vallejo. Right-hander Peter Reyes (2-1, 3.49) is scheduled to start for the Admirals and righty Corey MacDonald (3-4, 2.82) is slated to go for the Diamonds.

The Team Superstores Pregame Show on the Admirals Baseball Network begins at 6:15 p.m. with Dave Grant. Be sure to follow the Admirals on social media, including Twitter (@VallejoAdmirals).

NOTES: Kiriakos continued his offensive surge with three more hits and went 10-for-13 in the series vs. Pittsburg and has now reached base in eight straight games … Pugh scored three more runs and now leads the team with 37 runs … Fornaci was hit by three pitches and has been hit by 17 through his first 29 games as an Admiral … Clarke’s home run in the first was his sixth of the season … Gomez drove in three more runs and is now just two away from tying Graylin Derke for the team-high with 34 RBI … Blanke has now hit safely in five straight games after a double in the first … with his single in the first, Payne has hit safely in five games and reached base in six consecutive … the Admirals improved to 7-11 this season versus Pittsburg.