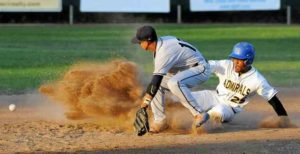 Tim Williams slides in hard at second base – Mike Jory

It’s late enough in the Pacific Association season where the idea of a league MVP should be considered.

If the Vallejo Admirals can stay within striking distance of first place, right fielder Tim Williams certainly is in the discussion.

Williams did just about everything on Tuesday against the Sonoma Stompers as the Admirals won the first game of the Pacific Association series at Wilson Park as they walked a tightrope for an 8-7 win.

Williams hit a three-run homer to turn a one-run game into a four-run cushion in the seventh, made a spectacular catch in the fourth and began the Admirals’ five-run rally with an infield single in the second.

“Him and Darian Sandford — those guys have been carrying our team for basically the whole year,” Admirals player-manager P.J. Phillips said. “Darian at the top of the lineup, he gets on and causes havoc on the bases and Tim just always comes up with the clutch hits. He’s been like that all year.”

With the win, the Admirals (28-39, 13-15) pulled within three games of first place in the second half standings with 11 games left in the regular season.

“I wouldn’t say that we feel too pressured but we know that now is the time to go,” third baseman Aaron Brill said. “We’re still within reach. We know we have the talent and we know we’re not that far back. We play the right teams. We play five more games against Sonoma. If we win every series, we’ll be right there.”

Brill had a monster hit against the Stompers with a bases-clearing double to tie the game 3-3 in the second inning.

“He’s just doing what he does — getting ahead of hitters, throwing strikes, pounding the zone,” Phillips said.

The Admirals led by four runs late and then by three in the ninth but the Stompers (39-28, 16-12) made it interesting against closer Josh Evans. They cut it to 8-7 on an RBI single by Derek Fox, but Evans got the dangerous Joel Carranza to fly out with runners at second and third for the final out. It was his fifth save.

Asked if Evans made him nervous, Phillips said. “No, Evans threw strikes but the elements made me nervous. We have a slick outfield and the wind. Stuff like that. You never know what can happen.”

The Stompers scored three runs in the first inning against Dinelli — all of those coming with two outs.

Matt Hibbert reached on an infield single to begin the inning and scored on Randy Santiesteban’s RBI single. Matt Hurley knocked in two more with a single up the box.

Vallejo, however, sent nine to the plate in the second inning as Williams reached first on an infield chopper. Williams beat a throw to second on Andrew Rubalcava’s ground ball and Lydell Moseby walked to load the bases.

Brill then crushed Pat Lemmo’s offering to deep left-center to clear the bases. Moseby was safe with the third run when the throw sailed over the head of catcher Mason Morioka. 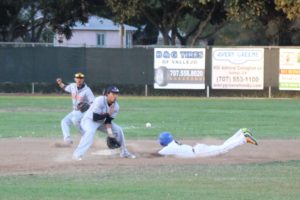 Sandford steals his 69th base of the season – Susan Noll

Brill scored the go-ahead run on Cyle Figueroa’s single to right field and the Admirals added one more when Figeroa scored on Morioka’s throwing error, as he tried to nail Sandford when the center fielder stole second.

Figueroa, the new starting catcher with the inured Wilfredo Petit heading back to Venezuela, had two hits and was on base four times.

The Stompers made it 5-4 in the top of the seventh, but the Admirals tacked on three more in the bottom half of the inning on Williams’ three-run blast to dead center against reliever Ryan Richardson. It was his seventh homer of the season.

Notes: Sandford had two more stolen bases, giving him 69 on the year. He is the Pacific Association’s single-season champ as he surpassed ex-Admiral Tillman Pugh, who previously held the record with 43. … Wednesday’s game will be “Back to School Day” as Vallejo Together and sponsors are encouraging fans to drop off clothing and school supplies at the game. In return, fans will receive sponsorship tickets. … Students who wear their school’s attire get into the game free and teachers who show their school ID will be admitted free as well.