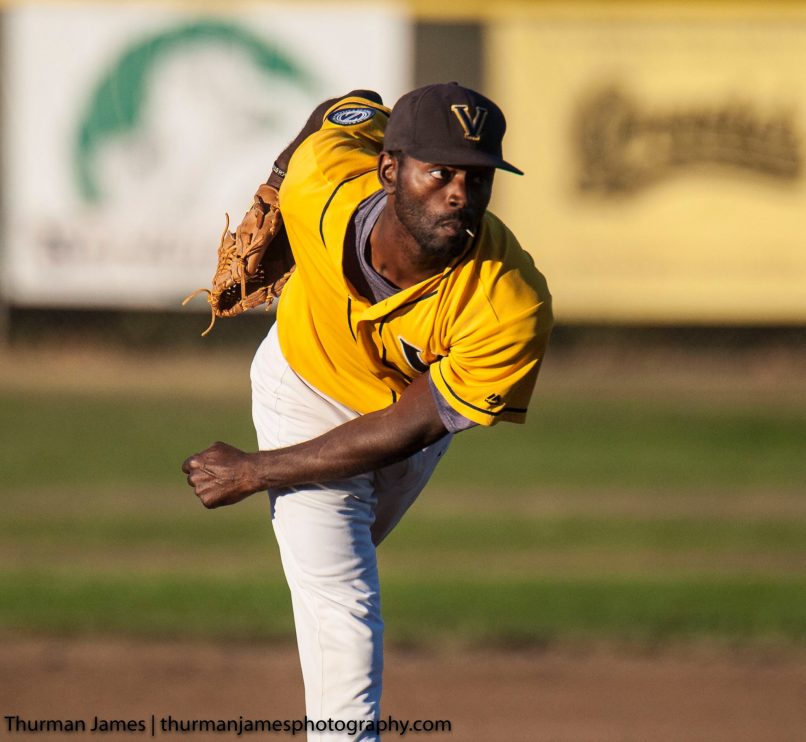 SAN RAFAEL, Calif. – The Admirals used a four-run third inning and an efficient outing from starter Demetrius Banks to win the series opener, 9-3 over San Rafael on Tuesday night at Albert Park. Tillman Pugh hit his career-best 18th home run of the season to back Banks (pictured), who worked 5.1 innings and allowed only one run on two hits with three strikeouts.

The Admirals claimed an early lead after a two-out double from Nick Akins Sr. brought in David Kiriakos who singled. San Rafael got a solo home run from Cameron Monger that tied the game in the first.

Vallejo collected their second lead of the game in the second inning after Mike Blanke led off with a single and Graylin Derke walked. Chris Fornaci laid down a sacrifice bunt down the third base line in which Zach Goldstein threw away down the line at first, scoring Blanke. Quintin Rohrbaugh singled home Derke, who reached third on the error by Goldstein. Fornaci and Rohrbaugh scored to give the Admirals a 5-1 lead as Chevy Clarke drove in a run with a groundout.

The Admirals extended their lead in the fourth, sending nine hitters to the plate in a three-run inning capped off by Tillman Pugh’s home run which scored Kiriakos and Rohrbaugh and provided Vallejo an 8-1 advantage.

After Admirals starter Banks exited with one out in the sixth, reliever Christopher De Leon walked in a run after allowing a single to Demetrius Moorer, hitting Mark Lindsay and walking Jake Taylor. The walk to Ricky Gingras trimmed the Admirals lead to 8-2.

A solo home run from Miles Williams in the seventh got the Pacifics to within 8-3, but De Leon struck out three in the inning to escape more trouble.

Vallejo was retired quickly in both the seventh and eighth innings against San Rafael reliever Julian Esquibel. In the eighth, De Leon got a strikeout and fly-out before departing due to an arm injury. Grayson Weber relieved De Leon and got Gingras to ground out to second.

In the ninth, San Rafael made two defensive substitutions, including tomorrow’s starter Max Beatty to catcher and starting pitcher Nick DeBarr to right field. Shawn Payne drew a leadoff walk and with Vladimir Gomez pinch-running, went to second and third on passed balls by Beatty. Gomez scored on a single from Blanke to extend the Admirals lead, 9-3.

Weber put away the Pacifics in order in the ninth as Vallejo won for just the second time in seven tries this season at Albert Park.

The second game of the series between Vallejo and San Rafael is scheduled for 7:05 p.m. PT Tuesday at Albert Park in San Rafael, with David Dinelli (2-6, 7.17) the probable starter for Vallejo and Max Beatty (5-2, 3.23) for the Pacifics. The Team Superstores Pregame Show begins at 6:45 p.m. with Dave Grant and Tim Fitzgerald on 89.5 FM KZCT Ozcat Radio in Vallejo.