Admirals Kick Off Week with Victory at Martinez 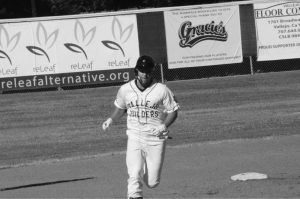 Middle of the season switches in field managers can sometimes spark a team.

Just two seasons ago, the Vallejo Admirals made just that kind of change and although they still finished in last place that year, it set the ground work for an eventual Pacific Association championship in 2017.

The Martinez Clippers made a switch in the dugout on Tuesday with Dan Parker taking over the new job. For nine innings, the cellar dwellers looked like they could play at the level of the defending league champs.

After allowing a leadoff double in the ninth, the right-hander retired the final three batters to close out a tight 8-7 win at Joe DiMaggio Field. The Admirals own an 8-0 record against Martinez.

In fact, Vallejo’s bullpen was the star in this one. After starting pitcher Jalen Miller departed the game with a score tied 7-all in the fourth, three Admirals relievers (Eli Garcia, Peter Reyes and Schneider) blanked the Diamonds over the final 5 1/3 innings.

“They’re starting to get comfortable,” Admirals manager P.J. Phillips said. “We’re through 30-something games. Schneider has been doing well for us all year and it ends with him so it was a good game overall.”

Schneider, who owns a 1.17 ERA and three saves, said this is the first time in his career he has been a closer. He said he still felt confident despite allowing a leadoff double to Nathan Etheridge to begin the ninth.

“I got down 2-0 and kind of grooved him a fastball so in my mind, I knew he didn’t hit my best pitch. I kind of gave that double to him,” Schneider said. “In the back of my mind, I was still thinking that I got this. I figured if I get those other batters, the guy on second isn’t going to mean a thing. I was able to do that.”

Vallejo (21-14) took advantage of 12 Martinez walks and four hit batters — which all came in the same inning.

The Admirals grabbed the lead for good with two outs in the sixth when right fielder Chevy Clarke went opposite field against reliever Matti Doxter to give his team an 8-7 edge.

“It was actually right down the middle,” said Clarke, who was playing in the American Association before getting released and then re-joining the Admirals. “I was just looking for a pitch to hit and I wasn’t trying to do too much.”

The Admirals said goodbye to center fielder Tillman Pugh for the second time this season as he signed with Gary RailCats of the American Association. Vallejo picked up a player with the same last name (but no relation) in Brandon Pugh.

Brandon Pugh made an immediate contribution by doubling and scoring on a Nick Akins’ sacrifice fly to give the Admirals’ a short-lived 1-0 lead in the first inning. Pugh reached base all five times in the game.

The Admirals quickly tied it 3-3 in the second when Vladimir Gomez singled and was aboard on Brandon Fischer’s two-run homer to center field against Martinez starting pitcher Joe Jones, who lasted just 2 2/3 innings.

The Admirals chased Jones by sending 10 batters to the plate in the third inning. Jones hit four batters in the inning and walked another as Vallejo led 7-3.

That looked to be good news for Miller, who got double plays in the second, third and fourth but Martinez eventually tied it 7-7 on Will Decker’s RBI double.

That chased Miller as Garcia entered the game and retired Etheridge with a man on second to end the fourth and then pitched out of trouble in the fifth and sixth to earn the victory.

Reyes, the Benicia High grad, threw two scoreless innings as he had to work out of a first-and-third, one-out jam in the eighth, setting things up for Schneider in the ninth.

With one out in the ninth, Martinez thought it might have had a game-tying hit when Hughes hit a sinking liner to left but Akins managed to run it down at the last second.

“I thought (Hughes) might have sliced it a little down the line but you have Nick Akins down there, running down balls,” Schneider said.

Akins, who leads the league with 18 homers, was 0-for-5 with an RBI. Akins looked like he might crack his 19th long ball in the top of the ninth but Decker tracked it down at the wall.

The Admirals could not make up any ground on first-place San Rafael or second-place Sonoma and remain five games back of first place.