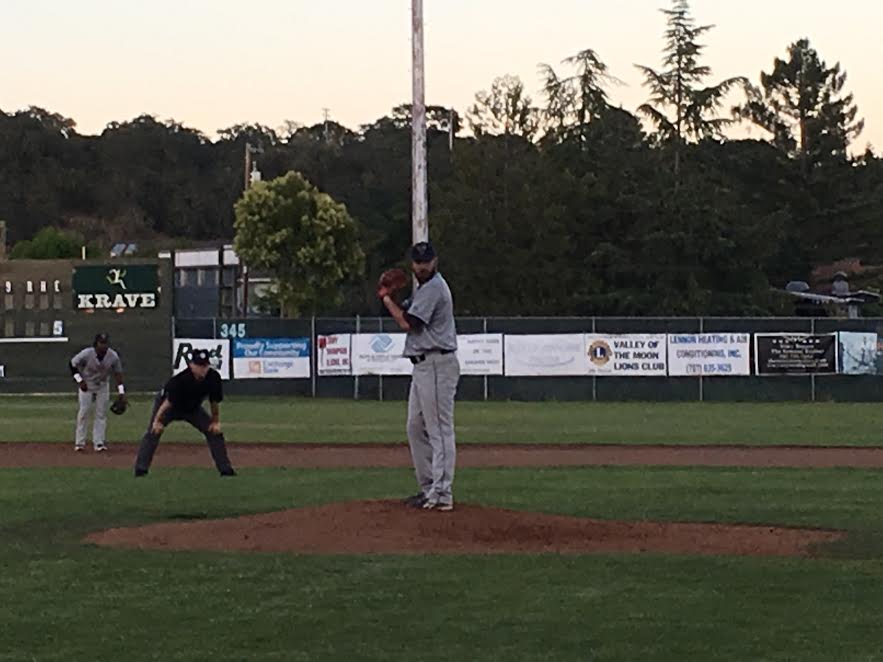 SONOMA, Calif. – The Admirals took a 2-1 lead with them into the eighth inning, only to see the Stompers use consecutive singles and a balk to tie the game and take the lead in the eighth inning of an eventual 4-2 victory by Sonoma on Wednesday night at Peoples Home Equity Ballpark at Arnold Field. With the loss, the Admirals slip to 4-7 while the Stompers improve to 8-3 overall.

Gerald Bautista drilled his second home run of the season with one out in the second to provide the Admirals a 1-0 lead. Manny DeLeon singled to left after Bautista’s homer and went to third on a single by Deybi Garcia. DeLeon came into score after a wild pitch by Sonoma starter Mike Jackson, Jr. and the Admirals led 2-0.

Sonoma answered back in the third inning after Scott David singled and went to second after Joel Carranza was hit by a pitch. A base hit by Isaac Wenrich enabled David to score after a wild throw from right-fielder Chevy Clarke got away from catcher Garcia.

Admirals starter David Dinelli (pictured above) worked five innings and allowed only an unearned run while striking out six and uncharacteristically hit five batters during his outing, but was able to strand seven runners before departing.

Admirals reliever Peter Reyes struck out three in two innings after taking over for Dinelli, and has now struck out 15 through his initial eight professional innings.

The Stompers left two runners on in the seventh inning, but Reyes was able to strike out Mora-Loera to escape with a 2-1 lead into the eighth.

A leadoff single by Brennan Metzger and an error by left fielder Shawn Payne brought him to second, and after Matt LoCoco used a bunt single to reach, put runners at the corners with no outs for the Stompers in the eighth. LoCoco stole second base and a wild throw by Garcia scored Metzger from third to tie the game at two.

After an error by Josh Evans, LoCoco advanced to third and scored on a balk as the Stompers took their first lead of the game at 3-2. Masa Miyadera came into to score after a fly out by David, giving the Stompers a 4-2 advantage.

In the ninth, Adam Ogburn struck out the side for Sonoma as the Admirals have now lost four of five against the Stompers this season. Ogburn improved to 2-0 this season after picking up the victory, while Evans falls to 2-1 after suffering the defeat. Jackson, Jr. struck out 11 through his seven innings of work and received a no-decision after the Stompers came back in the eighth.

Vallejo and Sonoma will square off once more in the series tomorrow at 6 p.m. with Brent Adheen scheduled to start for the Admirals and Tyler Garkow for the Stompers. The Admirals pregame show starts at 5:45 p.m. with Tim Fitzgerald and Dave Grant on the Admirals Baseball Network.