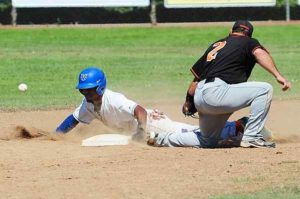 Vallejo Admirals Darian Sandford slides into second base for his 96th stolen base of the season. Sanford added three more stolen bases to extend the league record to 99. Chris Riley — Times-Herald

There’s no telling what would have happened if Vallejo Admirals center fielder Darian Sandford would have stole his 100th base.

Maybe he would have picked the base up and lofted it over his head like Rickey Henderson did when he became the all-time stolen base leader. It’s possible the base would have burst into flames on impact. We’ll never know.

Sandford’s legs produced 99 stolen bases in 2016, the most in the history of the Pacific Association. He produced 56 more steals than the previous record-holder Tillman Pugh, who had 43 in 2014.

There is not an official record book for independent baseball so it’s tough to tell where Sandford’s total ranks in baseball history.

Despite Sandford’s four steals, the Admirals dropped the season finale to the Pittsburg Diamonds 12-10 on a sun-kissed Sunday afternoon at Wilson Park.

Vallejo concluded its fourth season in the league with a 32-46 overall record. The Admirals again finished in last place but did post seven more victories than last season.

The 29-year-old stole second and third in the fifth and sixth innings, respectively. In his last at-bat in the eighth, he grounded out to second. Sandford was on the on-deck circle in the ninth inning but Diamonds reliever Joe Lewis struck out Andrew Rubalcava looking with two men on base to end the game.

“I came into the dugout and got some more batting gloves, hoping we could get a rally and get a walkoff win,” Sandford said. “I was one batter short. I actually had a feeling I was going to come up to bat with the bases loaded and hopefully I could get a hit up the middle and score two. It didn’t work out that way but I was glad we fought hard, came back and tried to win.”

The Admirals held leads of 5-0 and 8-7 but the Diamonds tied it with one in the sixth and four in the eighth.

Vallejo cut a four-run deficit to 12-10 in the ninth against a wild Aldo Ferrante, who walked Patrick Moriarty and Joe Hicks to start the inning. Ferrante wild-pitched Moriarty home and Hicks scored on a ground ball from Lydell Moseby. After two were out, he hit Aaron Brill with a pitch.

Lewis (the former Admiral), entered the game and walked Alian Silva, but on a 3 and 2 pitch he froze Rubalcava (the former Diamond) to end the game.

The Admirals had their share of late rallies this season although they didn’t always translate into wins.

“There have been a lot of ups and downs this season,” said catcher Cyle Figueroa, who had two hits and knocked in three runs in the finale. “Ever since P.J. (Phillips) took over, it’s just been a whole different ballgame. I think the biggest thing was we came together as a team in the second half and you saw us play better baseball.”

Phillips took on the duties of player-manager on July 1 as the entire coaching staff was relieved of its duties.

Sandford gave Phillips credit for helping him steal more bases in the second half.

“The biggest thing was P.J. told me to extend my leads at first base,” he said. “Once I got bigger leads, I got more confidence to go on any pitch.”

On Sunday, the Admirals led 5-0 early as they scored two in the third and three in the fourth against Pittsburg starter Marquis Pettis.

Vladimer Gomez lined a double to left-center with two outs in the third as Brill and Silva, who had both singled, came around to score.

Vallejo tacked on three more in the fourth as Miles could not field Hicks’ ground ball to begin the inning. Moseby followed with an RBI triple, Figueroa had an RBI double and Brill followed with a sacrifice fly for the 5-0 edge.

The Diamonds, however, batted around and scored seven times in the fifth against Admirals starter Kida De La Cruz. Kelly Starns made it 5-3 on a three-run homer. Gomez lost Miles’ fly ball in the sun in right field and Jay Almendral and Ian Hagenmiller had run-scoring singles. Rich Mejia’s chopper over Moriarty, the third baseman, made it 7-5 and chased De La Cruz from the game.

“We got a couple of unlucky bounces and then (Gomez) lost the ball in the sun. That happens. It’s baseball,” Figueroa said. “But Kida pitched his butt off today. He kept the ball down and mixed up all of his pitches well. That’s all you want from your starter. Sometimes the field plays strange and you can’t do anything about that.”

Vallejo would take a brief 8-7 lead with three runs in the fifth. The last two runs scored on Figueroa’s opposite-field, two-run single.

Pittsburg (36-42) tied the game 8-8 in the sixth when Sandford misplayed Starns’ fly ball, which went for a triple. Miles followed with a sacrifice fly.

Wendall Floranus pitched well in relief of De La Cruz for 2 2/3 innings but the Diamonds got to Marquis Hutchinson for four in the eighth. Thomas Shull’s two-run single scored the go-ahead run.