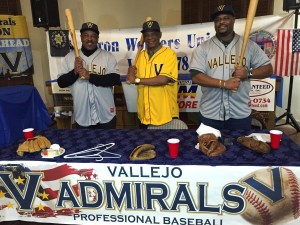 The Vallejo Admirals are excited to announce Mike Samuels as Field Manager for the 2016 season.

Samuels joined the Admirals as their First Base Coach at the midway point of the 2014 season. He added the title of Player Development Director to his coaching duties in 2015, and has functioned as the team’s interim manager since this past October.

Samuels has spent nearly his entire life in the game of baseball. A former catcher, Samuels played College Baseball at Prairie View A&M, and then Dallas Baptist University.

“I’m gonna bring leadership, professionalism, and all the qualities that are needed to manage a baseball team,” Samuels responded when asked what he brings to the table as a manger.

He began his professional career in the Cincinnati Reds organization after being signed by Tony Robello. He spent 1972 with the Texas Rangers organization, before spending the following six years playing in Independent Baseball. 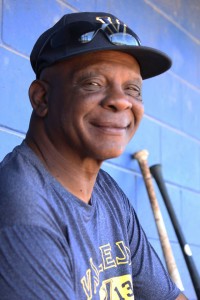 In 1982, he joined the Fairfield Indians, where he spent 10 years, both as a player and then his debut as a coach.

He has been a coach at different levels ever since, with stops at Patten College in Oakland, the Sonoma County Crushers, Evansville Otters, Dubois County Dragons, and at his alma mater, Dallas Baptist University. He also spent three years as a scout for the Boston Red Sox and Tampa Bay Rays organizations.

“The choice was natural,” Admirals Owner Kevin Reilly said. “Mike has great baseball knowledge and a strong connection to the players. He certainly knows the team from having coached here in 2014 and 2015, and has a long baseball connection to this whole county. When you add the quality of the staff he’s bringing with him, it was hard to figure anybody else. We’re looking forward them fielding a strong team this year.” 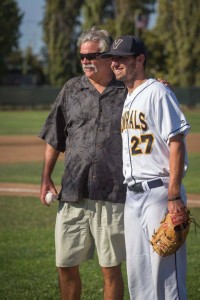 Samuels’ pitching coach will be former big leaguer, Warren Brusstar. He currently coaches in his hometown and at his alma mater, Napa College. Brusstar finished his collegiate career at Fresno St, and signed with the Phillies in 1974 after being drafted in the fourth round. He won a World Championship in 1980 with Philadelphia.

“I enjoy giving back and teaching what I learned to players,” Brusstar said regarding his passion for coaching. “I’ve got over 20-yrs experience in baseball, as a player for nine years in the major leagues, and as a coach for a dozen years now.”

Also joining Samuels’ staff is former Cubs draft pick and Richmond native, Tim Wallace. Wallace currently coaches at Contra Costa Community College, and has managed at the independent level. He had a 12-year career as a player in the minors and independent baseball.

Rounding out Samuels’ staff is former Dodgers draft pick, Lonnie Jackson. Jackson has played all over the world, and also has competed against the Admirals as a player and coach with the Pittsburg franchise of the Pacific Association.

“When I went out and talked to Warren Brusstar, and Tim Wallace, and Lonnie Jackson, I knew I had three of the best baseball men that I could get my hands on,” Samuels said. “This is one of the strongest staffs in minor league baseball at this time, and I’ve seen a lot of ‘em.”

“Not only do we have a terrific staff, but the team we’re gonna put on the field will make people wanna come see us, rather than make the trip to the see the Giants or the A’s.”

Vallejo couldn’t be happier to have Samuels’ wealth of baseball knowledge, connections in the industry, and nearly four decades of coaching experience at the helm of the Admirals!