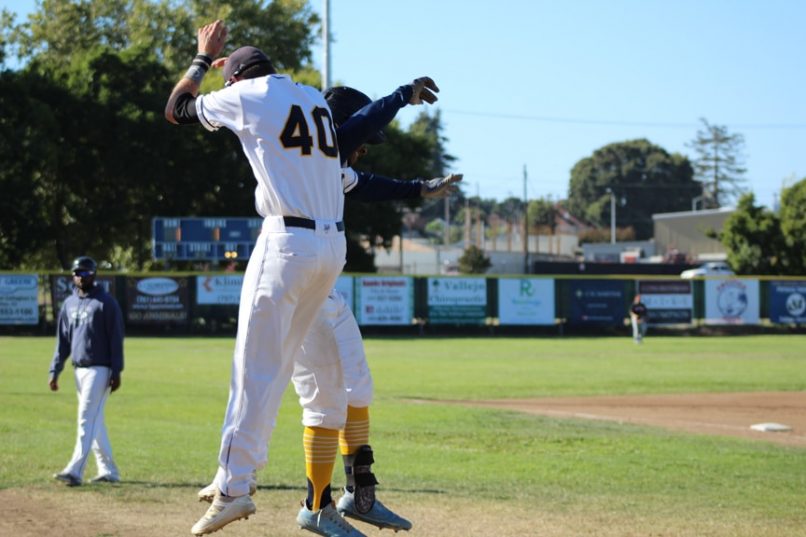 First, the Vallejo Admirals’ batters made the Pittsburg Diamonds lose their cool. Then the sluggers made them lose the game.

The Admirals No. 8 and No. 9 hitters in the lineup, Chris Fornaci and Quintin Rohrbaugh, drove in a combined six runs with six hits. With solid pitching from starting pitcher and Benicia High graduate Peter Reyes as well as a solid outing from reliever Demetrius Banks, the Admirals cruised to a 12-4 victory Saturday afternoon at Wilson Park.

Fornaci collected four RBIs as he hit two home runs in the game. After his first home run, in which the ball seemed to walk a tightrope with the left field foul line before hooking fair, Fornaci was greeted at home plate by Pittsburg Diamonds starting pitcher Travis Blackley, who uttered words to the Admiral third baseman. Both benches emptied as the umpires repeatedly told both managers to get their squads back to the dugout and off the field.

Fornaci, who just grinned and seemed puzzled after the first homer, was still a little confused after the game.

“He was talking to me as I rounded the bases. You know, sometimes in the heat of the game … the tension just builds up I guess,” Fornaci said, shaking his head. “Sometimes that’s just how it goes.”

Fornaci’s homer was the Admirals’ second of the game, as Tillman Pugh put Vallejo up 1-0 in the bottom of the first when he lined a solo home run to center field.

Pittsburg came right back, however, in the top of the second when Yiecok Calderon hit a solo home run of his own to right field to make it 1-1.

After Fornaci’s homer made it 3-1, the Diamonds (25-25, 4-7) came back to tie the game at 3-3 as Jose Garcia walked, stole second and later scored on an RBI single by B.J. Guinn in the top of the third. Garcia scored just a fraction of a second ahead of Pugh’s throw from center to catcher Michael Blanke and the score was 3-2.

In the top of the fifth the Diamonds tied the game 3-3 on a sacrifice fly to right by Guinn, and that chased Reyes from the game. Banks came on in relief and held the Diamonds to just the one run in the inning. Banks held the Diamonds scoreless for the next three innings and only gave up one run, in the ninth inning.

“I really have to give it up to the pitching tonight,” Admirals manager P.J. Phillips said. “They kept us in the game. Reyes pitched well as a starter and D-Banks came in and shut them down in relief. For Reyes, his fastball and change-up were working and even though his curveball wasn’t, he kept battling. The main reason I took him out in the fifth was he seemed a little winded. That was kind of the plan, to have Reyes have a good start and then get Banks in there. He pounded the strike zone and got a lot of quick outs for us.”

After the win, Reyes discussed the start at home in which a few fans showed up wearing the hat of Reyes’ alma mater, Benicia High.

“Early in the game I thought I located my fastball well and I felt fresh,” Reyes said. “In the third and fourth inning I lost a little bit of my rhythm. I was happy the defense played well and the offense was good and we ended up getting the win.”

In the bottom of the fifth with the game tied, Fornaci was at it again. The Admiral hit another home run to left, this one leaving the yard quicker than a dragster at Sonoma Raceway. This time, the only people to greet Fornaci was his teammates in the dugout as Vallejo took a 4-3 lead.

Vallejo added to the lead later in the inning when Michael Blanke had an RBI single to left to make it 5-3. The lead was stretched to 7-3 a few moments later when catcher Alex McKeon couldn’t find a wild pitch by Blackley. David Kiriakos as well as Blanke scored in the confusion to make it 7-3.

While McKeon couldn’t find the ball, Blackley soon had trouble finding his control. For the second time in the game the left-handed pitcher seemed to loose his cool as he yelled “Sit down!” to Vladimir Gomez from the mound after striking him out to end the inning. While walking back to his dugout Blackley then mocked Gomez’s three-clap routine that Gomez does before entering the batter’s box. Once again, the umpires tried to regain control as Gomez looked on with bewilderment but also with a huge smile. Gomez finished the contest with two hits, including a double.

“I couldn’t say what was going on there,” Phillips said. “Everyone’s competitive. I don’t know. We seem to play them every day and sometimes you just get tired of just seeing someone every day. We’re too similar, competitive teams that have speed and power that are always trying to win.”

Vallejo added another run in the bottom of the sixth on a RBI single to left by Rohrbaugh that made it 8-3. Rohrbaugh, batting last in the Admirals lineup, looked like a cleanup hitter with his two doubles and two RBIs in the contest.

“It’s a great win for us against a very good team,” Fornaci said. “We’re looking to turn things around in the second half and a game like this where we score 12 runs is a very good team effort.”