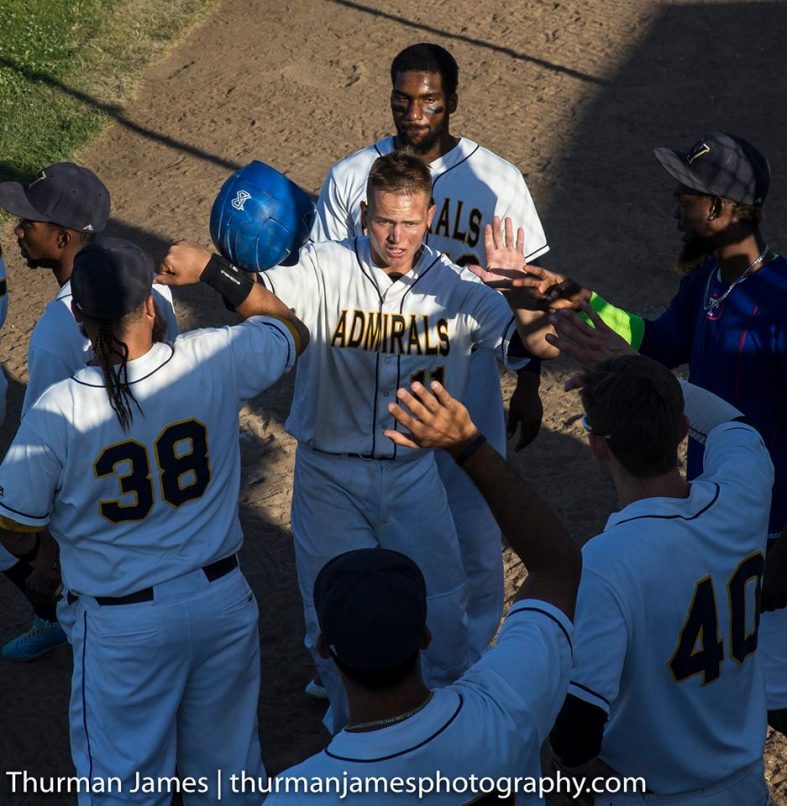 VALLEJO, Calif. – The Admirals went down 4-0 after two innings, but scored 12 unanswered runs to pull away from the Pacifics and won 12-4 on Saturday night at Wilson Park. The win snapped a three-game losing streak and Vallejo got a pair of two-run home runs from Nick Akins in the win. The Admirals improved to 12-26 overall, while San Rafael slipped to 16-22.

Admirals starter Marquis Hutchinson picked up the victory after settling down and won his third game of the season. Hutchinson gave up four early runs, but only allowed two more hits the rest of the way and shut out San Rafael as the Admirals came back.

Down 4-0, Vallejo went to work against San Rafael starter James McReynolds in the third inning. After Mike Blanke reached on a fielder’s choice, Akins drilled a 1-0 pitch over the left-centerfield wall for his ninth homer of the year.

Chris Fornaci (pictured above) drove in Chevy Clarke in the fourth inning with a sacrifice fly, slicing the deficit to 4-3.

Vallejo scored four times in the fifth inning – including an RBI single from Graylin Derke – to provide the Admirals their first lead of the night. The Admirals sent nine hitters to the plate in the four-run fifth, as Tillman Pugh, David Kiriakos, Blanke and Akins all scored.

Admirals reliever Mahlik Jones struck out four batters in his two scoreless innings, allowing only a two-out single to Spencer Nielsen in the eighth.

Grayson Weber tossed a scoreless ninth inning for Vallejo, as the Admirals beat the Pacifics for the fourth time in 11 tries this season.

San Rafael left nine runners on base, including seven through the game’s first five innings, while the Admirals left six on base in the victory.

With the series tied at a game apiece, the Admirals and Pacifics wrap up the first half of Pacific Association play with a 1 p.m. PT matinee Sunday at Wilson Park. Christopher De Leon is the scheduled starter for the Admirals, while Nick DeBarr is slated to start for the Pacifics.

The game can be heard live on the Admirals Baseball Network, with Dave Grant and Daniel Barrera calling the action. The Admirals Pregame Show begins at 12:45 p.m. Be sure to follow the Admirals on social media, including Twitter (@VallejoAdmirals).

NOTES: Akins’ two home runs places him No. 4 in Admirals single season history with 10 … Brandon Williams had his five-game hit streak snapped after he struck out four times on Saturday … Kiriakos now has a five-game hit streak after his single in the first inning … Blanke drove in three runs on Saturday with a pair of doubles … Clarke snapped out of an offensive funk, smacking a triple in the fourth and a single in the fifth … Fornaci was hit by his ninth pitch this season in the fifth inning, which drove in a run since the bases were loaded at the time.