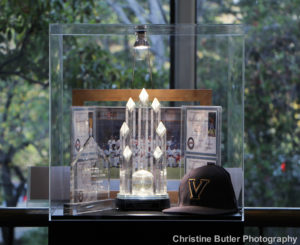 The Vallejo Admirals are preparing to defend their Pacific Association championship, and are pleased to announce the release of the club’s 2018 promotional calendar. Individual tickets to 2018 Admirals games at Wilson Park are now available, and the purchasing process is simpler than ever before. Guests are invited to point their browsers or mobile devices to the Admirals’ tickets perma-link, bit.ly/admiralstickets, and may also click “Buy Tickets” from the vallejoadmirals.com “Tickets” menu. Special rates for groups are available all season long.

In the spirit of “All Community, All Fun,” the Admirals are lining up another schedule of promotions and special events, tailored to appeal to baseball newcomers and diehards alike. On Opening Night, Thursday, May 31, the Admirals hoist their championship banner at Wilson Park, and host the season’s first contest against the Pittsburg Diamonds. As part of the championship festivities, Mayor Bob Sampayan is scheduled to throw out the season’s first ball. The U.S. Army is bringing a rock wall to Wilson Park, and visitors can scale the wall throughout the evening. Vallejo Little League and Northgate Church are also featured guests on Opening Night.

On, Friday, June 1, the Championship Pin Giveaway highlights the season’s second ballgame, sponsored by Team DGDG. When the Admirals return from the road, the festivities continue right away with Pride Night on Thursday, June 7, and Little League Night on Friday, June 8. The Admirals’ Special Events page has more information.

The club proudly brings back its signature “League of Chefs” Gourmet Wednesdays, with innovative ballpark fare that simply can’t be found anywhere else in the league. Some of last year’s delectables included a dungeness crab sandwich, lamb merguez sausage, a “PLT” sandwich (pork belly, arugula and heirloom tomato sandwich), and tuna poke. In collaboration with the Admirals’ local culinary partners, the 2018 menu is being finalized, with its own announcement to follow shortly.

Having helmed the Admirals to a 2017 league crown, P.J. Phillips, the incumbent Pacific Association Manager of the Year, is back to guide the ballclub in its attempt to repeat. “I am happy to be back,” says Phillips, “and excited to get to work to win another championship.”

The Admirals’ charge to last year’s championship starred Tillman Pugh, the league’s Most Valuable Player. Pugh batted .322 with 18 home runs and 58 runs batted in, and he also swiped 30 bases. The Admirals’ pitching staff, which finished the season strong, featured top starter Demetrius Banks, who went 7-3 and struck out 86 opposing batters, and league Reliever of the Year Sammy Gervacio, who saved 18 games. P.J. Phillips, his staff, and the Admirals front office have redoubled their efforts to recruit another formidable roster for the 2018 campaign.

The Pacific Association has expanded to six franchises, with new entrants in the Martinez Clippers and Napa Silverados. Along with the returning Pittsburg Diamonds, San Rafael Pacifics, and Sonoma Stompers, these ballclubs pose a constant competitive challenge to the Admirals, holders of the championship trophy.

Individual tickets, season tickets, and group packages of various sizes are all available through the Admirals office at 444 Georgia St., adjacent to Sonoma Blvd. in the heart of downtown Vallejo. The club can also be reached at (707) 641-1111, and through their Web site, www.vallejoadmirals.com, which is regularly updated with new content.