Admirals closer Tim Holmes started the season with a bang, and the Bronx Bombers took notice. The 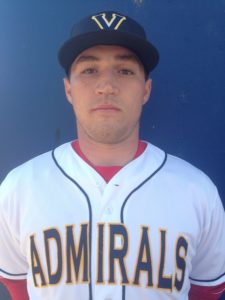 rookie out of San Jacinto College struck out 30 batters in 14 and 1/3 innings for Vallejo, while allowing just two earned runs. He even pitched in four straight games and five out of the first six to start the season.

The Jacksonville, FL native was definitely taken aback by the Yankees interest in him. “When the Yankees called, I was dumbfounded and speechless,” Holmes said. “As soon as I called my mom, I cried like a little kid. But I have had this goal my whole life, and this is just the beginning.”

Admirals manager Mike Samuels saw the 6’2” 210 lb. right-hander pitch in Florida and invited him to spring training. “He was throwing hard with good control, and when the lights come on he goes to a whole other level,” Samuels remarked about Holmes’ clutch performances. “He showed he was a pro, and when I called on him he was always ready. We worked on that curveball to compliment the fastball, and he took off from there.”

Samuels said the Yankees asked him how Holmes would fit in the clubhouse, and Samuels raved about him as a person as much as he does as a pitcher, maybe more.

“Holmes is such a good kid,” Samuels said. “He’s very mature for 22 year old, very respectful, a great teammate, and I couldn’t be happier for him.”

Holmes reflected on his time in Vallejo as he prepared for the next chapter in his baseball career. “My 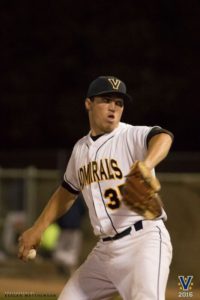 time with the Admirals was incredible,” Holmes commented. “I made a couple of life-long friends and many memories. I am forever grateful for the opportunity Coach Samuels and Coach Warren Brusstar gave me. I learned a lot form my experience.”

Samuels noted signings like this do wonders for the Vallejo franchise and the league. “It really helps our ball club and the league knowing that major league organizations are watching us to find players.”

Holmes joins former Admirals first baseman Nathan Tomaszewski as the two members of the franchise to be signed by a big league organization. Tomaszewski was the team’s home run and RBI leader in 2013, and was signed out of Admirals spring training in 2014.

That makes five players who have now been signed by Major League Baseball organizations out of the Pacific Association of Professional Baseball Clubs. San Rafael moved up slugger Matt Chavez to the Padres in 2015 and pitcher Max Beatty to the White Sox this season. Sonoma pitcher Santos Saldivar was signed by the Brewers organization before the 2016 season began.

Holmes will report to rookie ball for the Yankees this weekend. For more Admirals updates, subscribe to our newsletter in the subscription form at the bottom of the page.