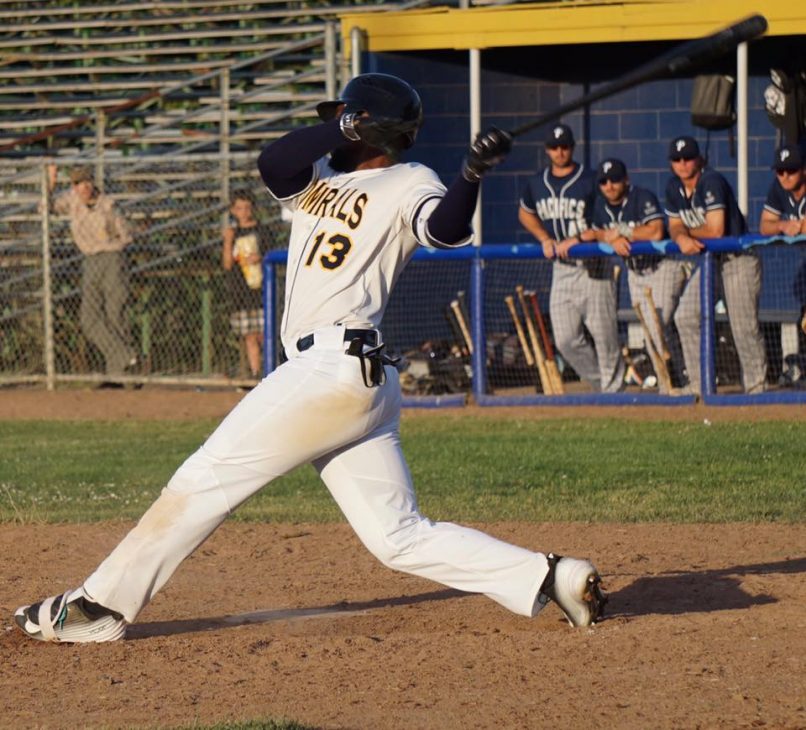 VALLEJO, Calif. – The Admirals used a trio of home runs and a solid pitching performance from Brent Adheen to beat the San Rafael Pacifics, 9-3 and take the season-opening series at Wilson Park. Gerald Bautista, Graylin Derke and Nick Akins all homered for the Admirals, while Adheen allowed only two earned runs through seven innings with five strikeouts to win for the first time this season. The Admirals remained undefeated this season at 2-0, while the Pacifics fell to 0-2.

“Tonight was a good team win and my focus was to throw strikes and get outs,” said Adheen. “This group loves each other – we get a long and are confident in one another to do our jobs. This is only the beginning.”

The Pacifics answered back in the fourth inning with three runs of their own, as Miles Williams, Brent Gillespie and Micahel Rizzitello all scored to cut the Admirals lead, 5-3.

The Admirals, though, answered back in the fourth after a Vladimir Gomez double and Akins RBI single. Vallejo would add two more runs in the fifth as Manny DeLeon scored on a sac-fly RBI by Clarke and an RBI single by Derke that scored Bautista.

After a pair of wild pitches by San Rafael’s Eric Thomas in the eighth inning, Pedro Perez scored the final tally of the evening for the Admirals.

Adheen retired eight of the final ten hitters he faced – including a pair of strikeouts – and improved to 1-0 this season. The left-hander is now 4-1 in his Admirals career, with 30 strikeouts over his 46 career innings. Former big leaguer Sammy Gervacio made his season debut and struck out the final two batters he faced to close out the game.

After winning their fourth consecutive season opener last night, the Admirals took a series from San Rafael for the first time since Aug. 4-6 of last year. It’s the first series victory over San Rafael at Wilson Park since July 5-7 of last season.

Notes: Derke continued his scorching start to the season, going 2-for-4 tonight and has started the season by going 4-for-7 with five RBI and three runs scored … Akins is 5-for-10 to begin the season, including a solo HR and a pair of singles tonight … Bautista went 3-for-4 tonight and is 4-for-9 to open the year … with tonight’s victory, the Admirals are now 19-19 all-time against the Pacifics at Wilson Park.

First pitch for tomorrow’s series finale is at 1:05 p.m. with right-hander Marc Rutledge scheduled to start for the Admirals. The pre-game on the Admirals Baseball Network begins at 12:30 p.m. with Dave Grant. Check www.vallejoadmirals.com for broadcast information and upcoming schedule information.