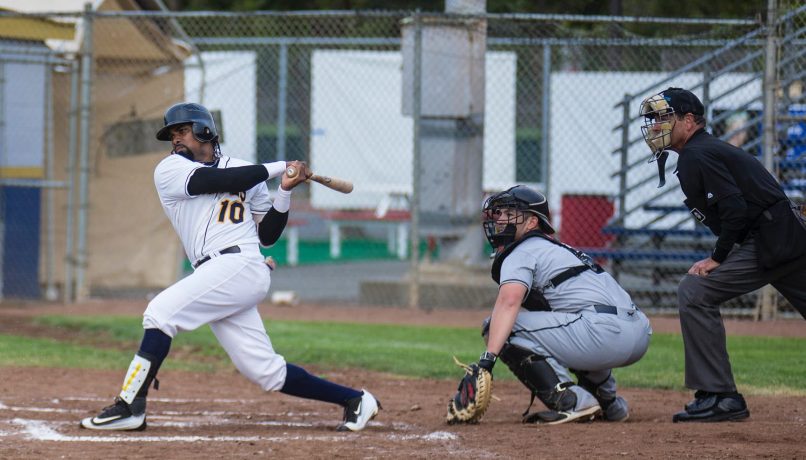 PITTSBURG, Calif. – On a blustery and windy day at Winter Chevrolet Stadium, the Pittsburg Diamonds held the Admirals scoreless through seven innings and used timely hitting and efficient pitching to win 6-3 on Saturday night. The Admirals dropped to 3-5 overall and have lost two in a row, while the Diamonds improved to 4-3 and have won four straight games.

Pittsburg took an early lead after an error by shortstop Pedro Perez enabled Jose Garcia to reach base and take second on the errant throw. After a pair of strikeouts by Admirals starter Marc Rutledge, a single by Vinny Guglietti brought home Garcia for a 1-0 advantage.

Rutledge struck out the side in the second and after the Admirals put two runners on with no outs to lead off the third, Vallejo was unable to bring in a run after a fly-out and a pair of groundouts. The Admirals left five runners on base through the first three innings.

Admirals left eight runners on base through the first six innings after collecting eight hits, including two hits by Clarke.

Rutledge was lifted for reliever Demetrius Banks after he allowed a one-out single from Valdez that plated McKeon and gave the Diamonds a 5-0 lead.

Through the first 16 innings of the series with Pittsburg, the Admirals went scoreless yet tallied 14 hits but left 18 runners on base and had several double-plays end their momentum. Derke led off with a single up the middle, but was picked off first before a solo home run by Akins, snapping the Admirals scoreless innings streak.

Akins’ home run sparked the Admirals offense, as Bautista walked and consecutive singles by DeLeon and Deybi Garcia got Vallejo within 5-2. Garcia brought home Bautista with his first RBI of the season.

The Diamonds responded in the bottom part of the inning after an RBI single by McKeon that brought in Yiecok Calderon for a 6-2 lead.

Vladimir Gomez led off the ninth with a double to left and went to third on a wild pitch. A groundout by Clarke brought in Gomez to bring the Admirals closer at 6-3. Akins singled with two outs in the ninth, but a strikeout by Payne ended the Vallejo rally.

Rutledge suffered the loss and falls to 0-1 this season and Pittsburg starter Skylar Shaw-Fuss picked up the win to improve to 1-1.

Sunday’s series finale is scheduled for 1 p.m. at Winter Chevrolet Stadium in Pittsburg. Right-hander Marquis Hutchinson is the probable starter for the Admirals, while Pittsburg is set to start Corey MacDonald, who is scheduled to come off the disabled list. The pregame show on the Admirals Baseball Network begins at 12:45 p.m. PT with Tim Fitzgerald and Dave Grant. Check www.vallejoadmirals.com for broadcast and schedule information.