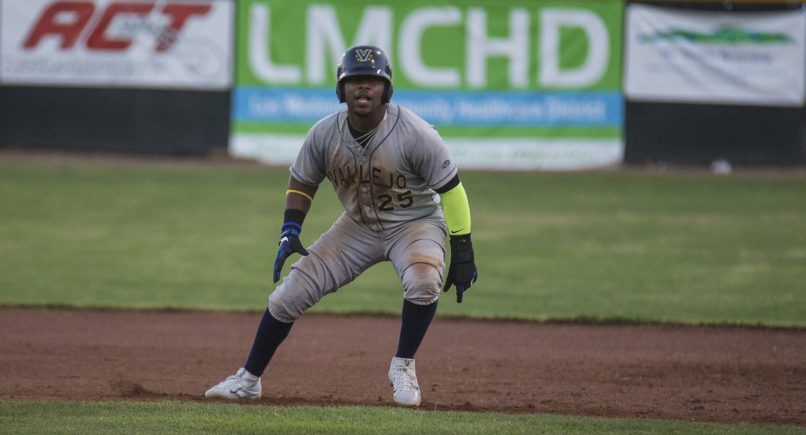 PITTSBURG, Calif – In sweltering 100-plus degree temperatures, the Admirals edged the Pittsburg Diamonds 6-5 with two runs in the ninth inning against Pittsburg closer Jordan Brink to salvage the final game of a Pacific Association series at Winter Chevrolet Park.

“This means a lot,” said first baseman Nick Akins who launched his league-leading fifth homer of the season in the fourth inning. “I know we’ve lost five in a row so we needed that, just for our confidence to get us going into the off day. These are long rides home when you don’t win. You’d have to sit on that for Monday so this is good.”

The week looked like it might end on an 0-6 note as the Admirals could not hold onto a 4-3 lead and trailed 5-4 heading into their last at-bat. Akins walked to lead off the inning and Tillman Pugh sacrificed him to second. Brink struck out Gerald Bautista but a wild pitch allowed Bautista to reach first.

Brink (0-1) then walked pinch-hitter Deybi Garcia to load the bases before walking Pedro Perez and Graylin Derke to force in the tying and go-ahead runs.

The win meant a lot to Vallejo manager P.J. Phillips as well.

“It meant everything,” Phillips said. “We’ve been fighting and competing out there but this one starts us off well for the next series.”

The Admirals (5-10) got six excellent innings from No. 5 starter Joe Watson, who lasted just one-plus inning in his last start. This time, Watson scattered six hits and three runs (two earned), striking out seven and walking just one.

“For me, it’s just a matter of getting everything going,” Watson said. “Coach Banks told me to speed up my delivery. I feel like I am an athletic guy. I just want to establish my rhythm. Let them hit me, come to them and not let them come to me. I establish my game. ”

Watson pitched as a short reliever for the Admirals last season but asked Phillips about being a starting pitcher this summer.

“I called P.J. about two weeks before I came out here,” he said. “I said, ‘There are some things I’d love to work on. I feel like I’d love to be a starter this year.” I wanted to find that consistency and just repeat everything. I felt like I could do that by starting.”

The Diamonds (8-6) took a 1-0 lead in the third on Jose Garcia’s ground-rule double that bounced over the left-field fence, scoring Austin Fraker. Watson recovered with runners still at second and third to limit the damage.

Vallejo grabbed the lead at 2-1 on Akins’ homer over the center-field fence against ex-Admiral Dennis Neal. Shawn Payne singled and was aboard on the Akins’ homer.

“The other night I knew I got it,” Akins said about Friday. “This one, I knew I hit it OK but I didn’t square it up great but I knew it had a chance. I knew I hit it well but I wasn’t absolutely sure.”

Pittsburg tied the game 2-2 on an unearned run in the fourth and then went ahead 3-2 after a solo homer from Javier Marticorona over the left-field fence in the fifth.

The Admirals grabbed the lead back again at 4-3 after an opposite-field, two-run homer from Vladimir Gomez in the sixth with Chevy Clarke aboard. It was Gomez’s first homer of the season and it came at a perfect time.

Phillips turned the game over to the bullpen after six innings and for the first time all season, Benicia High grad Peter Reyes wasn’t perfect. Pittsburg scored twice in the eighth inning against Reyes (one earned), who was also charged with a balk. An error from Akins at first base did not help get the inning started well but the Diamonds took advantage with J.J. Wagner and Fraker picking up consecutive RBI singles.

Despite the rough outing, Reyes (1-0) picked up his first professional win and Gervacio earned his third save.

Although the temperature reaches triple-digits in Pittsburg, Watson did not seem to mind.

“I’m from North Carolina. It gets super hot out there,” he said. “At the same time, it’s the summer. It’s hot for us, it’s hot for them.”

Notes: Two Admiral pitchers had to play significant roles in the ninth inning. When Garcia reached base in the ninth, Phillips replaced him with pinch-runner Marquis Hutchinson, Saturday’s starting pitcher. With Andrew Rubalcava already out of the game, reliever Josh Evans put on the catching gear and caught Gervacio. … Rubalcava had a rough day behind the plate, twice getting hit on backswings from the Diamonds. … Clarke, who had two hits, is hitting .377, third in the league. … Former Oakland A’s slugger Jose Canseco signed with the Diamonds and is expected to play in next weekend’s Admiral series in Pittsburg. … The Admirals host Sonoma in a three-game series starting on Tuesday.