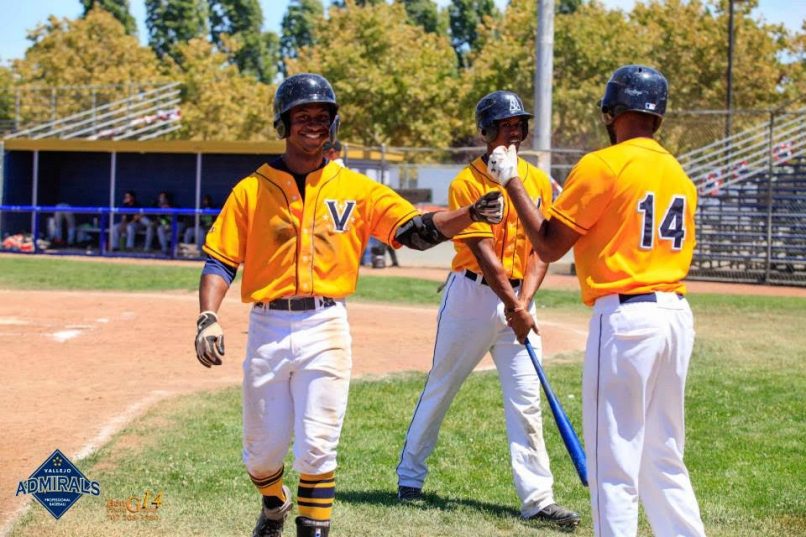 The forecast in the Bay Area on Thursday morning called for rain, but it didn’t affect the game between the Vallejo Admirals and Sonoma Stompers later that night at Wilson Park. By the time Admiral pitcher David Dinelli threw the first pitch at 6:43 p.m. the rain was long gone.

Instead, the Admirals offense showered the field with hits.

After three straight losses, Vallejo’s offense rebounded nicely as everyone in the starting lineup reached base at least once while collectively banging out 12 hits in an 8-6 win. The victory put the Admirals record back at .500 (3-3) while Sonoma suffered its first loss of the season (5-1).

With the game tied 5-5, the Admirals went ahead for good with three in the seventh, including the go-ahead RBI by third baseman Gerald Bautista.

Vallejo manager P.J. Phillips said the team had batting practice on Thursday morning, but it was shorter than usual.

“I think we actually took less swings,” Phillips said. “We had some good hacks in batting practice and then got out of there. Everyone in the lineup did a good job today of going deep in counts and laying off pitches in the dirt.”

The Admirals took a 1-0 lead in the bottom of the first. Leading off the frame, Vladimir Gomez doubled off the wall in center and later scored when Shawn Payne had a bloop RBI single to center that Sonoma’s Matt Hibbert couldn’t quite catch.

The Stompers responded when Dinelli walked two batters with two outs in the top of the second. Sonoma then made the walks hurt when Daniel Comstock blasted a three-run homer to right field to make it 3-1.

Not to be outdone, Vallejo came storming back in the bottom half of the second. Sonoma starting pitcher Juan Espinosa walked the first two Admirals and Vallejo took advantage when Pedro Perez drove home Tillman Pugh on a RBI single to right to make it 3-2. Gomez had an RBI groundout to drive home Graylin Derke and make it 3-3 and then Chevy Clarke had an RBI double to drive home Perez and give the Admirals a 4-3 lead. Perez finished with two hits.

Sonoma tied the game 4-4 in the top of the fourth but Vallejo once again took the lead in the bottom half of the frame when Clarke hit a home run to left field to make it 5-4. Clarke had two hits and two RBIs on the night.

“The pitcher was doing a good job of locating his pitches, so I just tried to stay short in my approach,” Clarke said. “I tried to stick to my game plan and find a pitch to drive. I was sitting offspeed the whole time and then reacted to the fastball. I got the pitch and didn’t waste it (on the home run).”

Dinelli left the game after six innings, having only allowed three hits but walking six. Phillips was very impressed with his outing.

“He was very effective and the defense was good behind him,” Phillips said. “He’s a pitbull. He’s one of our go-to guys when we really need a win.”

Grayson Weber relieved in the top of the seventh for Vallejo but soon ran into trouble. After walking Comstock, Yuki Yasuda had a sacrifice bunt to put Comstock in scoring position. Weber then threw two wild pitches to send Comstock home with the tying run at 5-5.

Once again, however, Vallejo’s offense responded. The Admirals scored three runs in the bottom half of the seventh, as they collected five straight hits with two outs. After Payne doubled, Bautista singled to left to drive him home and make the score 6-5. It was the third hit of the night for Bautista.

“I was just going with my plan to always see the ball and then get good contact,” Bautista said. “We’ve had really good chemistry on this team. Today we felt we had to leave last night behind and just make some adjustments. We needed to be more consistent.”

After Pugh followed with a double to put runners on second and third, Derke came through in the clutch with a high chopper up the middle that he was able to beat out for an infield single. On the throw to first, Pugh used his speed to score from second, sliding just under the tag of catcher Comstock to make it 8-5. Pugh finished with a double and two walks to go with his two runs. Derke had a hit and a walk.

The Stompers added a run in the top of the eighth inning when Yasuda singled to right to drive home Miyadera to make it 8-6, but Admirals reliever Josh Evans (2-0) got out of the inning when he induced Hibbert to ground out.

Sammy Gervacio came into pitch the ninth inning for the Admirals and retired the side in order for the save. He struck out two batters.

Vallejo travels on the road to Pittsburg on Friday to begin a nine-game road swing.