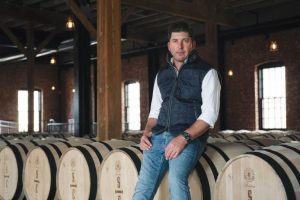 Photo by Margaret Pattillo for Forbes

VALLEJO, Calif. — The Vallejo Admirals announced the sale of the team from Kevin Reilly to Dave Phinney, a Napa Valley winemaker and one of the partners in the Nimitz Group..

“It has been a great ride,” Reilly said. “It started as a way to give Vallejo residents a place to gather, have fun and see the best of their city, featured in the between-inning events. It became a small part of the resurgence of Vallejo. I am honored to have been part of it and I’m happy it will be in excellent hands going forward.”

“I am very excited to be a part of this next chapter of the Vallejo Admirals,” Phinney said. “We take this responsibility very seriously and with that in mind I am proud to announce that my good friend Carmen Policy has agreed to assist us at an advisory level with an eye towards joining the ownership group that includes another good friend two- time World Series Champion and Petaluma native Jonny Gomes.”

Reilly brought stability to the franchise after it was sold multiple times in its early history. He served as a silent partner in 2015, then purchased the entire team during the season. He began operating the team in 2016.

The next year, manager P.J. Phillips and Pacific Association Most Valuable Player Tillman Pugh helped lead Vallejo to a share of the second half championship. In the playoffs, the Admirals defeated the Sonoma Stompers to claim the title.

“It was an exciting season,” Reilly said. “We went pretty much from last to first once P.J. got the pitching working. He always recruited strong hitters. I will never forget our outstanding third baseman and all-around gamer Chris Fornaci, whose two-run homer late in the playoff game put the championship away for us. I’d say Chris had the most important hit ever for the Admirals.”

The Admirals returned to the Pacific Association playoffs in 2018 and 2019 and are poised for more success in 2020.

Phinney is the founder of Savage & Cooke distillery, which opened on Mare Island in 2016. He has a long history in the wine business and is part of the Nimitz Group, which is working to develop the former naval base property.