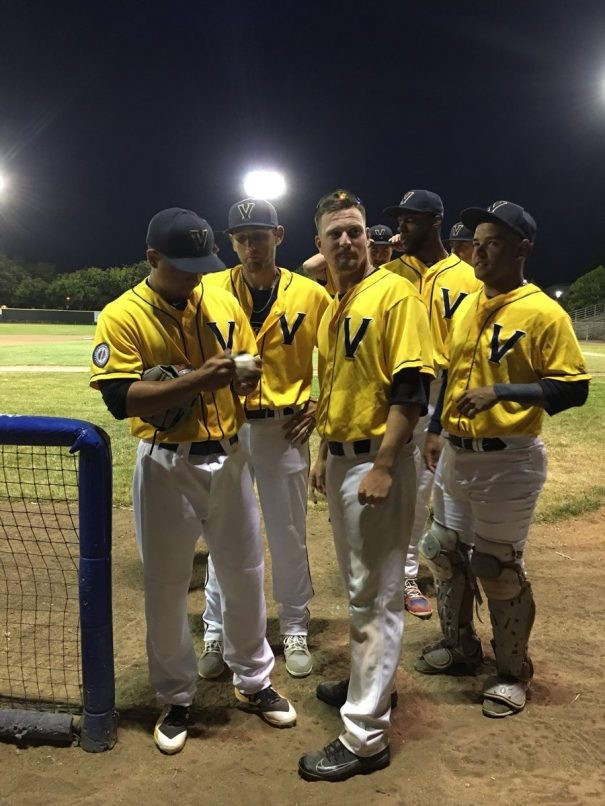 On Thursday night the Vallejo Admirals showed off their new championship rings. On Friday night they brought out the brooms.

A night after exploding with offense, the Admirals showed off their pitching against the Pittsburg Diamonds. Vallejo’s staff seemed to be more in control than a Monopoly player owning all the railroads, Boardwalk and Park Place as it allowed just two hits in a 5-3 win at Wilson Park.

Even though the sweep is just two games in the first of many two-game series this season rather than the usual three-game series, Vallejo outfielder and 2017 MVP Tillman Pugh will take it as the team is undefeated.

“Even though it’s just a two-game series you still approach everything the same way,” Pugh said. “You come out every day trying to win and leaving everything between the lines. I like that we’ve been battling and we’ve been picking each other up. I like what I see so far with the chemistry and the relentlessness nature in the first few games.”

Admirals right-hander Frank Valentino went five innings and gave up just one hit and two earned runs while striking out six in his first professional start that ended with a win.

“I felt good out there. I wasn’t too nervous or overanxious or pressing too much,” Valentino said. “It was my first pro start but I wanted to go out there like I do with any start and that’s command the fastball and have some fun.”

“They were throwing strikes and getting ahead all night,” Phillips said. “Our first guy (Valentino), he had to get settled in, being his first professional start and all. Once he got settled in he got in a groove and he looked good. Just what I expected.”

Valentino’s one mistake came in the top of the first as Pittsburg took a 2-0 lead when the Diamonds’ No. 2 hitter in the lineup, Rafael Valera, hit a fly ball that just barely sneaked inside the right field foul line for a home run.

The Admirals came right back, however, in the bottom of the second off Pittsburg starting pitcher Brett Solano. Brandon Fischer led off the inning by getting hit by the pitch and eventually scored on a wild pitch from Solano. Moments later Chris Fornaci tied the game with a single to left field to drive home Vladimir Gomez, who had singled previously in the inning. Fornaci then scored as well to give the Admirals a 3-2 lead when David Kiriakos plated him with a single to center field. Kiriakos reached base in four of his five plate appearances and had two hits.

Valentino settled down after the first inning as he retired eight batters in a row. Valentino, who hails from New York, had to get out of jam in the fourth, as the Diamonds had runners on second and third with one out. He then got JJ Wagner to strike out and Curtis Gomez to ground out to end the inning.

“For me it wasn’t about changing anything (after the first inning), but more so fine-tuning stuff,” Valentino said. “I had to locate better. My pitch count was way up, which made me leave after five innings. If I commanded the fastball a little better, got ahead and stayed ahead, then that would have allowed me to stay in and pitch until the seventh, eighth or ninth.”

Meanwhile, Vallejo increased its lead to 5-2 in the bottom of the fourth when Pugh doubled home both Rian Kiniry and Kiriakos with a booming shot to the left-center field gap.

“I was basically studying how they were pitching me the first couple at bats and I realized I got a lot of fastballs inside,” Pugh said. “My second at bat I swung at some stuff I shouldn’t have been swinging at, so when I came up in the fourth I was looking to jump on something with the first pitch. Sure enough I got something low-middle-in and I got a good barrel to it.”

The Diamonds cut into the lead in the eighth as Brett Smith singled for just the second hit of the game and went to second on an error. Smith eventually scored after two wild pitches from relief pitcher, Miller, and Vallejo’s lead was 5-3. However, Miller limited the damage by striking out Rider Miconi to end the threat.

Benicia High graduate Reyes came into pitch a perfect ninth inning for his first save of the season. In the frame Reyes struck out two and retired Wagner on a groundball where Fornaci made a diving stab to his left at third base before bouncing up quickly to make a perfect throw to Graylin Derke at first.