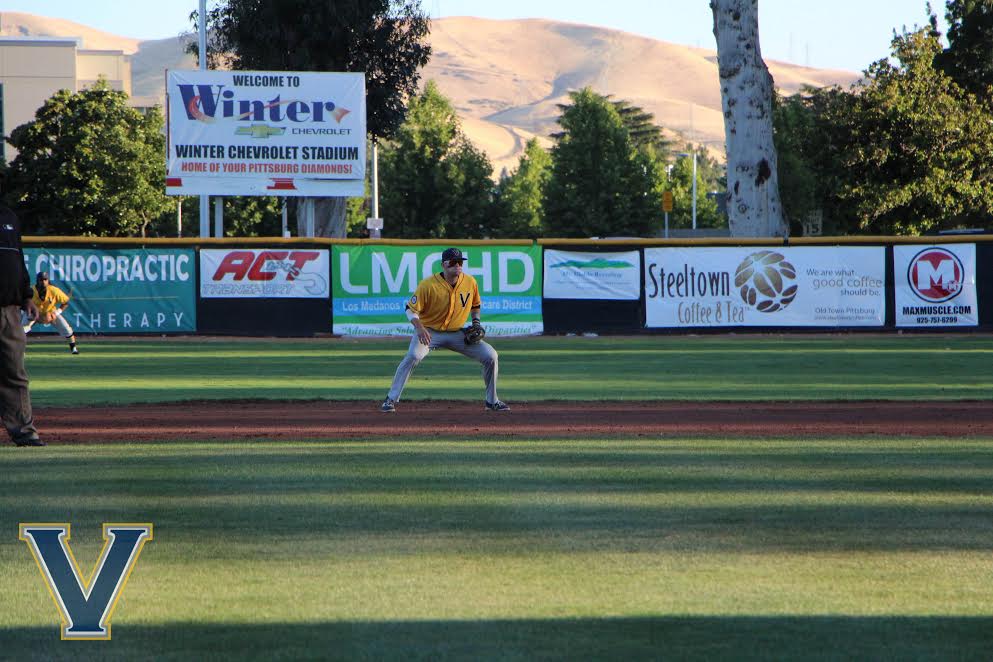 PITTSBURG, Calif. – The Admirals were able to get within two runs after an RBI single by Vladimir Gomez in the eighth, but the Diamonds held on for a 7-4 victory on Wednesday night at Winter Chevrolet Stadium. Vallejo falls to 6-17 overall and drops the first two games of the series, while Pittsburg improves to 13-9 and has now beaten the Admirals eight out of the first 11 matchups this season.

Pittsburg took a 3-0 lead in the second inning after four errors by the Admirals – two apiece by second baseman Graylin Derke and starting pitcher Marquis Hutchinson – as Vinny Guglietti, Yiecok Calderon and Javier Marticorena all scored.

Tillman Pugh drew a five-pitch walk in the third inning, went to second on a balk and came home on an RBI single by Derke (pictured above) that sliced the Pittsburg lead to two, 3-1. Bautista connected for his fourth home run of the season in the fourth inning and brought the Admirals to within 3-2.

Pittsburg, though, answered back in the fourth as Chad Highberger hit a two-run home run that scored Austin Fraker and gave the Diamonds another three-run lead at 5-2.

Tillman Pugh drew a walk with one out in the seventh inning, but was picked off by Pittsburg starter Dennis Neal after getting caught in between first and second base. Pittsburg added another run in the seventh after an RBI single by Guglietti brought home Wallace.

Pedro Perez drew a leadoff walk in the eighth against Neal and Shawn Payne doubled over the head of third baseman J.J. Wagner to give the Admirals runners at second and third with no outs.

Justin Martinez took over for Neal on the mound and Derke grounded out to first, scoring Perez. Gomez brought home Payne with a run-scoring single and trimmed the deficit to 6-4. After Gomez stole second, Chris Fornaci reached on an infield single to short and pushed Gomez to third. Bautista struck out swinging and Manny Reyes lined out to left as the Admirals left the tying runs on base.

J.J. Wagner’s first home run of the season gave the Diamonds a 7-4 lead in the eighth. A two-out walk to Highberger, a single by Jose Garcia and walk to Ordormar Valdez loaded the bases for Wallace who flied out to center.

In the ninth, the Admirals went quietly as Perez broke his bat on a line drive to second and Clarke was doubled off first to end the game.

Vallejo starter Hutchinson suffered the loss after allowing six runs (four earned), striking out six and walking two and falls to 1-4 this season.

Pittsburg starter Dennis Neal improved to 1-0 this season after allowing four runs in his seven innings with three strikeouts and four walks. Jordan Brink picked up his fourth save of the season after striking out one and walking one in the ninth.

The series finale is scheduled for 6:30 p.m. PT between the Admirals and Diamonds from Winter Chevrolet Stadium in Pittsburg. The Admirals Pregame Show begins at 6:15 p.m. with Tim Fitzgerald on the Admirals Baseball Network.