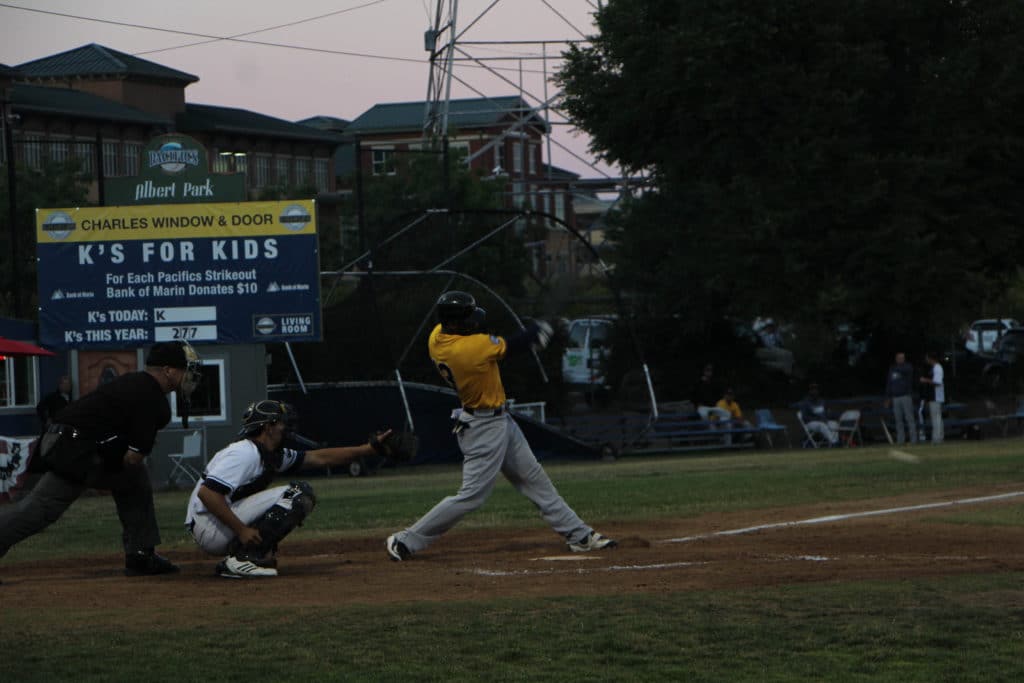 SAN RAFAEL, Calif. – A two-run home run by Tillman Pugh sliced a four run deficit in half, but the Admirals were unable to get any closer on Thursday night as Vallejo managed only one hit after the fifth and fell to the San Rafael Pacifics, 4-2 at Albert Park. San Rafael improved to 15-21 overall, while the Admirals slipped to 11-25. San Rafael has now won seven of the nine meetings with Vallejo this season and is 29-13 at Albert Park against the Admirals since the start of 2016.

San Rafael opened the scoring in the third after a two-run double by Jake Taylor that plated Cameron Monger and Demetrius Moorer.

The Pacifics took advantage of a leadoff single by Ricky Gingras in the fourth inning and a two-out double by Monger after Moorer drove both in with a single. Moorer was caught trying to steal second on a throw from Admirals catcher Mike Blanke to end the fourth.

The Admirals answered back in the fifth after a two-run home run by Tillman Pugh plated Vladimir Gomez, slicing the deficit 4-2. Brandon Williams led off the seventh with a single and stole second base, then went to third on a deep fly-out by David Kiriakos. Williams was stranded after Gomez grounded out to third.

The Admirals managed only one hit after the fifth inning and went quietly in the ninth against Michael Holback, who struck out the side and earned his first save of the season.

Admirals starter Demetrius Banks took the loss and struck out six in his six innings and was relieved by Tim Holmes in the seventh. Banks allowed eight hits and four runs with two walks and one hit batter, falling to 0-2 this season.

San Rafael starter Max Beatty collected the victory, allowing two runs and six hits in his eight innings of work, striking out nine with one walk. Beatty improved to 1-1 this season, needing only 106 pitches to get through his eight innings.

The Admirals welcome the Pacifics for the start of a three game series that begins tomorrow night at 6:35 p.m. PT inside Wilson Park in Vallejo. Lefty Brent Adheen (1-3, 6.63) is scheduled to start for the Admirals and right-hander Dakota Freese (2-1, 3.24) is the Pacifics probable starter.

The pregame show presented by Team Superstores begins at 6:15 p.m. with Dave Grant on the Admirals Baseball Network. Be sure to follow the Admirals on social media, including Twitter (@VallejoAdmirals).