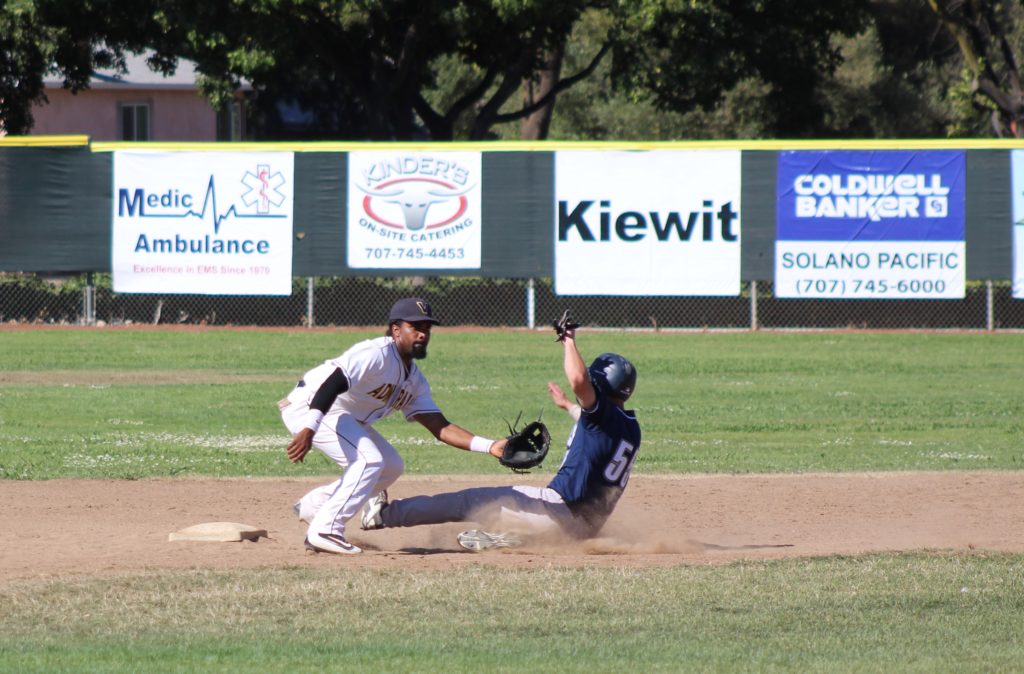 Vallejo Admirals’ management brought an avocado to the ballpark on Thursday for one of its players, Vladimir Gomez, to throw out for the ceremonial first pitch.

While management brought fruit to the ballpark, the entire Admirals ballclub brought the brooms.

Gomez, who plays outfield and infield for the Admirals, was a victim of mistaken identity by the New York Daily News of throwing an avocado at a bodega worker in the Bronx in May. To make fun of the mixup, Gomez threw out the ceremonial first pitch to Nick Akins before Vallejo’s game against the San Rafael Pacifics, but he used an avocado instead of a ball.

The Gomez who is seen attacking the bodega worker in a video, was a Brad Gomez, who throws left-handed not right handed like the Vallejo player, and looks nothing like the Admirals right fielder.

Also, it seems the only thing Vladimir Gomez is attacking lately is baseballs. His two-run homer in the bottom of the sixth gave the Admirals a 4-3 lead in an eventual victory by the same score. The win also gave Vallejo its first ever sweep against San Rafael at Wilson Park in the five years of the franchise. All three wins in the series came by one run and the last one put Vallejo (19-35, 7-8) all alone in third place in the second-half standings of the Pacific Association.

“Man, it’s a good win for the boys,” Admirals manager P.J. Phillips said, with a big grin. “We’re still not there yet where we want to be, but we’re getting there.”

Gomez, who finished with two hits and the game-winning RBIs, said the idea to throw out the first pitch using an avocado, was not his idea, but he went along with it.

“Yeah that was management’s idea,” Gomez, said with a laugh. “It was a good chance to help clean up my name. I’m not there in New York. I’m out here playing trying to help us get wins.”

Gomez was a big factor in the victory in the win that preserved the sweep. Trailing 3-2 in the bottom of the sixth, Akins reached first base with a leadoff walk. Then with one out Gomez turned a fastball into guacamole with a shot over the center field fence to give the Admirals a 4-3 lead.

“I was looking for a pitch to hit in the gap, something to help move the runner over and put him in scoring position,” Gomez said. “I put a good swing on it, and I wasn’t sure it was gone, but it was that feeling you get when you get a good pitch and you hit it. So I had to look at it for a second as it cleared the fence.”

It was the second time the Admirals had come back in the game. San Rafael took a 1-0 lead in the top of the first when Cameron Monger doubled and later scored on an RBI groundout by Jake Taylor.

The Pacifics (23-31, 6-9) scored again in the second when Juan Herrera and Zach Goldstein had back-to-back singles and Ricky Gingras drove home Herrera with a sacrifice fly to left to make it 2-0.

The Admirals tied the game in the bottom of the fourth when Akins walked and later scored on a Chris Fornaci single to left to make it 2-1. Quintin Rohrbaugh hit a sacrifice fly to center to plate Ryan Rodriguez and make it 2-2. Rodriguez singled earlier in the inning.

Vallejo starting pitcher and Benicia High graduate Peter Reyes kept Vallejo in the game for five innings, as he gave up nine hits while striking out two and walking none before leaving in the sixth.

Reyes left in the sixth after giving up a leadoff home run to Brent Gillespie, his 15th of the season, to make it 3-2 San Rafael.

“I was locating my fastball well after the second inning,” Reyes said. “I just tried to pitch, not think about the score and let the hitters put the ball in play and have our defense play.”

After the Admirals took a 4-3 lead, the Admiral bullpen shut down the Pacifics.

In the seventh it was Alex Fishberg who had a dominating fastball, as he struck out the side. He ended the night by striking out five batters in a row.

“Man, that guy is a bulldog,” Phillips said about Fishberg, who made his Admirals debut. “He came in throwing a lot of strikes. He was a little erratic at the start, but he quickly got it together.”

In the eighth inning Tim Holmes replaced Fishberg and ran into trouble with a first-and-third, no-outs situation. Holmes induced a pitchers best friend, however, as he got Aaron Brill to ground out into an inning-ending double play to David Kiriakos at short.

Sammy Gervacio pitched a perfect ninth inning, strike out the last two batters to earn his 10th save.

“It feels good to get the sweep. This sweep proves we can win these one-run games now,” Reyes said. “I think guys are just doing better in pressure situations. Guys are having good at bats with runners in scoring position and relievers are coming in and getting starters out of tight jams. Our team is a lot more clutch in the second half.”