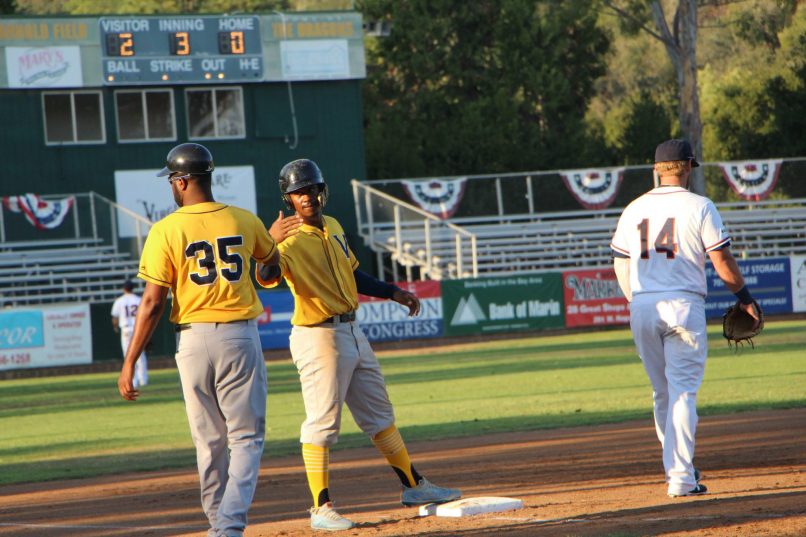 SONOMA, Calif. – The Admirals made two early runs hold up and the bullpen shut out Sonoma for the final five innings during a 2-1 victory Thursday night over the Stompers at Peoples Home Equity Ballpark at Arnold Field. For Vallejo, the series sweep tied them with Sonoma for first place in the second half of Pacific Association play at 12-9 and first time they’ve had a share of the Pacific Association second half lead this late in the season in franchise history.

The road sweep is also the first of its kind in franchise history for the Admirals over Sonoma after coming close twice during the 2014 season. Vallejo improved to 24-36 overall and 12-9 in the second half, while the Stompers fell to 40-20 and 12-9.

Vallejo has now won eight of its past nine overall and 11 of 14 since July 26.

The Admirals scored early for the third game in a row against Sonoma after taking a 2-0 lead in the first when Shawn Payne doubled and drove in David Kiriakos and Tillman Pugh (pictured above).

Sonoma scored in the second after Isaac Wenrich walked to open the inning and stole second base. After a ground out by Daniel Comstock that pushed Wenrich to third, a balk by Morel scored Wenrich.

In the fourth, Sonoma loaded the bases but Masa Miyadera lined out to right field after Vladimir Gomez made a diving catch down the line.

The Stompers threatened again in the fifth after Morel walked Marcus Bradley and Matt Hibbert to open the inning. A single from Brennan Metzger loaded the bases and knocked Morel from the game. Alex Fishberg struck out Joel Carranza and Isaac Wenrich and got Eddie Mora-Loera to fly out to right to strand the bases loaded for the second consecutive inning.

With two outs in the seventh for Sonoma, Kiriakos was unable to make a play on a sharp grounder by Carranza but Admirals reliever Andin Diaz struck out Wenrich to end the threat.

In the eighth, Payne reached on a throwing error by Sonoma shortstop Masa Miyadera but Gomez grounded into a double play and Graylin Derke grounded out to short.

Sonoma left 11 runners on base through the first eight innings, including the bases loaded in both the fourth and fifth. Vallejo left eight on base in the victory.

Mora-Loera struck out swinging in the eighth for Sonoma against Admirals reliever Tim Holmes, but a wild throw from catcher Mike Blanke got away from Derke at first, pushing Mora-Loera to second with nobody out. Scott David walked on seven pitches and Derrick Fox bunted to third, pushing Mora-Loera to third and David to second. Holmes struck out pinch-hitter Yuki Yasuda and got Marcus Bradley to fly out to left, leaving the tying run at third and go-ahead run at second.

In the ninth, Sammy Gervacio struck out Matt Hibbert swinging but walked Metzger. With one on and one out, Metzger was forced out at second after a ground ball from Carranza, who reached on the fielder’s choice. Gervacio got Wenrich to pop out to second for the final out.

Sonoma left 11 runners on base through the first eight innings, including the bases loaded in both the fourth and fifth. Vallejo left eight on base in the victory.

NOTES: Pugh extended his on-base streak to 16 games after a walk in the first inning and pushed his hit streak to 12 games overall … Rohrbaugh has now hit safely in seven straight games and has reached base in the last seven overall … Vallejo still has nine games left with Sonoma, two series at home and one on the road … with two singles, Kiriakos now has 12 multi-hit games this season … Gervacio collected his Pacific Association-best 13th save of the season.