The Pacific Association of Professional Baseball Clubs has released the nominees for its 2016 awards, and several Vallejo Admirals have a chance to take home some hardware. 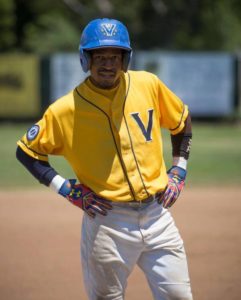 It was a career year for Sandford in several categories. He hit .293 with a .399 on base percentage, both career highs, along with driving in 30 runs, which was good for fourth on the team.

“I always thought once I figured out how to play my game in baseball I would be successful,” Sandford said. “Sometimes it’s better late than never.”

The former Royals farm hand was already voted MVP of the Admirals by his teammates, which is named after his predecessor Pugh, the 2014 team MVP. Sandford is also a nominee for the best defensive center fielder.

In fact, the winners of the Admirals team awards are the franchise’s lead candidates for the league awards. Pitcher and pitching coach Roman Gomez was voted pitcher of the year by his teammates, receiving the Dennis Neal award, who lead the Admirals in ERA in ’14, and pitched collegiately in Gomez’ home state of Texas.

Gomez finished the season on a tear, and went seven innings or more in four straight starts at one point. He had the most quality starts of any pitcher in the starting rotation, and even made two crucial relief appearances, including his first professional save.

The Admirals opening-day starter the past two seasons David Dinelli is also up for the league’s best pitcher. He was the recipient of the team’s “Biggest Heart Award” given to the most inspirational and toughest player on the roster, named after former catcher Isaac Wenrich. That award has taken on a double meaning after Wenrich fully recovered from a blood clot-induced heart attack this past offseason, and is still playing with Florence of the Frontier League.

The man who makes all those stretches at first base was voted the team’s best fielder, as 6’6” first baseman Lydell Moseby won the Elvin Rodriguez award. He is a nominee for the best defensive first baseman in the league.

“To be voted best fielder on our team is an honor because I truly feel like we had a bunch of talent out there for us all year,” Moseby said after winning the fielding award. “Guys like Darian Sandford would take away doubles and triples on daily basis, so I appreciate everyone for voting for me.

“And to be nominated for a gold glove is also an honor because I work hard at what I do, and to be even considered amongst some really great players is definitely a blessing.”

Moseby, the son of former Toronto Blue Jay and Detroit Tiger Lloyd Moseby, also had a good season at the plate finishing second in doubles on the team and tied for the lead in triples.

Catcher Cyle Figueroa garnered two awards from his peers, as he was voted the most improved player over the course of the season, an award name after original Admirals pitcher Nick Flory. 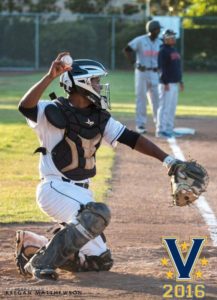 “To win two awards this season was such an honor,” Figueroa said. “Going into this season I wouldn’t have expected to win one, but getting two was just a whole different ball game. I have to give credit to all the veterans I had surrounding me this season. To win most improve on the year, I couldn’t have done it without the veterans. Learning the day-in and day-outs of professional baseball and how to get better everyday of a long season was crucial.”

Figueroa was also voted the most clutch performer on the squad, which earned him the Michael Cerda award, as the rookie finished the season hitting .260, and always seemed to come through in big moments.

“Mr. Clutch was probably my favorite one, just because I got a big boost of confidence,” Figueroa commented. “About half way through the season. P.J [Phillips] said to me, ‘every time you come up with a runner in scoring position, you get a hit,’ and from there I just always had that confidence when people were on base. I knew I was going to get the job done.”

Admirals manager P.J. Phillips is up for the manager of the year award. Phillips is the longest tenured Admiral, a second-round pick of the Angels in 2005 and the younger brother of the Reds’ Brandon Phillips. He took over the Admirals managerial duties on July 1st. He helped refocus the vets, and taught the rookies how to be pros. The team even rattled off a franchise record-tying seven-game win streak at one point under his watch.

Third baseman Gerald Bautista is also in the running for the league MVP award. The former Cleveland Indians minor leaguer hit .302 with four home runs and finished second on the team with 38 RBIs, despite missing the final two weeks of the season due to an injured wrist. Bautista is also a nominee for the best defensive third baseman.

Pitcher Marquis Hutchinson is on the ballot for two awards. He is a nominee for rookie of the year and starting pitcher of the year, as he went 6-5 on the season with a 3.61 ERA.

Closer Josh Evans and set-up man Luis Ferreras are both nominated for reliever of the year. Evans led the team in saves with seven in his second season as an Admiral and had a 3.02 ERA. He even made five starts for the Admirals before moving back to his more familiar relief role.

The former Dodger farm hand Ferreras had a 2.40 ERA with two saves of his own, before having to return to the Dominican Republic for a prior family commitment.

Personnel from each franchise determined the nominees, and three members of each team will vote for the winners of the Pacific Association Awards. Typically it’s the manager, media director, and a member of the front office that vote for the league’s awards.

The winners will be announced over the next few weeks, much like how the big leagues announces their winners over a span of a week or more after the postseason concludes.