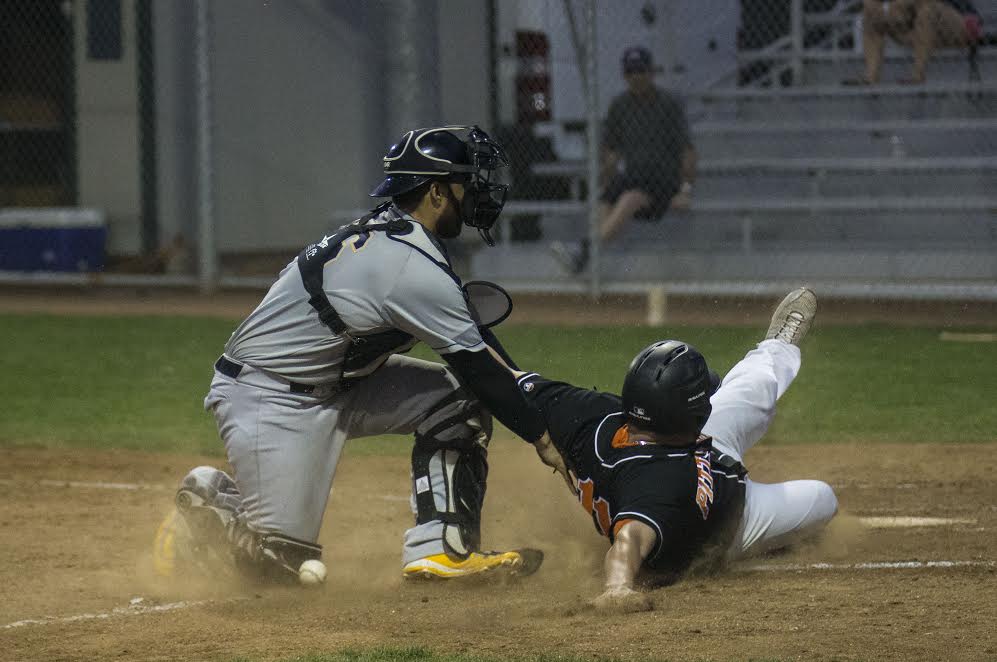 PITTSBURG, Calif. – On a warm evening where temperatures soared to 102 degrees, the Admirals lost for the fifth straight game after falling to Pittsburg 6-2 at Winter Chevrolet Stadium. Vallejo fell to 4-10 overall this season, while the Diamonds improve to 8-5 and have won four straight games.

Again the Admirals took a lead but were unable to hold on, as Pittsburg scored three times in the second, twice in the seventh and once in the eighth to overwhelm the Admirals.

The Admirals took the first lead of the game in the first inning after an RBI ground out by Nick Akins brought in Pedro Perez. Vallejo would take a 2-0 lead after an error by Pittsburg second baseman Ordomar Valdez enabled Andrew Rubalcava to score as Tillman Pugh drove him in.

Pittsburg, however, answered back with three runs in the second inning after solo home run by Vinny Guglietti and a two-run double by Austin Fraker gave the Diamonds a 3-2 lead.

Pittsburg starter Corey MacDonald allowed only two hits and struck out three after leaving with the lead with one out in the seventh inning. MacDonald retired the Admirals in order in both the third and fourth innings, needing only 21 pitches to dispatch Vallejo in order. MacDonald improved to 1-1 this season with the victory.

The Diamonds added two more runs in the seventh after an RBI double by Wes Wallace and RBI ground out by J.J. Wagner.

Admirals starter Marquis Hutchinson worked seven innings and allowed five hits and five earned runs and suffered his second loss of the season and fell to 1-2.

The Admirals managed only two hits through the first eight innings, as the combination of MacDonald and reliever Dylan Hecht kept Vallejo off balance all night long.

After Admirals reliever Grayson Weber retired the first two Diamonds in the bottom of the eighth, Yiecok Calderon tripled to deep center and Guglietti doubled him home to give Pittsburg a 6-2 advantage. With the bases loaded, Weber got Wagner to pop out to second and retire Pittsburg in the eighth.

In the ninth, the Admirals went quietly against Hecht to fall for the fifth game in a row and for the fourth time in five tries against Pittsburg this season.

The series finale is scheduled for 1 p.m. PT Sunday between the Admirals and Diamonds from Winter Chevrolet Stadium in Pittsburg with temperatures again expected to be in the triple digits. The Admirals pregame show begins at 12:45 with Tim Fitzgerald and Dave Grant.