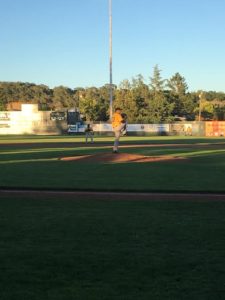 SONOMA, Calif. – Andrew Rubalcava’s first home run of the season tied the game at one in the seventh inning but the Admirals allowed four seventh-inning runs to fall 5-1 to Sonoma on Thursday night at Peoples Home Equity Ballpark at Arnold Field. The Admirals slipped to 4-8 this season and the Stompers improved to a Pacific Association-best 9-3 overall.

For the second consecutive night, Sonoma was able to string together late inning runs – this time in the seventh – to beat Vallejo for the fifth time in six tries this season. The Admirals left eight runners on base from the third through the seventh innings, while the Stompers left
seven through eight innings.

Locked in a scoreless draw, the Stompers took the first lead on Eddie Mora-Loera’s solo home run in the sixth, but Rubalcava’s homer tied the game for the Admirals in the seventh.

In the bottom of the seventh, Matt LoCoco reached on a groundball to first after Admirals reliever Marc Rutledge was unable to hold onto the throw and then threw it away after LoCoco took second base. A bunt single by Yuki Yasuda pushed LocCo to third and after Yasuda stole second base, Rutledge walked Matt Hibbert to load the bases.

Demetrius Banks relieved Rutledge with the bases loaded and facing Scott David allowed a two-run single that scored both LoCoco and Yasuda to give the Stompers a 3-1 lead.

Brennan Metzger bunted Hibbert and David over and Mora-Loera delivered again for the Stompers with a two-run double that extended the lead to 5-1.

In the ninth inning, the Admirals got a two-out single by Rubalcava, but Tillman Pugh struck out as Sonoma swept the Admirals in the three-game series.

Rutledge suffered the loss for the Admirals, allowing one hit and three runs (two earned) and fell to 0-2 this season.

The Admirals travel to Pittsburg tomorrow for a 6:30 p.m. first pitch from Winter Chevrolet Stadium with Christopher De Leon scheduled to start his first game of the season for Vallejo. The pregame show on the Admirals Baseball Network begins at 6:15 p.m. with Tim Fitzgerald and Dave Grant on the call.