Admirals Walk It Off in 9th on Sandford’s Base Hit 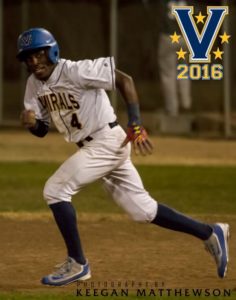 The Vallejo Admirals again were comeback kings on Saturday as they erased a 6-0, sixth-inning deficit to win 7-6 over the San Rafael Pacifics on a Darian Sandford single that drove home Lydell Moseby in the ninth.

Vallejo (5-6) scored three runs in the bottom of the sixth at Wilson Park and two more in the bottom of the seventh to cut the Pacifics lead to 6-5. In the top of the ninth Jackson Valera led off with a solo home run to tie the game. Valera had four hits and two RBIs in the game and is currently hitting .488 on the season.

With one out, Moseby then drew a walk and Pedro Perez singled to put runners on first and second. Gadiel Baez flew out to right, which allowed Moseby to advance to third. And then Sandford singled over the outstretched glove of San Rafael’s leaping shortstop, Daniel Gonzalez.

Getting the win for the Admirals was Hector Ortiz, who pitched the ninth and gave up just one hit.

Reliever Marquis Hutchinson gave it a go for the Admirals as a starter, but went 1 and 2/3 innings and gave up four earned runs on three hits. Carlos Pinales pitched well in relief by going four innings and only give up three hits and no runs while striking out two. He even had a three-pitch inning.

The two squads play again Sunday but this time in San Rafael with a 1 p.m. game start. You can listen live on our home page.