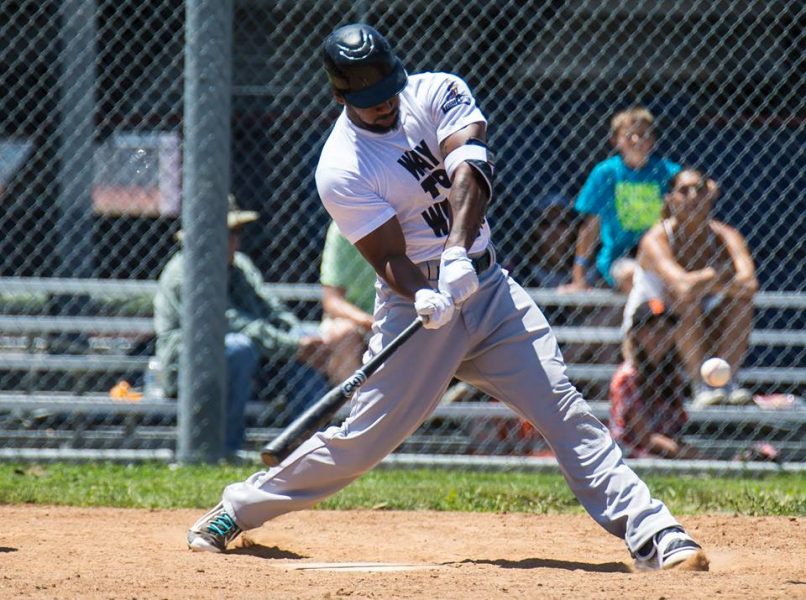 Finally, the door came crashing down with hinges, latches and screws flying everywhere.

In what looked like a moral defeat, the Admirals instead rallied for two runs in the bottom of the ninth to edge the San Rafael Pacifics 5-4 on Friday in the 2017 Pacific Association opener for both teams at Wilson Park.

Vladimir Gomez knocked in the tying run with a soft single to right and Nick Akins (pictured above) won it by singling past San Rafael shortstop Spencer Nielsen as Graylin Derke scored the game-winning run.

The Admirals loaded the bases for the fifth time of the game in the ninth inning. The previous four opportunities did not produce even one run.

“It was great to get that monkey off our back,” said Vallejo right fielder Chevy Clarke, who was 3-for-4 and reached base five times while scoring the game-tying run in the ninth. “I know guys were getting a little anxious to come up big but we made some adjustments to pull the win out.”

The Admirals trailed 4-0 after three innings against one of the league’s top franchises, but Vallejo chipped away with two in the sixth and one in the seventh against San Rafael’s bullpen.

“It was just the same as any other time; that’s the way I think about it,” Reyes said. “It’s the same distance, the mound is the same and I’ve played here before.”

“As a team, we were getting a little frustrated. I think we were a little tight to start the game,” said Derke, who had two hits and two RBIs in his Admirals’ debut. “I think we loosened up in the dugout a little bit, cracked a few jokes. … and then some balls started falling finally. We started putting the ball in play. I think we were getting a little too big, including myself. With the bases loaded and runners in scoring position, I think we all just wanted to get it all done with one swing.”

San Rafael did not have nearly as many base runners as Vallejo but was able to capitalize on its opportunities against Dinelli, who was making his third straight opening day start for the Admirals.

The Pacifics led 2-0 after scoring two in the second. Brent Gillespie and Nick Zaharion singled to start the inning before Dinelli struck out Ricky Gingras. The next batter, Nick Rizzitello, hit a high fly ball down the right-field line. Clarke, the right fielder, made a long run and dove, but the ball bounced off his glove. Both runners scored and Rizzitello pulled up at third for a triple.

“The wind carried it and I just tried to make the play for my team,” Clarke said.

One batter later, No. 9 hitter Spencer Nielsen knocked in Rizzitello with a single to center.

San Rafael made it 4-0 in the fourth on a long home run to left field from Miles Williams.

Pacifics starting pitcher Dakota Freese was effectively wild, walking seven in five innings but allowing just two hits, both of those coming from Clarke. Freese struck out six to get out of many of his jams.

Vallejo cut it to 4-2 in the sixth against San Rafael reliever Jake Pintar. Clarke doubled down the line in left and scored on Derke’s opposite-field double to left-center. Derke moved to third on an error and scored on Tillman Pugh’s sacrifice fly. The Admirals had a chance to score more with runners at first and third but Andrew Rubalcava lined out hard to first base to end the threat.

Vallejo cut it to 4-3 in the seventh when Shawn Payne (pictured below) singled and eventually scored on Derke’s sacrifice fly. 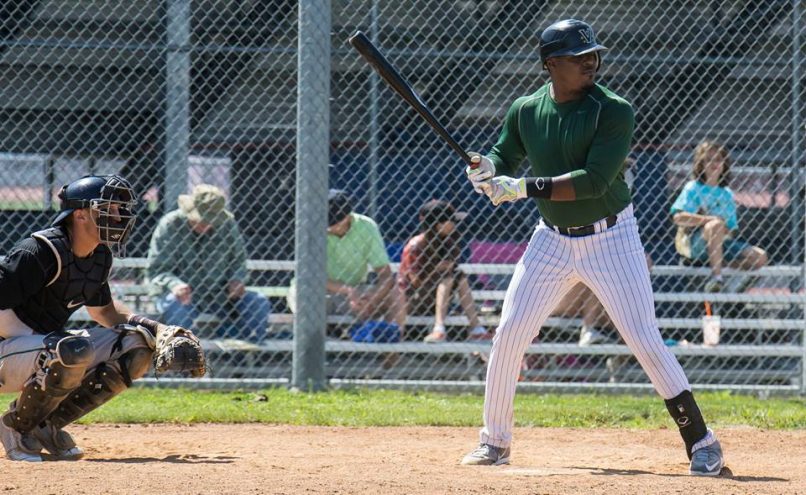 The Admirals loaded the bases again in the eighth with one out against San Rafael reliever Garrett Granitz, but Granitz struck out Payne looking and got a ground ball from Gerald Bautista to end the inning.

In the ninth against Pacifics closer Yohailys Millord, Clarke walked on four pitches to lead off the inning, Derke singled to right and Pedro Perez’s beautiful bunt single down the third-base line loaded the bases.

Gomez lofted a single to right to score Clarke before Pugh popped the ball up to short for the first out. Akins, however, delivered a hard smash to end the 3-hour, 41-minute marathon.

Notes: The Admirals improved to 4-1 on opening nights. … Vallejo stranded 15 runners through eight innings before the big ninth. … San Rafael pitchers surrendered 11 walks. … San Rafael’s most dangerous hittter, Jake Taylor, was 1-for-5 with his only hit a bad-hop single in the first inning. … Vallejo Mayor Bob Sampayan threw out the ceremonial first pitch.