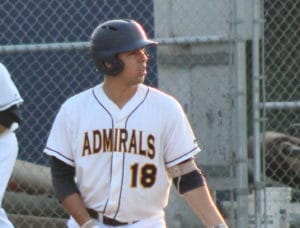 The former UC Davis star had a go-ahead, two-run double to propel the Vallejo Admirals past the San Rafael Pacifics 11-9 in the second game of a Pacific Association series at Wilson Park.

The series is tied at a game apiece with the Admirals trying to win the series finale on Sunday. Vallejo is 13-10 in the second half and trails Sonoma by just one game for first place.

Vallejo trailed 9-7 in the sixth before a David Kiriakos homer made it 9-8. Diaz then knocked in Graylin Derke and Shawn Payne to make it 10-9. The Admirals added an insurance run in the eighth for the final margin of victory.

The Admirals trailed 2-0 before a seven-run fourth. Chris Fornaci had a two-run double, Quintin Rohrbaugh and Tillman Pugh both had run-scoring doubles, Nick Akins had an RBI single and Chevy Clarke had a two-run homer, his eighth long ball.

The Pacifics, however, scored seven runs themselves in the fifth to take the lead back.

Demetrius Banks (4-3) picked up the win in relief and Sammy Gervacio notched his league-leading 15th save with a scoreless ninth. Tim Homes pitched two scoreless innings of relief as well.

Kiriakos was 3-for-4 while Fornaci and Diaz both had two hits.

The Pacifics fell to 25-37 overall, 8-15 in the second half. Jake Taylor cracked home run No. 18 for San Rafael. Cameron Monger hit his fifth homer.

The Admirals will have a Public Safety Day Sunday at 1 p.m. honoring local fire and police departments, EMT workers and other first responders, who all get in free with their I.D. or badge.