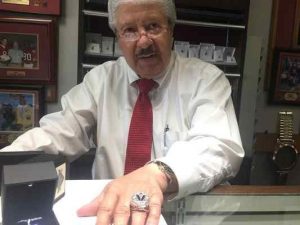 The closest Bill Mares has designed team jewelry was a bunch of watches for Vallejo city employees years ago.

Fighting deadline — and working around 30 or more daily watch and jewelry repair jobs at the Vallejo Plaza location — Mares produced the stellar ring in time for Opening Night on May 31.

“They players love them. They really do,” Reilly said Friday afternoon, about an hour before his team hosted the Napa Silverados at Wilson Park.

“I’m proud to do it for them,” said Mares, who, as a Vallejo High School graduate in business here since 1971, fit the requirements by the Admirals owner.

“I wanted it to be sourced from the best of Vallejo and immediately went to Bill,” Reilly said.

After negotiating the cost — “I’m practical and Bill’s an artist,” said Reilly — the final product includes 103 crystal stones surrounding an impressive “V.” Two red seams give the ring a baseball look and each player’s name and uniform number make each ring unique. Plus, obviously, different sizes.

It’s not quite the 219 diamonds and 17 green sapphires adorning the ring of the Super Bowl winning Philadelphia Eagles, but it’s mighty nice by minor league baseball standards.

“I copied it,” Mares joked of the Eagles’ ring. “Mine is totally different.”

The original design wasn’t quite as ornate, Mares said. However, Reilly wanted to change the design, saying his players “wanted bling.”

“So we started all over again from scratch,” Mares said.

It all worked out, Reilly said.

“The rings are fabulous, as they should be. They’re not generic, he said. “My wife (Debra) wanted something the players would like and be proud of.”

Though acknowledging the rings “are to honor the players,” others who have been pivotal to the team’s success — and survival — were rewarded, including Buck Kamphausen, who owned the team briefly when it struggled in 2013.

“Buck’s been a great friend of the team,” Reilly said.

Also getting a ring was former media relations director and broadcaster Tim Fitzgerald. Now working at California Maritime Academy, Fitzgerald was grateful to get a ring.

“I love it,” Fitzgerald said. “For me it’s a proud representation of the five years of hard work I put in here, especially since I got to influence the product on the field last season.”

Including the Admirals’ staff and some sponsors, 37 rings were made, Mares said, with seven “V” pendants created for women as requested by Reilly. Because several players from 2017 have moved on, Mares said their rings would be shipped.

Mares said the active Admiral players were so hyper when presented Opening Night with the rings, he takes credit for their 15-3 blasting of the Pittsburg Diamonds for that May 31 game.

“The players were just cookin’ that night,” Mares said. “They were so excited. They didn’t believe we’d do something like that.”

So the jeweler, basically, took credit for the team’s 2018 debut win?

“I am,” Mares said grinning. “But just for Opening Night.”

Mares declined to say what the final bill was for the rings, pretty much calling it a labor of love.

Yes, Mares made an Admirals ring for himself, complementing the five Super Bowl rings from his association with the San Francisco 49ers. The 75-year-old Mares wouldn’t mind five Admiral rings.

Right now, however, Reilly said the team’s working on two.