Congressman Mike Thompson to throw out first pitch on Friday 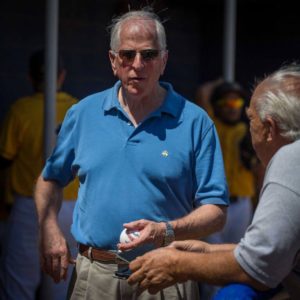 Congressman Mike Thompson returns to throw out another ceremonial first pitch Friday, August 26th at Wilson Park in Vallejo.
Representative Thompson began the tradition in 2014, and became a sponsor of the Admirals in 2015. He even signed a one-day contract

“I’m excited to once again be able to throw out the first pitch at a Vallejo Admirals game, and I’m honored to have the privilege of sponsoring our team again this season,” Congressman Thompson said. “I hope to see a big turnout and a lot of team spirit from our Vallejo community for what I’m sure will be a great game. I encourage everyone to get out and support our team!”

Representative Thompson will certainly have a big crowd on hand this Friday, as about 500 cadets from the Cal State Maritime Academy in Vallejo will be in attendance.

Congressman Thompson is an avid baseball fan as well, and shared some of his fondest memories of being a baseball fan when he came to throw out the ceremonial first pitch last year.

“I played in the first little league team in St. Helena growing up, and then pony league,” Thompson revealed. “And then in junior high and high school, I announced games and kept score for for men’s and women’s softball and professional men’s games of the old Blue Sox.

Thompson fires a strike in his first appearance in 2014

“I saw my first Giants game in 1959, I can remember it to this day. Mike McCormick was the pitcher, and it was Willie McCovey’s rookie year back whey they were still playing at Seals stadium in San Francisco.”

Thompson represents California’s 5th Congressional District, which includes parts of Contra Costa, Lake, Solano and Sonoma Counties. He was first elected to Congress in 1998, after previously being the first Vietnam veteran elected to the California State Senate in 1990, and is well known for working with both sides of the aisle in Congress.