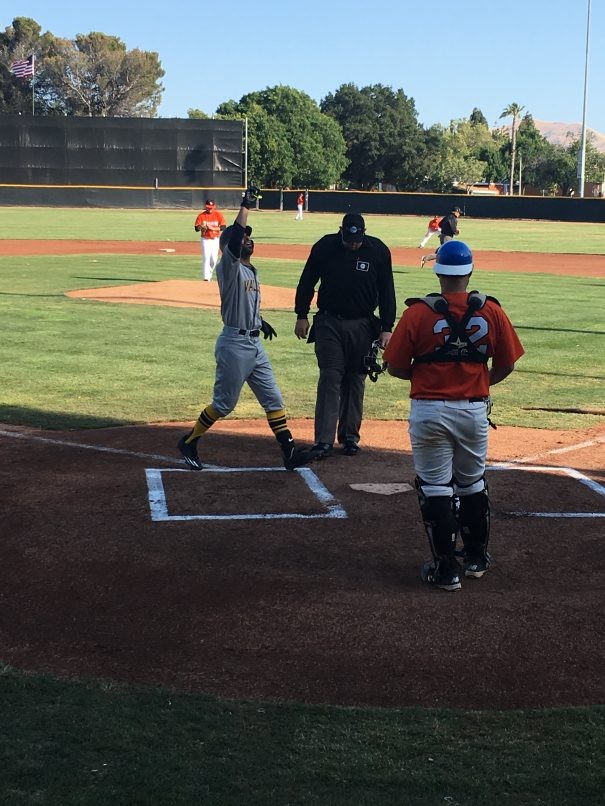 PITTSBURG, CALIF. – Behind eight shutout innings from Martin Cronin, the Vallejo Admirals cruised to a 6-0 defeat of the Pittsburg Diamonds at Winter Chevrolet Stadium. After sustaining the season’s first loss last night, the Admirals gained a split of this two-game set. David Kiriakos homered in the game’s second at-bat, and for the second night in a row, Vallejo put three runs on the board during its first turn.

The initial support was more than enough for Cronin, the one-time Sonoma Stomper, who did not allow a hit until Ryder Miconi doubled with two outs in the fifth. The Admirals starter threw 115 pitches, struck out three Diamonds, and gave up three hits and two walks. He has begun his Vallejo stint with 13 innings of no earned runs allowed.

Kiriakos’ homer and Miconi’s double were the only extra-base hits of the night for either team. Graylin Derke’s RBI knock during the first-inning rally was the only other run-scoring hit for Vallejo. Nick Akins, d’Aundray Van Slyke, and Cyle Figueroa each contributed sacrifice flies to the cause.

Diamonds starter Brett Solano matched up with Cronin, as the two had done in the season opener, and while Solano improved on last Thursday’s performance, he still took the loss. He was charged with two of Pittsburg’s three errors tonight; only two of the five runs allowed on Solano’s ledger were earned.

Alex Leach and Cameron Hatch held the Admirals to one run during their four innings of relief. Cronin gave way to Luis Ramirez in the ninth, and in his first Vallejo appearance, Ramirez retired the first two men he faced, then managed to walk the bases loaded as he hunted for the 27th and final out. Ramirez then retired Miconi, who had two of Pittsburg’s three hits, to end the game.

Now off to a 5-1 start, and remaining in first place after Wednesday’s action, the Admirals head home to face the San Rafael Pacifics on Thursday and Friday evenings. Right-handers Frank Valentino (1-0, 3.60) and Dalton Bernardi (1-0, 7.20) are Vallejo’s scheduled starters. The Pacifics’ projected starting pitchers were not available at the time of this release. Both games are slated for a 6:35 first pitch.

Admirals Pride Night also takes place Thursday, benefitting Solano Pride Center, and Vallejo players and coaches will wear rainbow-colored Pride jerseys for the game. Those jerseys will go on silent auction throughout the evening, and all guests are welcome to bid on their preferred player’s uniform top. The winners of the auction will be free to take that player’s jersey home at night’s end. All proceeds from the auction will go to Solano Pride Center, and the support of the county’s LGBTQ community members and allies. Tickets are available round-the-clock at bit.ly/admiralstickets.