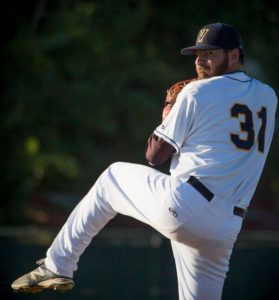 a double play. For Vallejo Admirals pitcher David Dinelli, it was a three-run-homer on Saturday evening.

In the last game of his 10-year professional career, Dinelli earned a win after his teammates rallied for five runs in the bottom of the sixth, three of them coming off the bat of Andrew Rubalcava, whose three-run bomb to center gave Vallejo a 9-8 lead in the eventual 10-8 win.

Dinelli, 29, who was once drafted by the Houston Astros, announced recently that this season will be his last in professional baseball. The right-hander, who grew up in Folsom, had been the Admirals’ Opening Day starter the last two years.

“I think what I’ll remember here the most is the people of this town,” Dinelli said. “All the friendships I made with teammates and all the players I was able to see move up to higher leagues. It’s been great.”

Dinelli (6-7) pitched well for the first five innings, giving up just four hits and one run while the Admirals staked him out to an early 5-1 lead.

The Admirals (32-45, 17-21) scored first in the bottom of the third when Darian Sandford doubled just inside the left field line to drive in Alian Silva, who had singled earlier in the inning.

Sandford stole third base, his 93rd steal of the year, and then scored on a sacrifice fly by Vladimir Gomez. Just moments later, Moriarty walked and later scored to make it 3-0 in favor of Vallejo on a double to center by Joseph Hicks.

Hicks would score soon after to make it 4-0 on an RBI single right back up the middle by Lydell Moseby.

Moseby would leave the game a few minutes later due to an ejection when he argued with the home plate umpire after being thrown out at home on a double by Cyle Figueroa.

After Pittsburg scored in the top of the fifth the Admirals got the run right back when Rubalcalva tripled to center and then scored on a double off the center field wall by Moriarty to make it 5-1.

“Man, that boy can hit,” Admirals manager P.J. Phillips said of Rubalcalva, who finished just a double short of the cycle. “When he gets his pitch, he doesn’t miss it. He had a very good night tonight for us.”

Dinelli pitched very well through five innings, but in the sixth inning things fell apart for him. Dinelli walked Jordan Yallen with the bases loaded to make it 5-2 and then the Diamonds strung together five consecutive RBI hits to take an 8-5 lead.

After the Diamonds (35-42, 16-22) tied the game at 5-all, Admirals manager P.J. Phillips decided to leave Dinelli in the game. Former Admiral Jordan Hinshaw singled to left to drive home Jose Garcia for a 6-5 Diamonds lead. After Nick Oddo and Rich Mejia singled the Diamonds’ lead was increased to 8-5.

“Little by little, even though I was trying to fight it, I started thinking about my whole career while out there on the mound at the end,” Dinelli said. “I thought about my last year in college, being drafted by the Astros, my time with the Admirals. Little moments kept popping into my head.”

Vallejo hung tough, however, and not wanting to let Dinelli go out on a down note, took the lead in the bottom half of the frame, although with a little help. With two outs, Gomez hit a dribbler to short but Garcia couldn’t handle it and it went through his legs and allowed Figueroa to score and make it 8-6. The big damage came moments later when Rubalcalva hit a towering three-run homer to center to make it 9-8 in favor of Vallejo.

“Well (Chris) Cummings (Pittsburg’s starting pitcher) is a tough lefty,” Rubalcava said. “I went up to the plate in that bat looking fastball and then I took one. He came right back with a curve but it was way off the plate so I knew he didn’t have anything left with that pitch. He threw another fastball, I got a good swing on it and it worked out well for us.”

Before Pittsburg could blink the lead was increased to 10-8 when Moriarty hit a homer to center in almost the same spot as Rubalcalva’s homer.

Dinelli got one out in the top of the seventh before Josh Evans came into the game to relieve him. As Dinelli walked off the field he tipped his cap to the fans and the press box as the crowd game him a standing ovation. His teammates lined up near the dugout to offer him hugs and congratulations.

The Admirals tried to increase the lead in the bottom of the eighth when Sandford walked and then stole two more bases, his 94th and 95th of the season. However, Vallejo couldn’t get him home with nobody out.

Evans got into some trouble in the top of the ninth, but with two outs and the bases loaded he got Tyler Nordgren to ground out sharply on a comebacker, and the game and the win belonged to Dinelli.